‘Black Sails’ star Ray Stevenson on being an actor: ‘I had no choice’ 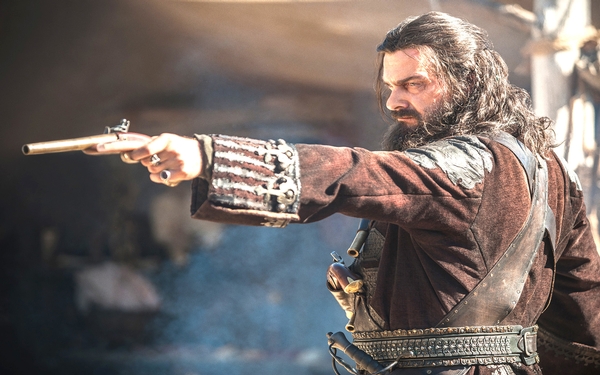 PASADENA, Calif. — Ray Stevenson doesn’t look like an actor. At 6-foot-4 he might be a bouncer, or a longshoreman, or a Wichita lineman. But Stevenson didn’t choose acting. It chose him, he says.

“I had to face up to the realization and it was an epiphany: that what I thought was a decision to be an actor was false. There was no decision to make. It’s a vocation. I had no choice. I had to accept to throw myself into it with no guarantee but to launch and just go, ‘You know what? I can’t fight it anymore,’” he says in a sheltered corner of a hotel hallway here.

“I used to think it was an alter-ego. I never told anybody I wanted to be an actor when I was growing up. I went to drama school when I was 27. . . I was 29 when I finished. I couldn’t do this if I didn’t truly love it. It beats you up. And now it takes me away from my children. It has to be worth it. It’s like God’s playing tennis with me, pah, pah, pah,” says the British-born performer, batting an imaginary ball.

Stevenson’s rugged looks have cast him in a gallery of roles from “Dexter,” to “Divergent” to “Rome,” and now he finds himself as the notorious pirate, Blackbeard, in “Black Sails,” which returns for another season on Starz.

His first love was oil painting and he was working as an interior designer when he met an Australian actor who’d come to London to seek representation. His advice to Stevenson was to attend evening drama classes. At 25, Stevenson was scared to death to try it, but he summoned the courage.

His family had never frequented the theater, and so he would plunk down 10 pounds to stand in the back of the room and watch the performers. When he saw John Malkovich in “Burn This,” he says he realized there was a mystical connection between the player and the audience. “I said, ‘You know what? There’s a validity here.’ These few moments and your life accelerates. I accepted it. The decision has already been made.’”

Probably best known as the dauntless Legionary Titus Pullo in “Rome,” Stevenson, 51, says that changed his life. Not in the way one would think.

“I was in Rome, had just started it, and it was the saddest time in my life,” he recalls. “And I’m literally going through a half-bottle of whiskey a night while doing this work and challenging this work, to be worth it. It was the end of my marriage. It’s not just the end of a marriage, it’s the end of your dreams. All gone,” he lowers his voice.

“I found myself, ‘I’m 40 years old and I’m not a father. How am I going to find the right girl, court the right girl, marry the right girl and be a father at 40 years old?’ I went, ‘Who the hell to you think you are? Mr. Wonderful? Who told you had this God-given right to be a natural father? Maybe on your path you’ll be involved in an orphanage or you’re going to adopt a child that’s going to need this love. What’s all this about?’ And the weight fell off me and I went, ‘Maybe there’s a child that needs me 10 years from now that I haven’t even met yet.”

He says at that point he vowed to have fun for the next three years. I said, ‘I’m not a bad guy. Anything with a pulse and a skirt I’m going to treat them like royalty and have a laugh. And I’m gong to move to a smaller apartment.’”

He arranged to meet with the landlady of this smaller apartment. “And in she walks. ‘So, you want to rent my apartment?’ “I went, ‘I have a plan for the next three years.’ And now I’ve got three boys,” he smiles.

Stevenson has been with his erstwhile landlady, Elisabetta Caraccia, a Ph.D. in anthropology, ever since. They live on the island of Ibiza and have three sons, 8, 4 ½, and 1 ½.

They haven’t married. “She sees family as IT,” says Stevenson. “She said, ‘Don’t you ever ask me (to marry).’ I said, ‘I get it.’ About a year later I thought, ‘You know, until she’s properly asked this might be some conditioned idea.’ So I plucked up the courage and asked her. She was furious with me, really hit the roof. But what gave me heart was when she turned me down for marriage, it hurt me. And I didn’t expect it. That’s when I knew I’d meant what I’d said. Then I could accept her refusal.”

Rydell High will be celebrating music and dance again when Fox features “Grease: Live” on Sunday, starring Julianne Hough as Sandy, Vanessa Hudgens as Rizzo and Aaron Tveit as Danny. The Broadway musical and film has been updated with contemporary dance and an on-set audience that will sometimes become characters in the show. So far, live TV productions like “Wicked,” “Peter Pan,” “The Sound of Music” have served up well on live TV. Tveit (Les Miserables” “Gossip Girl”) says, “I think it’s an exciting time that these live musical events have done so well. There aren’t a lot of programs that a whole family can sit down together and watch and enjoy. I mean, I think parents and their kids watch totally separate shows, and these things are evenings that appeal to a whole family, and it can bring these families together.”

‘SHADES OF BLUE’ IS CLEARED FOR TAKEOFF

Ever wonder how a TV show climbs its way from the bottom of the script pile? Here’s how it went for NBC’s “Shades of Blue.” It started when writer Adi Hasak wrote a spec script (which usually has no chance of seeing the light of day.) “I got it to (producer) Elaine Goldsmith Thomas, who is a true hero in putting this show together,” he says.

“I didn’t know Elaine. She embraced the script. She got the script to Barry Levinson — which was ironic because when I was writing the show — I had ‘Homicide’ (executive produced by Levinson) literally sitting on my desk. At that time, I also met Nina Wass, who’s an executive on the show, and Ryan Seacrest. And they were just amazing. I just introduced them to Elaine. So the four of us were the initial team. Then at some point, Elaine said, ‘You know, Jen would be great for this.’

“And I had no idea who she was talking about. I’m not on a first-name basis with Jennifer Lopez. . . And she’s like, ‘Jennifer Lopez.’ And in the altitude that I fly in, that’s the wish list. That’s the top of the list. I rolled my eyes and said, ‘Yeah, why don’t we get Jennifer Lopez? That’s a great idea.’ Two weeks later we’re sitting with Jennifer Lopez and Benny Medina, and my knees are shaking.

“We went to NBC and pitched out the entire show to NBC and, 15 minutes later, got a text that this was an order contingent if Jennifer wanted to do it.” She did. And that’s how a TV show is born.

MULDER AND SCULLY BACK WITH ‘THE X-FILES’

“The X-Files” falls into its regular timeslot on Mondays this week for six episodes. And while we never thought we’d see the day when Mulder and Scully would be back on the tube, after 13 years they’re home again on Fox.

David Duchovny says he decided to return when he read the first script. “Obviously I knew I was going to do it. We were signed to do it at that point. But the work or the kind of imaginative reality of it, which is always, to me, the only reality of it. Probably when I got that first script and started to think about, ‘How are we going to do this? What do we do? What do we do now?’”

As for Gillian Anderson, she says she realized she was truly coming back when she attended Comic-Con. “I did a Comic-Con right before I was about to start shooting, and it wasn’t until I sat on a panel in front of the audience and the degree of enthusiasm that there was for it … and then the theme music played, and it was the first time I think in my life of ‘The X-Files’ that I completely got what it might be like for an audience to sit on a couch — if they ever do that anymore — in front of their television and hear that tune again for the first time when a first episode is going to be aired. And I got excited with them, and it occurred to me that I was starting shooting on Monday.”