‘Fifty Shades of Black’ follows the footsteps of fine spoofing 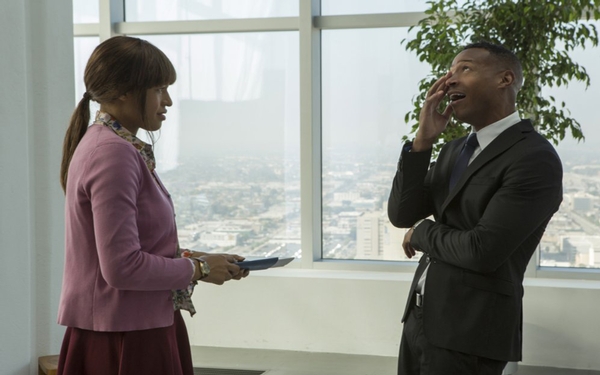 As an actor, writer and producer, Marlon Wayans has parodied everything from horror movies to inner-city dramas to dance-competition films. But he insists he doesn’t go out looking for subjects to spoof. They have a way of finding him.

“I think if you go looking for something to parody, it’s not going to be genuine,” Wayans, 43, said on a recent afternoon. “Something has to hit you, and once you start putting your pen to pad, it’s just joke after joke after joke — and before you know it, you have a movie.”

“Sex and comedy go hand in hand,” Wayans said. “Sex is something everybody does, and every comedian has five to 20 minutes of sex material. It was just a fun place to explore.”

Opening Friday, “Fifty Shades of Black” follows the rough formula of earlier Wayans parody films like “Scary Movie,” “Dance Flick” and “A Haunted House,” taking ostensibly serious material and heightening its inherent sillier aspects, then putting it into a blender with over-the-top slapstick, topical pop culture gags and unexpected cameos. (Suffice to say, after this film fans of the “The Brady Bunch” may never look at Florence Henderson quite the same way again.)

Wayans, who steps into the pervy businessman role opposite Kali Hawk, is clearly hoping to draft off the massive success of the “Fifty Shades of Grey” book and last year’s big-screen adaptation, which earned more than $500 million at the global box office. But the ultimate aim, he said, was to make a film that would work whether you love “Fifty Shades of Grey,” hate it or are indifferent to it.

The spoof movie has long occupied its own unique place in the cinematic ecosystem, a kind of comedic remora that rides along the back of the leviathan blockbusters. Though spoofs are not the kind of movies that tend to get showered with critical plaudits and awards, writer-director Jim Abrahams — who, along with Jerry and David Zucker, co-wrote such exemplars of the genre as “Airplane!” and “The Naked Gun” — believes they have a valuable, court jester-like role to play within Hollywood.

“The ultimate target of spoof is to allow us all to laugh at things that we tend to take seriously,” Abrahams said. “I think it’s a very healthy kind of humor when done right.” He laughed. “It’s always tough to have these discussions. The whole idea is not to take things seriously — and here we are taking it seriously.”

Spoof movies have existed for almost as long as there have been movies to spoof — in the silent era, Stan Laurel was cracking up audiences with parodies like “Mud and Sand” and “Dr. Pyckle and Mr. Pride.” But Wayans — along with Jason Friedberg and Aaron Seltzer, who have codirected such spoof films as “Date Movie,” “Meet the Spartans” and “The Starving Games” — grew up in what was, in retrospect, their golden age.

The ‘70s and ‘80s saw an explosion of spoof movies and genre send-ups, from “The Kentucky Fried Movie” to “Monty Python and the Holy Grail” to Mel Brooks classics like “Blazing Saddles” and “Young Frankenstein,” many of which were embraced not just by audiences but by critics as well.

“My brothers took me to ‘Airplane!’ when I was like 8,” said Wayans, whose first big-screen appearance was in his older brother Keenen Ivory Wayans’ 1988 blaxploitation spoof “I’m Gonna Git You Sucka.” “It stuck in my head: ‘These are the kinds of movies I like going to: They make statements, but they’re subtle and yet loud. It’s just silly and broad and physical.’”

“Right now parody is a struggle,” said Wayans, who has also appeared in many nonspoof films, including “Requiem for a Dream,” “White Chicks” and “The Heat.” “A lot of parody can come out that spoils the taste of the audience. It’s the same with stand-up: Everybody is going to have some version of the joke. There’s no guarantee. It’s all about who’s telling the joke and do you like what they’re saying.”

That said, spoof movies continue to be a viable proposition on the big screen — provided the budgets are kept in check. “If you spend a ton of money on a movie like this, you’re going to lose your shirt,” said Paul Dergarabedian, senior media analyst at the box-office tracking firm Rentrak. “Nobody is looking for Academy Award nominations out of any of these movies. But they’re obviously making enough of a profit to make it worthwhile. At the end of the day, scoff all you want at these movies, but if the film makes money — if it ends up making a $10 or $20 million profit — then the filmmakers are laughing all the way to the bank.”

“Fifty Shades of Black” was financed by IM Global at a production cost of less than $5 million and is being distributed by Open Road Films, which also released Wayans’ 2013 found-footage-horror parody “A Haunted House” and its 2014 sequel. Open Road CEO Tom Ortenberg is confident that, between its theatrical release and eventual home-video afterlife, where parody films tend to do well, the film will find a sizable audience.

“Every film needs to have an economic model that supports it — it doesn’t matter whether it’s a raunchy R-rated comedy, a historical drama, a superhero film,” Ortenberg said. “‘Fifty Shades’ is hilarious and stands on its own as an outrageous comedy. There was a strong feeling from the beginning that the film needed not only to be as big but as broad as possible, and I think they really achieved it. I think it’s the best version of this film they could possibly have made.”

The enormous popularity of “Fifty Shades” clearly provides a certain built-in level of insurance. Abrahams pointed to the box-office failure of the 1984 Zucker-Abrahams-Zucker film “Top Secret!” — an odd hybrid of an Elvis Presley movie parody and a World War II film — as an illustration of the need for that kind of solid foundation when embarking on a spoof.

“‘Top Secret!’ launched off of a genre that didn’t exist — there were no World War II Elvis movies,” he said. “If you look at the parodies that have done best — ‘Young Frankenstein’ or ‘Airplane!’ or ‘Scary Movie’ — they all launch off of very firm grounding.”

But even with that firm grounding, there is one particular “Fifty Shades” audience member who may go into the movie with a somewhat less amused attitude: the book’s author.

Wayans, who plans to take a break from parody next to explore other comedic avenues, says he met James recently at the Chateau Marmont. Over drinks, he tried to ease any worries she might have about “Fifty Shades of Black.”

“She was like, ‘Am I going to be upset at your movie?’” Wayans said. “I said, ‘Look, mockery is the best form of flattery.’”