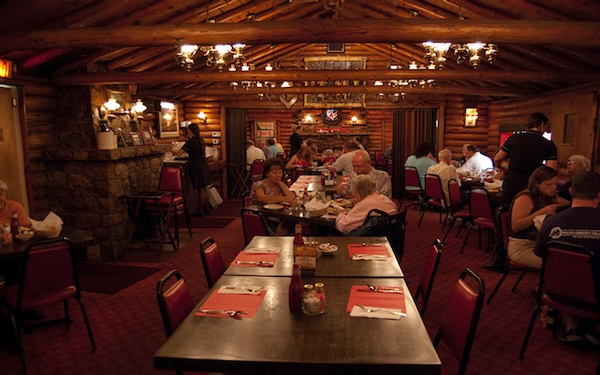 A still from "Old Fashioned." (Handout from oldfashionedthemovie.com)

CHICAGO — When Wisconsin native Holly De Ruyter came to Chicago for college, she was bewildered to find there were no supper clubs.

Few outside the Midwest even know the term. As a documentary filmmaker, she toyed with the idea of making a movie about the supper club phenomenon (homey, family-owned eateries specializing in heavy food and lots of brandy old fashioneds, which lubricate the companionable, “Cheers”-like ambience) but De Ruyter did not have a car. And the only way to get to Wisconsin’s supper clubs — most of them tucked away on back roads in sparsely populated areas — is to drive. No car, no supper clubs.

“When I graduated from college,” she told me, “I started dating my now-husband, and he had a car!” She laughed. “He has a lot of great qualities, but he also had a car.”

That car would make possible the cinematic restaurant-hopping for her film “Old Fashioned: The Story of the Wisconsin Supper Club.”

This is not the first film to cover the topic in recent years. Wisconsin Public Television produced the half-hour “Supper Clubs 101,” and there is also Ron Faiola’s similarly titled doc “Wisconsin Supper Clubs: An Old Fashioned Experience,” which came out in 2011.

That’s a lot of films — not to mention the handful of books published — about such a niche subject. (Although there are supper clubs dotted across the upper Midwest, they are a true staple in Wisconsin.) “I started making my film before any other documentaries about supper clubs came out,” De Ruyter said, but stressed that her film is different because it delves into the history, including this tidbit:

The rural setting for most of these supper clubs? That stems from their origins as roadhouses during Prohibition. According to the film, many in Wisconsin were defying the ban on alcohol but not openly. Hence those out-of-the-way locales.

After Prohibition was repealed, establishments that were among the first to receive liquor licenses were those that served food, which is why many of those roadhouses transformed into what we now know as supper clubs.

And they were relatively easy to get to if you had a car because, even in the days before the interstate highway system, Wisconsin had an extensive network of paved country roads that were built to ensure the state’s dairy farmers were able to transport their product to market in any weather.

De Ruyter ventured into restaurants with names like Smoky’s Club, The Stagecoach Inn, The Butterfly Club, The Duck Inn, HobNob and The Fireside. “So many people I encountered along the way were like, ‘Yes, supper clubs! Why do we do this? I have so many questions for you to answer.’ And I was like, ‘That’s what I’m working on!’”

Here’s another piece of social history the film touches on: Prior to Prohibition, women looking to order a drink in public were typically met with nasty glances or worse. Supper clubs were among the first places where women could comfortably order a cocktail. (There is no overstating just how important the bar is to the supper club experience.)

What the film lacks are characters you can latch on to. At times you wish De Ruyter’s camera would simply follow a patron or restaurant owner or two for a while, quietly observing what makes these people tick. That’s how you capture the texture of a place and the daily lives of its people. (The 2012 documentary “Spinning Plates,” for example, offers a rich portrait of people who work behind kitchen doors at restaurants across America.)

As for supper clubs, the food on offer may lack in greenery, but it’s all organic and locally sourced. Nothing is prepackaged or heated up in the microwave. And the we’re-all-friends ambience is key to these establishments’ appeal. The closest equivalent in Chicago is the corner tavern, itself an endangered species.

“Living in Chicago I realized that feeling of community is something I want more of,” De Ruyter said. “I live in Edgewater, and there are some nice neighborhood bars here, and I kind of want to start being a regular at a bar because I really want that sense of community. But then, at the same time, I don’t know how that would work with my budget or my liver.”