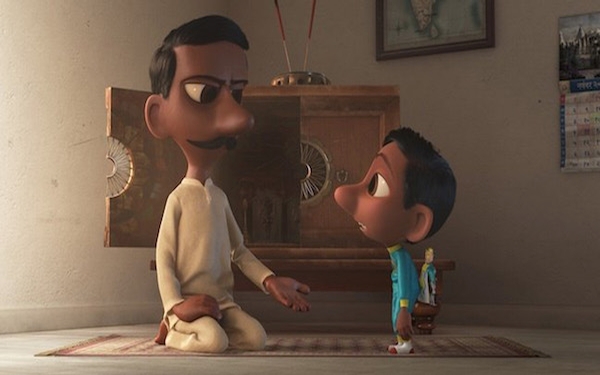 An examination of the Oscars’ often overlooked short-film category.

Place your Oscar-pool bets on “World of Tomorrow” (4 stars), a chilling yet somehow tender exploration of a future populated with human clones. Emily Clone, speaking across the centuries in a robotic British cadence, explains to 4-year-old Emily Prime, her “original,” how the new order works — a litany of sad romances, stolen memories and class warfare. This audaciously imaginative tale, told with simple stick figures and dazzling colors, will bring out your protective instinct for little Emily, and the human race.

Close behind is the heartbreaking “Bear Story” (3.5 stars) from Chilean filmmaker Gabriel Osorio, in which a forlorn bear creates elaborate mechanical toys that re-create the happy life he shared with his wife and son before his forced servitude as a circus performer. The exquisite dioramas have a Wes Anderson-like whimsy, but there’s no mistaking the allegory to Augusto Pinochet’s reign of terror.

Two friends, close as brothers, train for a chance to travel into space in “We Can’t Live Without Cosmos” (3 stars). After rigorous testing, they rise to the top of the list — but only one can go, with traumatic consequences for the cosmonaut left behind. The melancholy story, underpinned with a soundtrack of Russian classical masterpieces, transcends the “Beavis and Butt-head”-style animation.

It wouldn’t be an animation contest without Pixar. In “Sanjay’s Super Team” (2.5 stars), a young Indian boy obsessed with superheroes watches his favorite cartoon and plays noisily with his prized action figure while his father seeks quiet time to pray. A fanciful daydream in which Hindu gods become superheroes themselves turns the boy’s head around. It has all the Pixar production values, but the sweet conclusion feels clichéd.

Keep the kids away from “Prologue” (1 star), in which delicately rendered pencil drawings of flowers and butterflies morph into the faces of angry warriors who lunge and attack one another’s nether regions. The frenzied, blood-spurting action resembles a life-drawing class run amok.

In the category of “most likely to bring you to tears,” we have the supremely touching “Stutterer” (3.5 stars). A handsome man (Matthew Needham) with the titular affliction spends his days observing the world in eloquent interior monologues and whiles away his lonely nights online, communicating with a young woman in the only way he can. Or is it?

The Kosovo war of the late 1990s is the backdrop for the devastating “Shok” (3.5 stars), based on true events. Two Albanian boys get caught up in a dangerous black market game with occupying Serbian soldiers that ultimately costs them everything they hold dear. Lum Veseli is particularly affecting as the young ringleader.

What appears to be a divorced dad’s happy outing with his 8-year-old daughter (toy store, McDonald’s, bumper cars) is revealed with mounting dread to be the beginnings of a desperate plan, even as he reassures her that “Everything Will Be Okay” (3.5 stars). The poignant Julia Pointner is the increasingly bewildered girl, and Simon Schwarz evokes sympathy as a father at the end of his rope.

For Feda Ahmadi, “Day One” (3 stars) on the job as an interpreter with the U.S. Army in Afghanistan includes life and death — but not in the way she might have expected — when she is drawn into a harrowing childbirth drama that is by turns tragic and uplifting. Layla Alizada is luminous as the woman who finds she has deeper reserves than she knew.

An Orthodox Jewish man ferrying his wife and cantankerous mother strays into Arab territory in “Ave Maria” (3 stars), accidentally crashing into a statue of the Blessed Virgin outside a convent whose nuns observe a vow of silence. The comical misunderstandings that arise from the two parties’ many differences (and ultimately, their similarities) are gentle but pointed.