Man buns: Love them or loathe them, the trend’s going strong 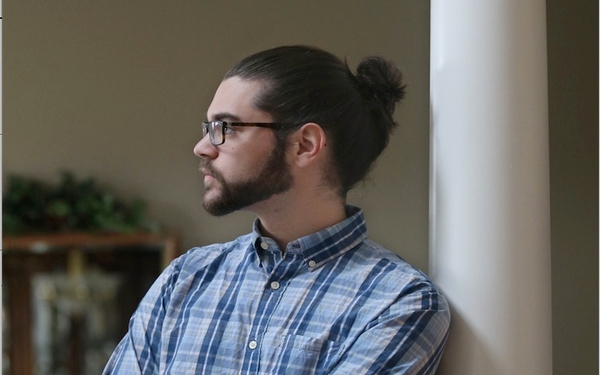 Josh Froats, 19, a sophomore chemical engineering major at Ohio State University, with his hair in a bun at his parents home. (Phil Masturzo/Akron)

AKRON, Ohio — When Justin Bieber was photographed wearing a man bun to a fundraising gala earlier this month, the Twittersphere lit up.

Some Bieber watchers welcomed the new ‘do. Some scorned it. Cinnabon saw it as an opportunity.

“Hey @JustinBieber — can we get our MiniBon back?” the sweet roll maker tweeted.

So it is with man buns. People either love them, hate them or mock them.

Men have been putting their long hair up in buns at least since Buddha’s time, but the style has come on strong in the last couple of years, fueled by such celebrity bunsters as Jared Leto, Joaquin Phoenix and Leonardo DiCaprio.

Even the American Dialect Society has recognized the trend. “Manbun” — one word — was one of its nominees for 2015 word of the year.

A man bun is usually just hair that’s pulled up into a knot and worn at the crown, but there are variations. Some guys wear their hair cropped short on the sides, with the longer hair on top pulled into a bun. Some braid their hair before gathering it. Some count itty-bitty ponytails as man buns, but that’s a matter of debate.

Ohio State University sophomore Josh Froats jumped on the bunwagon several months ago. For him, it’s all about style.

Froats’ man bun stands in stark contrast to the short hair he wore all through Highland High School. But now it’s part of his identity, much to his amusement.

“Just the ridiculous amount of attention my hair gets on a regular basis is kind of absurd,” said Froats, who began growing his hair long a little more than a year ago because he couldn’t get a haircut appointment during a visit home to Sharon Township. He started styling it in a bun late last summer, once it got long enough.

No one ever mentioned his hair when it was short, he said. But now even strangers will compliment him on it.

He even got some pushback from friends when he floated the idea of cutting his hair about a month ago.

“I had a lot of people saying they were not happy with that,” he said. It’s your look, they told him.

Not everyone is a man bun fan, of course. In fact, some of the biggest antagonists are female, according to data from men’s grooming company West Coast Shaving. In a survey of 1,000 U.S. women, nearly 70 percent said they either disliked or flat-out hated man buns. Some 58 percent said they wouldn’t date a man who had one.

Why? Too feminine, was the most frequent response.

Men’s lifestyle blogger Dominic Bonvissuto doesn’t count himself among the man bun’s admirers, either. “I do kind of sneer at it,” he admitted, and he suspects the trend will prove short-lived.

Nevertheless, he applauds what the man bun represents: men’s increasing interest in their appearance and their willingness to break out of molds.

The man bun is a rare example of men wearing something that’s very different, said Bonvissuto, who writes the blog Jeans & Ties. In the last seven years or so, guys “have really started to take ownership of their appearance,” and with that comes experimentation, he said.

Still, Bonvissuto believes the man bun isn’t for everyone.

“For me, it would typically be a younger guy’s deal,” maybe a style for someone just out of college working in a creative field, he said. “It would feel weird in a professional atmosphere.”

A man bun also requires long hair, but there are ways around that. Clip-on man buns are available for those without the lock length to support the real thing.

Fashion retailer ASOS Australia tweeted a picture of a clip-on bun as an April Fools’ joke last year, but the hairpiece is a joke no more. Manbun.com sells faux buns for $16.95 in brown, black and blond.

Man buns — the real kind, that is — do have some practical applications, Cuyahoga Falls, Ohio, hair stylist Monique Palmison said. Athletes and other active men often wear them to get their hair off their necks and out of the way. Some restaurant workers wear them for sanitation purposes.

Palmison admits to being “a sucker for men with long hair,” so she doesn’t mind the style if the wearer has a full head of hair and is well-groomed. She’s not so crazy about men with buns who shave the sides of their heads, and what she really can’t stand is guys who don’t wash, brush or comb their hair first.

“I’m sure half of them roll out of bed in the morning and throw it up” into a bun, she said.

If they pull the topknot too tight, bun wearers may be in for trouble. Man buns have been found to cause bald spots, the news site Mic reported.

Styles that pull on the hair follicles over long periods of time can cause traction alopecia, a condition that kills the follicles and causes baldness around the forehead and temples. Man buns aren’t the only cause, of course, but they’re probably one of the reasons the condition is becoming more common, according to the dermatologist Mic interviewed.

Despite the drawbacks, bun wearer Froats thinks he’ll keep his for a while.

Not only does his man bun get him noticed, but the style is comfortable, he said. It also keeps his hair out of his face. Besides, he knows this is a time in his life when he can get away with a little nonconformity.