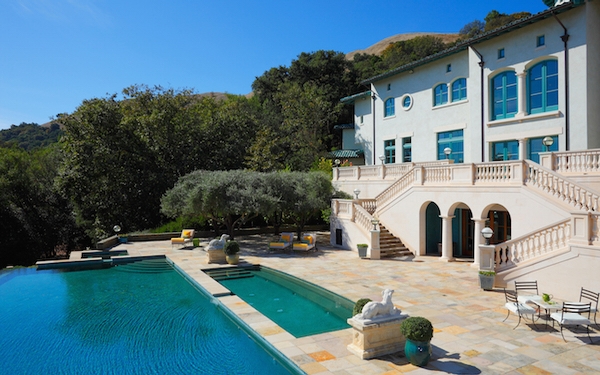 LOS ANGELES — Four years after it first listed for sale, the Napa estate of late actor and comedian Robin Williams has sold for $18.1 million in an all-cash deal.

The 640-acre property, called Villa Sorriso for “villa of smiles,” returned to market two years ago for $29.9 million and was more recently listed at $22.9 million.

The sprawling estate, built for the comic more than a decade ago, centers on a limestone-clad mansion of nearly 20,000 square feet.

Features include a two-story entry with a rotunda and bell tower, a billiards room, an oak-paneled library, a 12-seat home theater and three safe rooms. An elevator services each of the home’s three floors.

In all, there are five bedrooms and 10 bathrooms in the main house. A caretaker’s house adds four bedrooms.

Elsewhere on the property are more than 18 acres of producing vineyards, hiking and horse riding trails, mature olive trees and a spring-fed pond. A nine-stall horse barn is among the equestrian facilities.

SWINGING FOR A HOME SALE

Retired Major League Baseball player Mike Lieberthal has put his home field in the North Ranch area of Westlake Village on the market for about $5 million.

The 9-plus-acre spread includes a 9,627-square-foot Mediterranean villa, a custom swimming pool and spa, a pool house, a lighted basketball court and a putting green.

Inside, the two-story floor plan features a foyer with a chandelier, a custom home theater, a wine closet and an oak-walled game room with a row of flat-screen TVs, a billiards table and a wet bar.

Other living areas include a gym, an office/library, seven bedrooms and 6.5 bathrooms. A wide center island, a country-style range and tray ceilings highlight the cook’s kitchen.

Fireplaces are found in the living and game rooms, breakfast area and master bedroom.

French doors open to a covered patio overlooking the park-like setting. A porte-cochere, a motor court and a four-car garage sit at the entrance to the home.

Lieberthal bought the property in 1999 for $3.5 million. The house was on the market for as much as $6.5 million last year.

Lieberthal, 44, starred at Westlake High School and was later taken third overall by the Philadelphia Phillies in the 1990 amateur draft.

The catcher played 14 seasons in the majors for the Phillies and Los Angeles Dodgers, making two all-star teams. He retired in 2008.

Adam Carolla will have to find a new bar to belly up to in the coming year.

The comedian and his wife, Lynette, have sold their home in Hollywood Hills, which features a vintage pub with its own entrance, among other things, for about $4.8 million.

The Spanish Revival-style villa, called Vista del Lago, sits behind a double-gated entry and has a circular driveway.

Beyond a hand-carved front door, the house opens to a two-story entry with a detailed ceiling, Saltillo-tile floors and a wrought iron staircase embellished in colorful tile. A dining room with cathedral ceilings and a step-down living room with dark wood floors are in keeping with the original 1920s style.

Other areas include a retro-inspired kitchen with a center island, a second living room, a gym, five bedrooms and six bathrooms. A private balcony and free-standing brick fireplace highlight the master suite.

An inner courtyard with alfresco dining and a tiled fountain sits between two wings of the home and is accessed by arched French doors. In the pub, porthole windows look onto the swimming pool.

A massive garage with a lift and parking for up to 10 cars is also within the more than half-acre grounds.

He has hosted “The Adam Carolla Show,” a daily podcast, since 2009.

HIS NEW HOME IS A KNOCKOUT

Former professional boxer Mike Tyson has added a new trophy to his collection: a 10,401-square-foot mansion in the Las Vegas suburbs.

Tyson recently paid $2.5 million for an Italian-style home in gated Seven Hills, a golf course community in Henderson, Nev., where he and his wife have lived since 2008, according to the Las Vegas Review-Journal.

The two-story house, built in 2001, opens in grand fashion to a double-height foyer with marble flooring and a sweeping wrought iron staircase.

Among common areas is a living room with vaulted ceilings and walls of windows, a great room, an office and a family room with a moon-shaped wet bar. A center-island kitchen features a second wet bar and wine closet.

A total of six bedrooms and 6.5 bathrooms include a master suite with a step-up soaking tub, a fireplace and a private balcony. There are four fireplaces in all.

Tyson, 49, recorded 50 wins, including 44 knockouts, in 58 career bouts. He holds the record as the youngest boxer to become the undisputed world heavyweight champion.

More recently, he has appeared as himself in the film “The Hangover” (2009) and the Adult Swim series “Mike Tyson Mysteries” (2014 to present).

Scottish DJ and record producer Adam Wiles, who goes by the stage name Calvin Harris, has put his sleek home in Hollywood Hills West up for sale at $9,995,000.

Set above the Sunset Strip, the two-story contemporary-style house is accessed by a double-gated driveway.

Fronting a 10-car motor court, the renovated 1950s home has a row of large circular windows along the facade.

Inside, the open floor plan includes formal living and dining rooms, a chef’s kitchen with a breakfast bar, a home theater and a family room with a wet bar. Dark wood floors, beamed ceilings and a glass-and-steel staircase lend visual contrast to more than 4,100 square feet of white-walled space.

The second-story master suite has a fireplace, a sitting area and a wall of floor-to-ceiling glass that overlooks the common rooms. The home, with a total of four bedrooms and seven bathrooms, includes a detached guesthouse with a separate entrance.

A swimming pool and spa, an outdoor kitchen and a lounge make up the grounds.

The DJ bought the house three years ago for $7 million, records show.

Harris, 31, won a Grammy in 2013 for short-form music video for the song “We Found Love” featuring Rihanna. He has released four studio albums, including the chart-topping “18 Months” in 2012.