Controlling the Famous: Taking on Hollywood 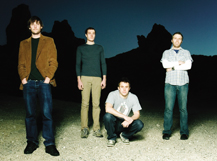 Chatting with members of Controlling the Famous is a lot like kicking it with some chill friends you've known forever. The down-to-earth Southern California boys aren't as complicated as some bands can be. They are just a group of guys making music because they want to, no ulterior motives.

With Max Hellmann and John Collins on guitar and vocals, Brendan Hughes taking over the bass and Mike Schneider on drums, these guys are doing just what they set out to do. Not just making music, but making good music.

The undeniable fan base Controlling has already attained with its self-released EP, Two Birds Versus One Stone, is as diversified and dynamic as its members could have hoped for. “People are so obsessed with placing music in genres these days,” says Hellman. “I think we appeal to a whole bunch of different people so at the shows you'll see the normal looking guy that probably sits on the computer all day and you'll also see the hip indie kid. It's not like there's one certain type of person who is at the show.”

The band's debut full-length album, Automatic City, is pumped full of the groove-driven rock melodies showcased on Two Birds. In fact, two of the songs from the EP were actually re-recorded for the new album.

When it comes to writing songs the members of Controlling don't rely on anyone but themselves and everyone in the group participates in the creative process of constructing a song the old fashioned way – rocking it out until it sounds good.

“Everybody writes together, we don't really come into practice with anything, we just write it out as we go along,” explains Hellmann.

Collins adds that while jamming it out together in the recording studio they simply try to make every song have a “live” show feel so fans listening to the band's music in their cars could get the sensation of being at a show.

In spite of all the excitement of creating an album there are drawbacks to being a musician as the group has discovered. Hellmann explains, “When you're in a band it takes a lot of time away from everything else so everything that's going on other than music gets put on the back burner. It's hard to balance creating the music and actually keeping a regular life.”

The challenges, however, are a small price to pay for doing what they love everyday. Insistent on not being a remake of or replacement for any other band, Controlling has managed to create a unique post-rock sound that it doesn't want compared to anybody else. And it doesn't play music to relay messages to its audiences. The members don't want to tell anybody what to think of them or their music.

“We don't try to force any message on people,” adds Hellmann. “We just like music as a creative process and we like to share what we do with people. We like it to be kind of mysterious so people take their own ideas out of what the music means,” he jokes.

Waiting for the release of Automatic City may have the members a little restless, but they're not too worried. Hellmann reveals, “It's definitely getting really exciting to have something that's going to be in stores and have people who believe in you such as the Militia Group. Anything we've done before [has] been self released but with people behind us it's a little more secure.

“I'm nervous but we play music to play for ourselves. We're doing it for ourselves so whatever happens, happens,” he resolves.

Hellmann says for now the band will concentrate on taking baby steps to get where they eventually want to be by making each fan one by one. And in 10 years Collins agrees that they hope to still be making music on their own terms.

Automatic City will be available May 16. Controlling the Famous will perform May 27 at the Knitting Factory, in Hollywood. For more information, visit www.controllingthefamous.com .