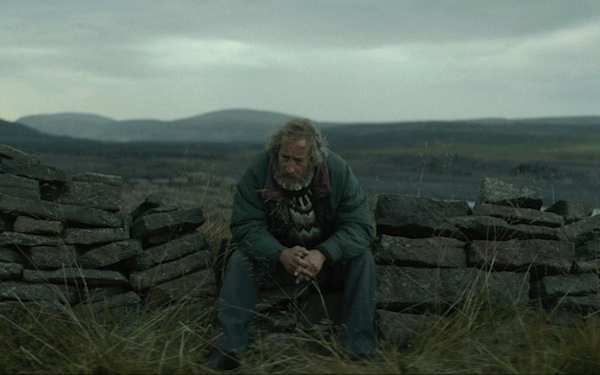 Somewhere deep in the chilled waters where the Atlantic and the Arctic meet, lies an island where the bond between man and his flock is held in distinct respect. Due to its rather bizarre weather patterns and it’s particular means of isolation, many that dwell in Iceland turn to its livestock as not only their livelihood, but also as their source of companionship. And thus, we get Rams, a manifestation of that precise idea of how tending to land and animal becomes not only a thing of financial support, but emotional necessity.

If that all sounds good and dull to you, well think again. Writer-director Grímur Hákonarson, who took home the Un Certain Regard Award at Cannes last year, approached his narrative with careful consideration, where man, beast, and nation all coalesce into a simple, yet wholly offbeat tale of two estranged brothers who must turn to each other if they want to save their prized breed of ram from an incurable disease that sweeps their quaint valley. While the consequences are dramatic—a mandatory slaughter of all sheep in neighboring farmlands—finding that angle of intrigue wasn’t so simple.

Hákonarson explains, “It took me some time to decide which story I would tell. The story of the brothers who haven’t spoken in forty years is based on real life, but I also thought that story was lacking the national character of Iceland. You know, it’s an island in the middle of the ocean, and you should feel the stress coming from above. So I thought it had to be a simple story, but also symbolic and have this co-human element. It’s a story everyone in the world can relate to. It has its personal aspect but also somewhat of a political aspect.”

It’s in that clash between the outer and inner worlds where Rams finds it’s footing as not only a quiet drama that you might expect, but also a wryly humorous and often exceedingly tense account of two old gruffs reluctantly relying on each other to keep their heritage alive. This particular combination of genres cast against the wide, rolling Icelandic landscape becomes something inescapably and poignantly singular.

“It’s very hard to define the genre of Rams. It has comedy, drama, and even some thriller elements. Some people describe it as an agricultural film. I quite like that. But about the humor, I think the humor of Rams is the epitome of dry Scandinavian humor. We live in a cold and dark country. We have very dark winters. People get depressed. People get affected by the seasonal circumstances and so, it affects our humor and how we look at life,” says Hákonarson.

Of course, nailing that smorgasbord of tonal shifts falls heavily on the two actors that Rams follows. Despite being well past their youth and even middle age, Gummi (Sigorour Sigurjónsson) and Kiddi (Theodór Júlíusson) still exude a sense of immaturity that quickly becomes engrained in the story’s wit. Whether it’s communicating solely through messages via their trusty dog, or passing out drunk on each other’s doorsteps, our two heroes embrace a refreshing levity in their rather somber journey. While their background in theater and comedy surely was the first step in the right direction, it was Hákonarson’s precise direction that got his leading lads to traipse the fine lines of comedy and drama.

“I told them what I wanted from every scene, what was the meaning of every scene. If it didn’t happen right away, then I’d interfere,” Hákonarson explains. “The main character [Gummi], he has a lot of beard, and has to act with his eyes a lot. So I talked to him a lot about his eyes, and how he should use them, whether to look up, or down, or just blink. Sometimes it was really specific. I’m a control freak. I keep on working until I’m satisfied and get the right moment.”

As it happens, those right moments come in abundance, especially when set against cinematographer Sturla Brandth Grøvlen’s (Victoria, 2015) equally lush and stark depiction of this remote Icelandic farmland. Wide angles and muted colors all emphasize the quality of the land’s unforgiving character. Coming from two different schools of thought on many aspects of shooting, the artistic partnership between director and cinematographer took a great deal of preparation.

Hákonarson remembers, “I wanted to emphasize the loneliness and isolation, as well as the connection between nature and the brothers. There are a lot of wide frames, and scenic shots. Our intention was to make it almost like a documentary watching real people. We tried to use few angles as we could, tried to limit ourselves, shoot one scene in one take. [Grøvlen’s] a Norwegian cinematographer, and studied in Denmark. He’s much more used to shooting handheld, but I’m more old school with that kind of thing and want static wide shots. So we took more time finding the right balance.”

When all is said and done, and when we can finally take a step back to take in Rams as a full tableau, we see the varied and often stormy coupling of personalities that roam the land and tend the soil. It becomes apparent that, despite woeful tidings, the reflection of pride and kinship is strong enough to thwart even the longest of feuds, and Hákonarson and his team are there to remind you how, through a simultaneously radiant, quiet, and quirky tale of two men’s sheep.

RAMS opens at the Laemmle Royal on Friday, February 5th. For more information and to purchase tickets, visit the RAMS website.

Interviews
'Crazy Rich Asians' made Henry Golding a star. Now he's showing Hollywood everything he can do
569 views

Interviews
Mary McNamara: After losing a child, 'Pieces of a Woman' filmmakers channeled their grief into art
601 views