Pride and Prejudice and Zombies: Jane Austen would only think it's kind of funny 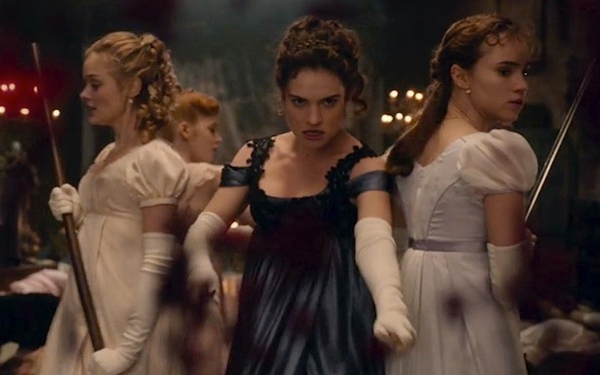 Alright, people. Here we have a unique specimen: Pride and Prejudice and Zombies. Not is this just an adaptation, but it’s also an adaptation of an adaptation. Or perhaps more accurately it’s an adaptation of a remix. Whatever you want to call it, there are many source materials being borrowed from and many places to start criticizing. Whether you’re a harrowing follower of Ms. Jane Austen’s work, or if you first met Ms. Bennet with a sword in a zombie’s gut in Seth Grahame-Smiths 2009 parody novel, you probably have some hardy opinions on the matter.

As for me, I count myself rather unaffected by any sort of bias because I have not subscribed to any sort of Jane Austen Book Club besides having read a couple of her works early in high school when I couldn’t be paid to care, nor did I get the chance to read the admittedly enticing sound of Grahame-Smith’s take. Maybe that makes me a fool, but at least I’m an untethered fool who wanted to be honest with my readers who may hold me to higher standards. And so, with that disclaimer in place, let’s talk dirt.

Okay, so Burr Steers as writer-director was, at first glance, an intriguing choice. His work spans from the super-mega indie world of Igby Goes Down (2002) all the way to the super-glossy mainstream land of 17 Again (2009). Now, with Pride and Prejudice and Zombies, his first feature in six years, we get to see how his wide array of work infiltrates one of the most classic romances turned on its head by zombies.

If there’s one word that comes to mind to encapsulate Steers’ take in its entirety it's cheeky, and that comes in wide variety of good and bad. As you might expect, every angle of exploring the Austen world is approached with a certain degree of sass, assuming that most of the audience knows at least the foundations of the tale to which Steers and his cast can toy with to create the most absurd situations. Having Mr. Darcy (Sam Riley, Control) ride up to a barricaded estate looking for a zombie who has infiltrated the niceties of a chess party is quickly amusing. And then it keeps coming, in various forms with various forms of success.

The leaders of this particularly overt cheekiness are of course the leading ladies. Lily James (Cinderella) as Elizabeth Bennet, Bella Heathcote (Dark Shadows) as Jane Bennet, as well as the rest of the Bennet sisters quickly set the stage for what is to be an overtly sexualized account of women finding their voice and sticking to their guns in the 1800s. What I really mean is that hoisted bosoms are everywhere you look, and is thus supposed to make the whole zombie-slaying aspect that much funnier. And, you know, sometimes it does. And others, it’s just really, for lack of a better term, overkill.

This isn’t to say that the ladies don’t bring a lot of delightful and bright energy to the spinoffs of their more stuffy counterparts. James as the sword-instead-of-pen wielding Elizabeth proves to have a natural dry sensibility to her humor, as well as the ability to kick some serious ass. And if there’s one thing that Steers can be applauded for in Pride and Prejudice and Zombies, is in its unabashed depiction of ass-kicking, especially amongst the ladies.

From the Bennet sisers training in the basement of their manor, to Lena Heady (“Game of Thrones”) as the famed zombie-slayer throughout the land, Lady Catherine de Bourgh, we get to see our usually docile, gentle girls pull off some totally hard-hitting moves that should satisfy all the action fans out there.

And then there’s the fellas, who are a substantially less intriguing bunch in this particular world. Sam Riley as Mr. Darcy plays up the stick-up-his-ass persona with good enough humor, but ultimately gets outshone by James’ saucy Elizabeth. The same goes for Jack Huston (American Hustle) as George Wickham. As the baddie he only brings a marginal dose of malice that leaves something to be desired. Yes, an army of zombies is a lot of bad in itself, but Wickham as the film’s main villain is rather underwhelming.

The one major exception, however, is Matt Smith (“Dr. Who”) as the unabashedly awkward, wife-seeking missle Mr. Collins. Not only does he bring that same wildly uncomfortable sensibility as the original Collins, but Smith also reinvents the character with his own strikingly unappealing appeal. In the end, it becomes readily clear that Smith steals the laughs of the entire affair, which may be fine for some viewers, but perhaps more unsatisfying for people with wider expectations.

So, what about the whole zombie aspect? Is it scary, you ask? Actually, there are some unexpectedly jolting moments, as well as luring creepiness that added proper horror elements to the whole genre mashup. While I would say it could have gone a wee bit further, considering the task at hand, I believe Steers did a fine job injecting some yikes moments throughout the grand tale of romance.

Which is basically my consensus of the whole movie. There was a good amount of laughs, a good amount of screams, and a good amount of sweeping classical imagery, and most of it was pretty enjoyable to watch. But by the end, which is also dragged out in a bit of a lengthy manner, you are ready to move on with your life. Sorry Ms. Austen.