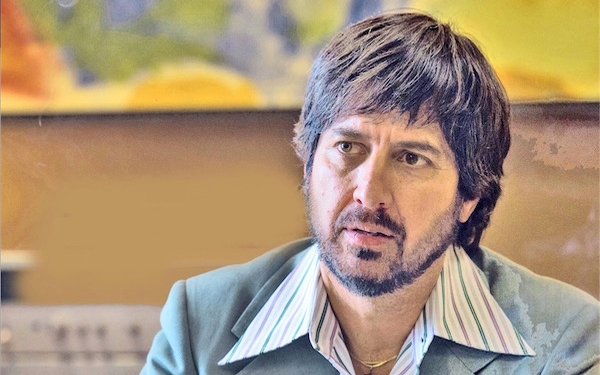 Ray Romano plays promotion manager and partner in a struggling record company in HBO's tale of the music industry of the '70s, "Vinyl," which begins airing on Sunday. (HBO)

PASADENA, Calif. — Not everybody loves Raymond. In fact, not everybody has even heard of Ray Romano, though his popular sitcom, “Everybody Loves Raymond,” ran for nine years and turned Romano into a comic star.

One person that had never heard of him was Martin Scorsese. The film director was casting HBO’s explosive saga about the sex, drugs, and rock and roll era of the music industry of the ‘70s. And when Romano’s agent read “Vinyl,” which premieres Sunday, he urged his client to submit an audition tape.

“So I went to my closet and said, ‘Do I have anything that looks ‘70s-ish? And sure enough, there was a shirt that looked a little bit ‘Miami Vice.’ And luckily my hair was a little bit long. I came out of the shower and just let the bangs fall down. And did this scene with my buddy, we videotaped,” recalls Romano in a hotel room here.

They sent Scorsese’s casting partner the tape. She reported back that the director was familiar with the character in “Vinyl,” but had never heard of Romano.

“He’s not a sitcom fan,” shrugs Romano, “he’s a movie film genius and had never met, heard of me, or seen me — which ended up being a blessing because he didn’t have a preconceived idea of me. There was no baggage. They said I’m in the running, and about three or four weeks later they said, ‘He’s in the running.’

“And one day my agent and business manager both called on a conference call. I thought they weren’t both going to call me for bad news. They just told me, ‘Congratulations, you got the part.’

“I said, ‘Now the fear begins. Now I have to meet Martin Scorsese and actually act for him.’ Then I got excited, nervous. My agent told me to call him and have a conversation with him, and all day I was anxiety ridden. But he was great. He was easy, he was laughing, he was funny.”

“As negative as I am, as self-deprecating as I am about myself, I’m really good at doing that. Acting is still a learning process. It’s slow. You come from a sitcom, nobody wants to see you do anything dramatic. So you make your own show. You make ‘Men of a Certain Age,’ and do a little comedy and a little drama, and some people see it. Then you do ‘Parenthood,’ and some people see that. Then you get lucky to be cast in this thing.”

Romano thinks that most standup comedians share a common denominator, “They need what they get onstage; something that was missing from them,” he says.

“I, I don’t want to criticize or blame anyone, but my father happened to be a guy who grew up without a father of his own. He had a hard time expressing himself. He was very undemonstrative. My one joke is if my father hugged me once I’d be an accountant right now. I wouldn’t have needed what I did.”

Acting comforts him in a different way, he says. “It’s hard for me to express myself in my real life, that my father passed down to me, unfortunately. So it’s nice to put on a mask and a costume and be able to do it as somebody else. You don’t mind the attention. It’s exciting. It’s exciting to get into someone else’s skin and transform yourself.”

It was a heady ride for Romano when he helmed the sitcom. But when “Everybody Loves Raymond” ended, Romano tumbled into a tailspin.

“It was sad at first, then exciting because it was nine years of being in this bubble and working with all my energy. And then it was like an emotional crash.”

The first year of the show, he didn’t move from his native New York. The second year the family relocated to L.A. Romano had three small children at the time.

“The kids grew up, we had another baby, but the whole time I’m 24/7 consumed by the show. And then it ends overnight, and it’s like you come out of a submarine. And it’s literally almost like, ‘I live HERE now?’ ‘My kids are grown?’ ‘I’m not in New York anymore?’ It took a few months until the void overtook me. And I had trouble, a lot of emotional struggles until the next thing comes along.”

Romano had been in therapy most of his life and was running out of things to say. “But when the show was ending my therapist said, ‘Do you want to start coming twice a week?’ I was like, ‘I don’t even want to come once a week.’ And sure enough, after three months I was going twice a week. He knew this was a big change for me.”

Married for 28 years, the father of four (three still at home), Romano says, I would get sad during hiatus, I wasn’t getting depressed, I was aimless. OK, you’re this middle-aged man now with no direction. Financially I didn’t have to work again, but spiritually and emotionally I did. My family’s most important, but when I’m happy I’m a better parent and better husband, and work makes me happy.”

STANDUPS SUBSTITUTE FOR TEACHERS IN SITCOM

Another TV sitcom about teachers will be taking attendance on Thursday when “Those Who Can’t” arrives on truTV. Comprised of three standups from Denver, the show started as a web series and multiplied (and subtracted) from there. One of comedians, Adam Clayton Holland, actually served as a substitute teacher for a year and a half, and says that some of his inspiration comes from that experience.

“When I was doing it, I was probably 22, and there were moments where I would be teaching middle-school kids, like, fifth, sixth, seventh grade, where I just totally lost control completely,” he says.

“And I would be, like, ‘I’m just going to shut the door and hope no administrators hear what’s going on in here and watch the clock as they just do whatever they’re going to do for 43 minutes.’ And I would get that paycheck at the end of the day. I actually have a lot of respect for teachers because I couldn’t do it.”

ERASING MEMORY MAY NOT BE FICTION

Ever wonder what it would be like if our memories could be wiped clean like the film “Eternal Sunshine of the Spotless Mind”? Would it be all sunshine and rainbows? Well, PBS’ “Nova” is going to examine that premise with “Memory Hackers,” airing Wednesday. Not so fast, says André Fenton, professor of neuroscience at New York University, whose work involves erasing memory.

“The very idea that you could selectively remove memories is certainly something that we haven’t exactly accomplished, at least in the way that the movie portrays,” he says. “But we’re very close to being able to do that and, arguably, we’ve actually done things like that. But I would call that a parlor trick, rather than in a fundamental way that the movie shows. And given our knowledge of the fundamental biology of how information is stored in the brain, it’s very easy to imagine several schemes that you should be able to pull that off with. It’s a matter of whether we should try.”

Next Monday Hulu will begin streaming Stephen King’s classic time-travel tale “11.22.63.” It’s the story of a high school teacher who is thrust back in time to prevent the assassination of President John Kennedy. The show is being produced by J. J. Abrams, (“Star Wars: Episode VII – The Force Awakens”) adapted by Bridget Carpenter (“The Red Road”), and stars James Franco (“Penny Dreadful.”)

Abrams explains how he decides on tales he longs to tell. “For me, great stories work where they pose questions that make you lean in, that make you want to know what comes next,” says Abrams.

“A lot of times when we see movies or watch shows that spoon-feed information, you find yourself often leaning away. You don’t want to know the information. So one of my favorite things about Stephen King and the remarkable work that Bridget has done on this series, is that they’ve both told stories that were so incredibly compelling and grab you by the heart and grab you by the throat and just drag you through this thing. And there is a power to the premise, but a power to the telling … ”