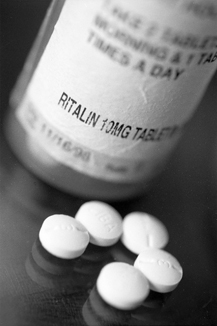 As college students rev up for final exams, thousands will snub the coffee, Vivarin and Red Bull and reach instead for far more potent study aids in illegal prescriptions of Ritalin and Adderall.

This year, two University of Miami students say they've created a legal alternative, a dietary supplement called Focuset, Advanced Student Concentration Formula. Just in time for finals, Jason Neufeld and Justin Hertzberg are offering a money-backed guarantee it's got what students need to pull those all-nighters.

With Focuset just launched, it's too early to tell how – or if ­ it will catch on with students. And while dietary supplements include natural ingredients, that doesn't necessarily make them safe, doctors have warned.

But the new business does point to the popularity of attention deficit disorder drugs: A study published last year in the journal Addiction found that as many as 25 percent of students surveyed on some campuses said they had misused ADHD medications.

The graduate students, both 25 and getting joint degrees in law and business, say they saw prescription abuse among their peers – especially at the graduate level, where heavy workloads and deadlines are constant. Students have long crushed and snorted Ritalin and Adderall, attention deficit disorder drugs also known as academic steroids.

Hertzberg and Neufeld, who themselves were looking for an academic edge, saw a possible solution to the problem – and a business opportunity.

Focuset is an amalgam of B vitamins, caffeinated herbs and other natural extracts. The ingredients are similar to those in other dietary supplements that promote energy and concentration. But the students claim their secret is in the quality of the herbs and vitamins as well as Focuset's unique recipe.

The company Web site, www.focuset.com, boasts an endorsement from Dr. Dennis Padla, a board-certified psychiatrist based in Michigan. Padla, the chief medical adviser in formulating the product, is compensated for representing the company. He said he would not risk his professional reputation by endorsing something he did not feel was safe.

But Dr. Eugenio Rothe, director of the child and adolescent psychiatry clinic at Jackson Memorial Hospital, wasn't so sure. While the ingredients seemed harmless, he said he could see no more benefit to taking the supplement than drinking a cup of coffee. He thinks the product was poorly conceived.

Students would be wise to study ahead of time, he says, so they don't have to use amphetamines or Focuset to pull all-nighters. In any case, most experts recommend checking with a doctor before taking a supplement, especially since some supplements have been known to cause serious reactions in consumers.