The majestic legacy of the National Park Service 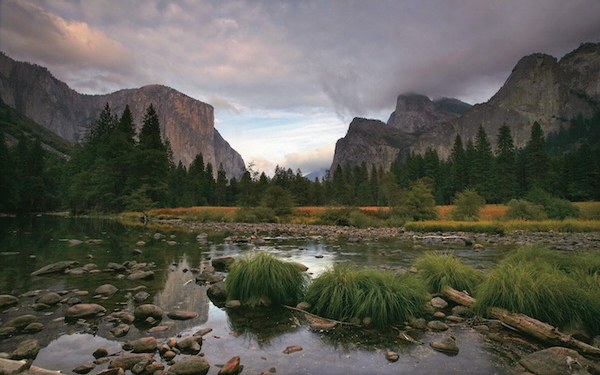 Like many great love affairs, mine began in childhood. The details are sketchy, drawn from memory and from photographs in a family album, old Super 8s. Our two-toned station wagon is loaded up in the driveway of the Altadena, Calif., home, room for five, our gear and a black Labrador named Sheba.

The Central Valley is a pre-dawn blur, but Yosemite National Park is not. We stayed in the tent cabins at Curry Village, strung clotheslines from the rafters, and although the specifics — what we did, where we walked — are lost, my impressions of its magnificent valley somehow linger. Something was different about this place, the air crisper, the sunlight sharper than in the city, the scent of pine richer.

I waded in the shallows of the Merced River, and at night we watched, from the valley floor, ribbons of light, the fire falls, tumbling off Glacier Point in a shower of sparks and glowing embers.

Today, as the National Park Service marks 100 years, I find it hard to believe that the whiskered and top-hatted politicians of the day had the interests of a 4-year-old boy in mind when they agreed to this historic legislation. But they certainly did.

By signing the National Park Service Organic Act on Aug. 25, 1916, President Woodrow Wilson established a mechanism for future funding, administration and growth of a fledgling system of national parks, which until then had been managed mostly by the U.S. Cavalry.

Wilson’s bill culminated nearly 50 years of conservation efforts in this country, a piecemeal effort in the aftermath of the Civil War to protect and preserve forests, canyons and buttes in the West from development and degradation. His intentions, however, were not entirely altruistic.

In an election year that saw Democrats and Republicans deadlocked, Wilson understood that the new bill might appeal to the voters of Theodore Roosevelt’s Progressive Party, and although the final legislation bore Wilson’s signature, it really did belong to Roosevelt, who had worked ceaselessly — often circumventing Congress — to preserve these spaces.

He had seen profound changes to the landscape and wildlife of North America, species driven to extinction, range lands corrupted by cattle companies, mining interests and commercial concerns. The wilderness, he believed, belonged to every citizen, present and future.

“Our duty to the whole, including the unborn generations, bids us to restrain an unprincipled present-day minority from wasting the heritage of these unborn generations,” Roosevelt wrote in 1916. It was enough to make a 4-year-old happy as he floated boats in the shallows of the Merced.

Since its founding, the National Park Service has grown in scale — more than 84 million acres, more than 400 properties from historic parks to national monuments — and in philosophy.

Fifty years in, the agency adapted the lessons of the 1950s and 1960s. It was easy, perhaps, in the beginning to see a tree rising hundreds of feet and say it deserved saving (though many were not) or to stare into a canyon nearly a mile deep and declare nothing should detract from that view.

But what about a riverbed in Colorado where in 1864 about 200 Cheyenne and Arapaho Indians were killed? Or a bridge in Alabama where nonviolent civil rights protesters were set upon with nightsticks and tear gas by state troopers? Or a cemetery for Africans, some free, most slaves, in Lower Manhattan that for 200 years had been buried beneath a landfill?

The park units of recent years are more provocative than scenic, more thoughtful than awe-inspiring, and as curator of their stories, the National Park Service has tried to address the puzzle of our national identity. Critics may contend that not enough has been done, but at a time when conversations about race and gender are difficult, if not avoided, the agency’s efforts at clarity set it apart from many other civic institutions.

The National Park Service teaches us that our heritage has as much to do with this country’s natural wonders as with its history. Our reactions to each — whether hiking the Great Smoky Mountains or retracing the steps of the Rev. Martin Luther King Jr. — continue to help shape and define who we are.

Nor are the lessons inviolable. In 1981, Secretary of the Interior James Watt nearly allowed a strip mine to open within a few miles of Bryce Canyon National Park. In 1994, the Walt Disney Co. proposed building a theme park in Virginia near Bull Run and Manassas National Battlefield Park, and recently, Delaware North laid claim by way of trademark law to the names of Yosemite’s beloved Ahwahnee and Wawona hotels.

The challenges in the 21st century are no less difficult than those in the past. Traffic clogs popular park roads. Deferred maintenance takes a toll, and there is a change in the national psyche as well. In 1916, getting outdoors was national entertainment, but no more. In an era defined by tablets and cellphones, can the park service be relevant to a new generation?

Under assault and wondrous, flawed yet evolving, our national parks reflect America and the American experience, and in the long view — 100 years now — the National Park Service has proved both adaptive and resourceful.

Years ago, grizzlies were fed at garbage dumps for visitors’ enjoyment, and forest fires were suppressed with tactical efficiency. But no more.

And those ribbons of light, the fire falls of Yosemite? Banned in 1968, they are preserved in the memories of a generation — and on YouTube.

Travel
All of California’s national parks are open. Kind of. We can explain
425 views

Travel
Whether Travel is a Right or a Privilege, it Comes with Responsibilities, Travelers
336 views

Travel
Travel during the pandemic: 7 things you need to know
380 views