Troy Wolverton: Diving into the world of drones 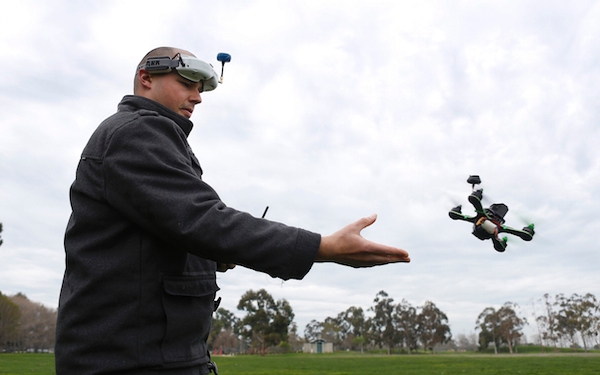 Owning a drone wasn’t exactly like how Mark Hull envisioned it.

When the 41-year-old product director at LinkedIn bought his first unmanned aerial vehicle about a year ago, he thought that flying it would be something fun to do with his kids.

But that’s not how it turned out. His kids quickly lost interest, and Mark soon realized that with the automated flight controls, the actual piloting of the drone wasn’t nearly as interesting as another aspect of the gadget: using it to take pictures from a completely different perspective than normal.

Using the gadget soon became one of Hull’s hobbies and he took the device with him when he traveled to the mountains, to parks and out to the ocean. Hull enjoyed the experience so much that when he inadvertently crashed his DJI Phantom 2 into the ocean, he threw on his son’s goggles and dived in after it. And after he gave up the search, he soon bought a replacement. He had a family reunion coming up and he wanted to capture it with a drone.

“In terms of capturing family moments, it does make it a special capture,” said Hull, who lives in San Jose, Calif. “You’re seeing something from a hundred feet up. It’s something you expect to see from a movie.”

Hull is just one of a growing number of people who have become captivated by drones. The number of personal drones sold globally grew from about 242,000 in 2013 to an estimated 2.2 million last year, according to Gartner.

At your local Best Buy or other electronics store, you can find simple, remote-controlled quadcopters that sell for as little as $30. For around $100, you’ll find UAVs like Parrots mini-drones that you can control with a smartphone and that will do simple tricks at the touch of a button.

Starting at around $500 and going on past several thousand dollars, you can find more capable pro-sumer models from the likes of Parrot, DJI and 3DR that offer longer flight times, the ability to use GPS to pre-program precise flight plans and the capability of carrying and controlling high-resolution cameras. Many of these drones now have a “follow me” feature that allows the drone to track a particular person and can potentially be used to record things like someone skiing down a hill or mountain biker going down a trail.

Analysts and experts are seeing a wide range of applications for UAVs for corporate and institutional uses. They’re already being used by professionals to shoot movies and capture aerial views. They have a lot of promise for doing tasks that are dangerous or difficult for people to do, such as inspecting cell towers or roofs or whole fields of crops in the field. Amazon and other companies are talking about using them to deliver packages in place of UPS or FedEx. At the CES conference last month, one company was even showing off a drone that was designed to serve as a transportation vehicle for individual people.

But for all the buzz around drones, it’s still unclear how much they’ll appeal to general consumers. The more capable drones are not only expensive, they can be difficult to learn to fly and control. They’re also bulky and typically require consumers to carry around a whole backpack full of accessories and extra batteries. And regulations limit where consumers can fly them, such as near airports.

What’s more, beyond using them to take pictures, shoot video and a few other things, it’s not clear how consumers will use them.

“It’s hard to say what’s going to be the killer feature beyond photography,” said Brian Blau, a research director at Gartner, a consulting firm that works with tech companies. “It certainly is an interesting and fun toy for consumers, but it’s not like a smartphone” or other general-purpose computing device, he said.

Right now, the main groups of buyers of drones for personal uses are hobbyists, tech enthusiasts and photography buffs. In addition to shooting pictures with them, they’re buying them to experiment with the technology or even to race them.

I count myself among the experimenters. I bought my son a Parrot Rolling Spider mini-drone a year ago as a Christmas present. But it was as much for me to play with as for him.

He lost interest fairly quickly and I did, too. In part because it was somewhat difficult to fly. We crashed it a couple of times and kept worrying about getting it stuck in a tree. The battery only lasted for about seven minutes at a time, so we didn’t get to play with it very long before we needed to recharge it.

Count Drew Price as a much more enthusiastic drone user. The robotics engineer at NASA had his first experience with drones about two years ago when his colleagues wanted to experiment with one for aerial photography.

That particular use didn’t excite him much, but the drone technology itself did. Pretty soon, he was ordering drone kits and parts and building his own UAVs. Not long after that, he found a group of enthusiasts near his office to fly and race drones, and he was hooked.

Price, 32, now owns around 10 UAVs and races them every day. He’s even been to several competitions, including the first National Drone Racing Championship, which was held in Sacramento last summer. His love for drone racing, in which the UAVs zoom around a course at speeds of up to 80 miles an hour, came naturally to him. He grew up playing racing video games, and he loves driving fast cars and motorcycles.

“I’ve always been a speed junkie, wanting to go faster. But I started to realize that I don’t want to die,” said the Milpitas resident. “This gave me that excitement with the safety of me sitting in a chair.”

So drones are offering racing thrills, some amazing views of the world — and a bit of frustration even for fans. In the future, they may deliver packages or even people.

Welcome to the drone age. It’s going to be fun to see how it develops.