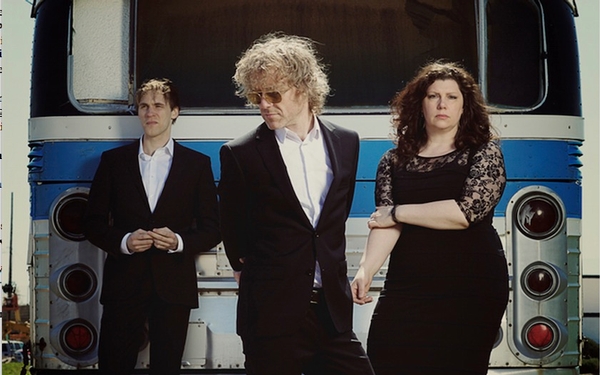 Low has been making fine albums for two decades, even though the trio works within seemingly narrow confines: drums, bass, guitar, low-key vocals, beautiful harmonies, measured tempos. Slow and quiet is the band’s preferred musical vocabulary, but Alan Sparhawk, Mimi Parker and Steve Garrington aren’t bound by it. On their latest album, “Ones and Sixes” (Sub Pop), things get downright booming, with rumbling bass tones and electronic buzz that a hip-hop fan might love.

Coproducer BJ Burton gets credit for beefing up the band’s low-end mix, Sparhawk says, and so does Kanye West. “We’re talking about ‘Yeezus,’” says the singer-guitarist, referencing West’s abrasive 2013 album. “Hip-hop records are where the new edge is the last few years. … Going into this, we were talking about how to make this hit harder, make the silence louder and make the low end kill without even hearing it.”

The Low album’s dynamic range even took aback some of engineers at the mastering plant for the vinyl version. “When we sent in the record, they said, ‘This is the loudest record we’ve had in here for a few years. I can’t believe it’s from you guys,’” Sparhawk says. “We actually had to go back and mix it again for vinyl and kind of temper a few things on it so basically the needle wouldn’t jump out of the groove.”

Not that anyone would mistake “Ones and Sixes” for a Kanye West album, but its more volatile tone suits a series of songs in which the narrators, as voiced by Parker and Sparhawk, struggle to know themselves and each other, often too late to reverse the oncoming “Landslide,” as one of the album’s more powerful tracks underlines.

“You let your subconscious wander, and what comes out is what I’ve been going through, whether in a relationship, or as a human being looking at the world, as a man or an American,” Sparhawk says. “There are a couple of characters. Even in songs where I’m doing lead (vocals), there is another character in there (Parker) telling a different version of what is going on, a different story, even a different melody.”

Parker and Sparhawk, who are married and have two children, ages 15 and 11, “are trying to live, raise kids, face a world that’s more and more perceived as being more dangerous, more hateful. And at the same time we’re in a relationship trying to figure out how does this work?”

In remaining true to where they are in their lives, Sparhawk and Parker write personal songs with universal themes. Headlines from around the world make it impossible not to relate when Parker sings, in one of the album’s most powerful tracks, “All you innocents, make a run for it.” Or when in another song Sparhawk distills a relationship to two questions: “What part of me don’t you know? What part of me don’t you own?”

“Every phase, decade, wave of life you experience together is a new unknown, a new unexpected challenge,” Sparhawk says. “Being married as long as we have, the tensions aren’t unique to us. How do you get along? How do I balance this person who I do know and then I don’t know? How do I know when I’m completely giving everything to this? And can I give everything to this when so much is unknown? It can get into Hallmark territory. But it’s an intense thing, and it’s worth doing, and worth going through difficult things together to have.”

The singer says the album’s sometimes ruthless self-interrogation and adventurous sonics are an artistic choice as much as a personal one.

“We’ve been doing this a while, and there’s a very real danger as an artist of falling back on an old way of doing stuff,” he says. “There’s a way to pull that off where you sort of stand pat with integrity, but every once in a while we also have this tendency to try to push it a bit.”

On the previous Low album, “The Invisible Way,” co-produced by Wilco’s Jeff Tweedy in 2013, “We were very much about staying out of the way and letting the song be, not messing with it and giving it a dark shadow. But historically, I’m inclined to want to put something counter into anything starting to look too content, pretty, satisfied. On some songs on ‘Invisible Way,’ I was trying to sit back and take my ego out of there and let it be pretty if it wanted to.”

So is Sparhawk saying he let his ego run wild on “Ones and Sixes”?

He laughs. “Yeah, maybe. I surrendered to the undeniable amorphous dissonance. Amorphous dissonance is on the rise. I was hiding it a little better and letting it brew the last time. But I remember pretty distinctly right after doing that last record that this one would swing in a different direction.”