Lamb of God goes for the sturm und drang 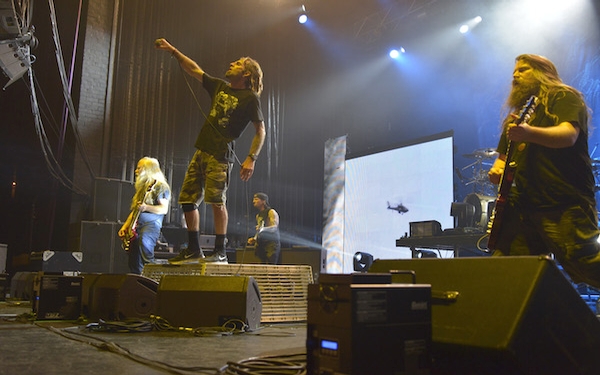 Even for an apocalyptic thrash-metal band, Lamb of God’s latest album “VII: Sturm Und Drang” is dark. One song, “Torches,” is about a Czech man who set himself on fire to protest the Soviet Union invasion of his country; another, “Anthropoid,” deals with the World War II assassination attempt of murderous Nazi architect Reinhard Heydrich. All Lamb of God albums are almost absurdly intense, but “Sturm Und Drang” is especially so, in part because the band wrote it after frontman Randy Blythe spent five weeks in prison.

Fortunately for Blythe, he has the showman’s ability to not experience the emotions of his songs onstage. “It’s pretty intense when I record, at least the first three passes, because that’s where it really comes across,” says the 44-year-old singer in a half-hour phone interview from outside his home in Richmond, Va. “But when you play these songs over and over, night after night … it’s almost a total muscle-memory experience. I don’t think I’d be able to do it if I had to get up there and relive everything, night after night. My emotions onstage are much more tempered by what kind of day I’ve had that day.”

Blythe has had far too many bad days in recent years. In 2012, Lamb of God was in Prague to play a scheduled concert when local police showed up and arrested him on manslaughter charges. Two years earlier, 19-year-old Daniel Nosek had stormed the stage during a Lamb of God show in the same city, and Blythe pushed him away; Nosek hit his head sometime later, then went into a coma and died within a few weeks.

Blythe wound up in a Czech prison for five weeks.

A court later cleared Blythe of criminal charges, ruling that he was not liable for the fan’s death. But Blythe, whose speaking voice is friendly, low and crinkly, not at all like the guttural shrieker he portrays throughout Lamb of God albums and concerts, remains tortured by the experience. “There’s a sadness to the whole thing,” he says. “The ultimate takeaway from that whole experience wasn’t that I went to prison, wasn’t that I had to go to trial, wasn’t that my band lost a bunch of money, wasn’t that my family was worried, any of that stuff. The ultimate takeaway is a fan of my band, a young man, lost his life.

“That’s super-sad to me, to this day, and that’ll always be with me,” Blythe continues. “But I have to live in the moment. Otherwise, I might as well just hang it up, and kill myself or something. … Sometimes life isn’t fun and you have to deal with it.”

Blythe had performed in punk-rock bands in high school but didn’t get serious about music until he attended Virginia Commonwealth University, majoring in English literature. He hooked up with three of his classmates in a band called Burn the Priest, which evolved into Lamb of God for its 1998 debut. At first, Blythe had no interest in being in a metal band, but he turned out to have a knack for screaming like a “terribly wounded, very angry mountain ape” without losing his voice, as he writes in “Dark Days,” a memoir about the trial and prison experience that he released last year.

“I don’t come from the heavy metal scene. I don’t listen to a lot of heavy metal, to this day. My kid brother listens to a lot of death metal, and he was turning me on to bands like Obituary and Bolt Thrower,” Blythe says. “One day, I was sitting at the bar with some friends. They had metal playing on the stereo and I went ‘rrrrrrr,’ and they went, ‘Wow, you can do that?’ I said, ‘Yeah, it wasn’t very hard.’”

Although the band tours regularly in Europe, Blythe hasn’t been especially lucky there in recent years. Last November, a gang of Dublin kids attacked him outside his hotel and whacked him on the head with a heavy object. Later, the band canceled its European tour in the wake of the Paris terrorist attacks, including the Bataclan nightclub mass shooting during the Eagles of Death Metal’s performance. (“I’m not going to play around with my life or the lives of others if I feel there is a dangerous situation I could potentially stop from occurring by simply saying, ‘The show is over,’” Blythe wrote at the time.)

“Yeah, Europe,” he says by phone. “I’ve had some interesting times there. But I’ll go back there if the time is right.”

After Blythe left prison in August 2012, Lamb of God quickly resumed its tour. Then he went on trial. Then the band toured again. Then he wrote a book and told reporters he finally understood a quote he’d once heard: “Writing a book is easy. Just sit and stare at the blank page until your eyeballs bleed.” By the time he’d turned in his first draft, the rest of the band had begun to write “Sturm Und Drang” the album came out last year and the band toured some more. “The record came out really well, but I could’ve used more time in between,” Blythe says. “I haven’t had a break yet. I’m looking forward to one.”