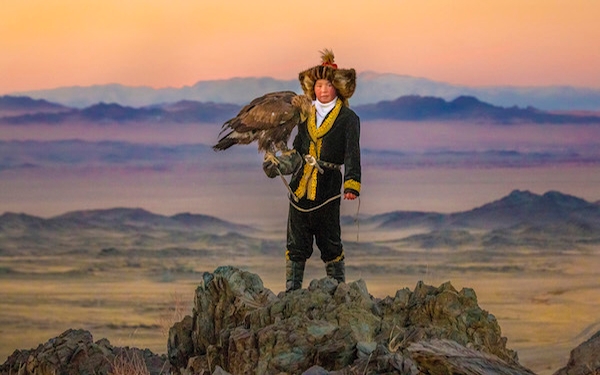 PARK CITY, Utah — “The Eagle Huntress,” a documentary that’s as unlikely as it is enchanting, landed in Sundance, and falling under its sway is inevitable.

The story introduces Aisholpan, a 13-year-old girl from Mongolia who bucked 2,000 years of tradition to become the first female to hunt with formidible golden eagles in a locale director Otto Bell describes as “the most remote part of the least populated country in the world. It’s not the end of the world but you can see it from there.”

A demure, shy girl with bright eyes and a shining smile, Aisholpan and her parents made the trip to Park City to promote the film and to appear in a press event with eagles provided by the Comanche nation. Her own eagle, Akkatnat or White Wings, is back home in Mongolia where the rest of her nomadic family is, and when asked if she missed the enormous beast, Aisholpan’s face lit up like a star.

Some scholars believe that the whole idea of hunting with birds like eagles may have originated in Mongolia. The great conqueror Ghenghis Khan was said to have kept a thousand eagles, and to have so admired the mettle of eagle hunters that he used them as personal bodyguards.

Nomadic herders like Aisholpan’s father Nurgaiv, himself the seventh generation of male-only hunters, use the birds to go after foxes and other small animals both for food and for fur to keep warm in the savage winters. Despite scoffing from traditionalists, when Aisholpan expresed an interest in become a hunter, her father readily agreed.

“She’s been transfixed by eagles since she was a kid,” says Bell. “It’s masterful to see how she works with them.”

Before he became involved with Aisholpan and her quest, the energetic 34-year-old Bell had worked for nearly 10 years as a director of shorter branded content pieces for major corporate clients.

“I’d worked all over, Uganda, Egypt, Japan, Vietnam, I was used to foreign languages, to working with a translator, so when this opportunity came up I didn’t hesitate, the British director says, adding with a laugh, “perhaps I should have.”

For the story of how “Eagle Huntress’ came to be made is a tale that is itself so filled with obstacles, derring do and coincidence, it almost feels like this film was simply fated to be made.

It all began with a photo essay on eagle hunters by still photographer Asher Svidensky that appeared on the BBC’s web site and included shots of Aisholpan working with her father’s eagle.

“I saw it the day it came out and I jumped on it,” says Bell, which was a good thing because the photos soon became an internet sensation. “I contacted the photographer and was quickly on a plane to Mongolia.”

Bell met and had tea with Aisholpan, her father Nurgaiv and her mother Alma on July 4, 2014, a date he remembers because of what happened next.

“We were talking about the possibility of making a film and Nurgaiv said, ‘today we’re going to steal an eagle chick for Aisholpan to train. Is this the kind of thing you’d be interested in filming?’ I said, ‘God yes.’

“It turns out you have only a two or three day window when the eagle chick can live outside the nest but hasn’t flown away. It’s very rare to be able to come in at the beginning of a story, but that is what we did.”

Bell’s small crew, led by veteran cinematographer Simon Niblett and ranging from two to five people, spent a total of three months in Mongolia off and on and brought in 700 kilos of gear, including an S1000 drone and a 30-foot crane that packs away into a case suitable for a snowboard.

“Though we didn’t know it as we were shooting it, the film fell into a sequence of events,” the director relates. “Every time we went back, Aisholpan was facing a fresh obstacle.”

First came the snatching of the eaglet, then an annual eagle hunters tournament in the town of Ulgii that drew some 70 veteran hunters to compete. Then came the ultimate challenge, actual hunting in Mongolia’s devastating winter.

“It was minus 50 degrees, brutally cold conditions, all our batteries died, hands would freeze to the tripod, what was supposed to take five days took to the end of the month,” Bell recalls with a shudder. And then there was the little matter of his arm.

“I had broken my arm slipping on ice in New York, and the doctor absolutely forbid me to travel. I said I was going so they wrapped it a cast so large I couldn’t close my jacket even though it was bloody freezing. And there were no roads, so there was jarring all the time we traveled. It was hellish.”

Also problematic was actually getting the film paid for and finished. “I dragged the film on myself for as long as I could, using credit cards and my paltry savings, I called in favors from all those years of shooting branded content,” but it was not enough.

So Bell sent a 10-minute trailer to documentarian Morgan Spurlock, “he said he’d never seen anything like this” and came on executive producer.