Looking for another sign of a weakened China economy? Try the rent-a-foreigner market 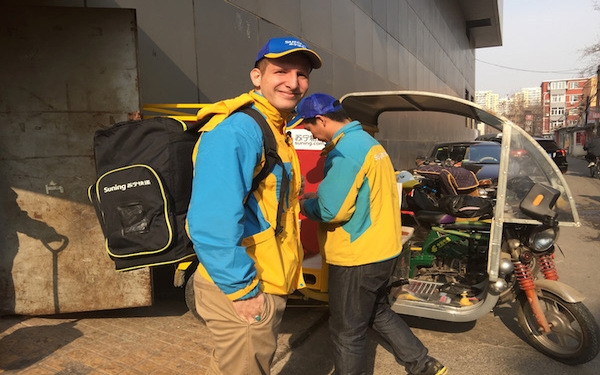 BEIJING — To take stock of the Chinese economy, you can look at any number of traditional measures: Gross domestic product is growing at a slower pace, the equity markets are plunging, the currency’s value is ebbing.

And now there’s another indicator of change: The rent-a-foreigner market appears to be weakening, and going downscale.

Just a few years ago, foreigners who came to China to study or teach English were in high demand. Agencies hired them to pose as scientists, architects, engineers and models to lend an “international,” high-class flair to press conferences, meetings and sales pitches, thereby goosing business transactions. The phenomenon was in many ways a symptom of — and further fuel for — go-go growth built on dubious foundations.

The jobs were often absurd: One expat, Mitch Moxley, was paid $1,000 to pose as a “quality control expert” representing a nonexistent California-based company; he chronicled his experience in a 2010 piece for the Atlantic headlined “Rent a White Guy.”

In 2008, a Scottish woman was hired to pretend to be an oil tycoon at a petroleum drilling conference in Shandong province. “We just had to be at the dinner and an opening ceremony — we were told not to mention that we live in China,” she said, requesting anonymity to avoid damaging her future employment prospects.

A few years ago, “professional foreigners” in Chengdu could make about $160 to $220 “for just a few hours of standing around” — enough to cover a month’s rent, said David Borenstein, the director of a TV documentary about the phenomenon called “China Dreamland.”

But times are changing. Especially in larger metropolises, the practice seems to have waned. The factors behind the shift are complex, but may include a corruption crackdown, the increasing sophistication of the Chinese consumer, and growing scrutiny from authorities and cultural critics.

“The slowdown in the foreigner industry has made it really hard for a lot of good people who were supporting their families as professional laowai,” said Borenstein, using the Chinese word for foreigners. He calculates rates have fallen by as much as 75 percent.

Zhang Yiwu, a professor of Chinese literature and language at Peking University, called on companies last year to abandon rent-a-foreigner gigs. After 30 years of economic reform and opening, he wrote in an op-ed in the Global Times newspaper, China needs to have more “cultural confidence” and halt this “absurd phenomenon.”

Max Liu, founder of Fun Model Management, said the rent-a-foreigner fad in big cities like Beijing and Shanghai has worn off.

“It’s less and less in Beijing and Shanghai, because people are used to seeing foreigners,” he said. “But still, if you go to cities like Wuhan, Chengdu, those people there, it’s like ‘Oh, you brought someone from abroad, they must be an expert in something.’”

In China’s so-called “first tier cities,” the casual gigs that expats are getting have become more campy and lowbrow. Last summer, a company called Sweetie Salad grabbed attention when it hired dozens of foreign men to dress up as Spartans — wearing skin tight-shorts, sandals, capes and little else — to promote its delivery service in Beijing.

The appliance retailer Suning — sort of a Chinese Best Buy — made headlines this month with a PR stunt in which foreigners were hired not as faux Ph.D.s, but for the menial job of delivering packages ahead of the busy Chinese New Year holiday.

In both cases, Chinese authorities were not amused. The Spartan spectacle was quickly brought to an end by Beijing police, who detained the performers for “disrupting public order.” And publicity around the deliverymen gigs prompted immigration officials to investigate whether some of Suning’s temp workers were violating the terms of their student visas.

Still, in a racially homogeneous society like China’s, and particularly in smaller cities, foreigners still are objects of fascination. Suning’s marketing stunt grabbed the attention of the Chinese press, which seemed intrigued by the notion that expats might stoop to delivering packages.

The state-run China Daily ran not one but two stories on Suning’s recruitment drive, splashing a photo of Minnesotan Samuel Keith across the front page on Jan. 29.

Akmal Abdurakhimov, 21, a Muscovite enrolled at the China University of Petroleum, indicated that the work had an almost minstrel flavor: “People open the door, see me and go, ‘Laowai!’” he said, recounting how customers reacted to his presence as some sort of exotic practical joke.

Which, in some sense, may have been true.

Keith, a 26-year-old Mandarin student at Peking University who’s an international business major at the University of Arkansas, couldn’t read the addresses on the boxes, hardly speaks enough Chinese to call customers to see if they’re home, and is unfamiliar with Beijing’s streets.

“I’m supposed to knock on the door, and when the customer answers, pull this out and say, ‘Xin Nian Kuai Le’ (Happy New Year),” Keith said, explaining his duties and awkwardly holding up a large red-and-gold decorative knot festooned with auspicious Chinese characters.

Although a regular Suning deliveryman held Keith’s hand every step of the way, it was still slow going.

In his first two days with Suning, Keith said he delivered just five or six packages — and gave as many interviews. (At midday Thursday, after Keith and his hand-holder, Li Yunwang, finally managed to deliver their first package with a gaggle of press in tow, Li turned to one reporter and said dryly, “Normally by this hour I’ve delivered 30 or 40.”)

Suning marketing specialist Jessica Fan wouldn’t say how much the foreigners were being paid. But recruits indicated the scale ranged from about $90 to $150 per day — hardly stratospheric, although double or triple what a typical deliveryman makes. Fan insisted that the company was hiring foreigners mainly because they were facing a deliveryman shortage as the holiday approached.

But Jeffrey Towson, a professor of investment at Peking University, said the notion was preposterous. “China has a lot of shortages,” he said. “People isn’t one of them.”

Keith was later questioned by immigration authorities; he said he was not taking any money for the Suning gig.

For expats who do take rent-a-foreigner jobs, the blatant racism in the pay scales can be a bit jarring.

Zhang Rui, a marketing employee of Liaocheng Global United America Cultural Communications, an employment agency, said the pay for black hires to appear at trade fairs and business meetings starts at about $75 a day. Whites, Zhang said, begin at $150.

“White people are very confident. … They have more class. If it is a formal meeting, a white person’s presence is more convincing,” Zhang said. “So white people are normally preferred for the culture or academic-related events. Black people are hired for bar openings, trade events and commodity promotions.”

In a certain light, the changes in the rent-a-foreigner market — and the government’s increased scrutiny — could be seen as a positive indicator for the Chinese economy. It may reflect consumers’ growing savvy and more sophisticated tastes, not to mention an unwinding of over-leveraged, smoke-and-mirrors deal-making with little grounding in economic reality.

“It’s cringe-worthy to see people pretending to be fake engineers to sustain a real estate bubble,” Borenstein said. “At least they can remind us of how utterly absurd finance capitalism has become.”