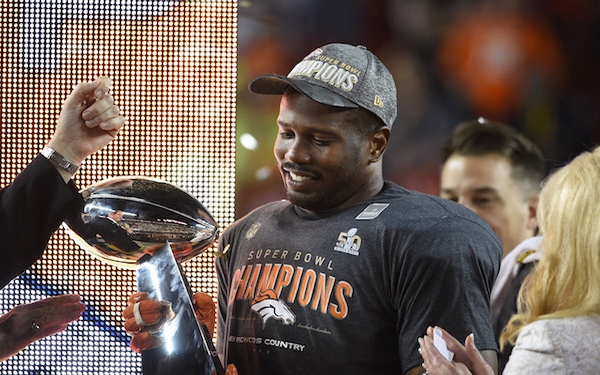 SANTA CLARA, Calif. — Cam Newton might be Superman. But the Broncos have the real M-Von-P.

Von Miller is the best player on the best team in football. On Sunday, he was Superman’s Kryptonite.

And he might have sent Peyton Manning off a champion.

In a clunky, bizarre 50th Super Bowl, the Denver Broncos defense was the truth. Newton was lost. And Manning — well, he handed the ball off well enough to win.

They say the NFL is a passing league.

Sometimes an overpowering defense is enough.

The Broncos won with just 194 yards of offense, 11 first downs and one offensive touchdown.

“This team’s been special all year long,” Denver coach Gary Kubiak said. “This football game’s exactly how we won all year long. … We call ourselves the grinders, and we grinded one more time to win a championship.”

And because they did, a non-quarterback — Miller — won the Super Bowl’s Most Valuable Player award for just the third time in the past decade.

And no one can argue against the pick.

Miller simply operated on another level.

Miller finished with 2½ sacks — all on Panthers right tackle Mike Remmers — and two forced fumbles, but the stat line didn’t do his impact justice.

While the game’s outcome was still in doubt, he singlehandedly ended two Carolina drives.

His pressure on third-and-8 late in the third quarter led to a shared sack with Derek Wolfe. But that was just the prelude to the game’s defining play.

Carolina faced third-and-9 on its own 25 with four minutes remaining. The Broncos clung to a six-point lead. They desperately needed a stop.

He again beat Remmers and drilled Newton before he could even deliver the pass. The ball squirted lose. Newton basically stood around watched.

T.J. Ward fell on it. The game was over, particularly after C.J. Anderson punched in a 2-yard touchdown.

As a result Manning is a champion for a second time — despite completing just 13 of 23 passes for 141 yards.

He was sacked five times and fumbled twice. He also threw an interception.

But somehow, he wasn’t as bad as Newton, who had a nightmare game less than 24 hours after being named the league’s MVP.

Newton was 18 of 41 for 265 yards and threw a pick. The Broncos sacked him six times (they had seven total).

So Manning, not Newton, got the confetti and the title in what might be the final game of his epic career.

“I got some good advice from Tony Dungy: Don’t make an emotional decision,” Manning said, when asked if he will retire. “… I’ll take some time to reflect.”

Reflect on this: The Broncos are world champions.

Because they have the M-Von-P.