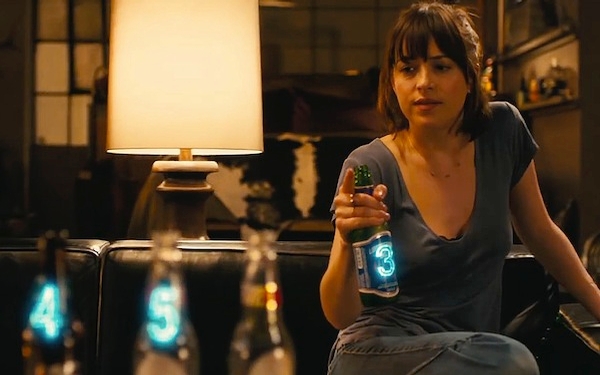 Unless you’re one of the lucky few who constantly finds yourself in a stream of long-term relationships, each more profoundly romantic than the next, then you’ve probably come to grasp the concept of being single in a way that is most meaningful to you. That way may be healthy as can be as you learn to grow more about the inner you and whatnot, or it could be in such a manner where you feel your soul slowly chipping away at itself as it tries to grapple with the loneliness that has showered you for however many years.

Whichever category you may fall into, How to be Single has something to say about the ways in which women in particular can approach the idea of singlehood. It all starts from the perspective of Alice (Dakota Johnson, 50 Shades of Grey), a young woman recently on a self-induced “break” from her long-term college boyfriend, who wants to explore what it truly means to be young and single in the bustle of New York City. From there, first time comedy director Christian Ditter begins to explore how various women around Alice view themselves in the wide scope of the dating world.

Whether its Lucy (Alison Brie, “Community”) who has created her own algorithm to further perfect the online dating process, or if its Robin (Rebel Wilson, Pitch Perfect) whose life’s blood depends on her frequent one-night stands, How to be Single covers a wide variety of perspectives when it comes to that sweet single life.

For Wilson, her character, who breathes off the fumes of sex and partying, is the apple that doesn’t fall too far from the tree of her real life. And that is perfectly okay with her…until maybe it’s not.

Wilson explains, “I am eternally single, and I think I like it a bit too much. I need to be more open to the possibilities of love. I just watch a lot of Iyanla Vanzant, so I know what my problems are: that I'm very independent. I always have been. I went to an all-girls school and we were taught—actually one teacher did try to teach us how to marry a rich man and kill him… But basically, we were always encouraged to go out and live our lives, and from my mother as well, she's like, don't go out and have kids too young, because it’ll ruin your life… but now I’m at the point where things are going so well that I’m trying to find the right person, but just haven’t found it in Hollywood. Surprise, surprise.”

While she jokes about that kind of pressure from outside parties about whether or not being in a relationship is the right thing, that is precisely the message that How to be Single aims to address through its many parties involved, both male and female. It attempts to reframe the idea of what single truly means deep down in its core.

Brie probably puts it best saying, “I think something that this movie looks at very specifically is that being independent doesn't necessarily mean being single. You can be in a relationship and still be in an independent person… Being independent is about doing the things you want to do, knowing who you are and what you want to do, and if you can find a person who wants to do those things with you then that's great.”

For many of the cast members, it was embracing a very sex-positive attitude that excited them, because in so many films women who explore their world in physical terms may usually be cast aside in negative light.

“With this film, I was attracted to the positive outlook on, women especially, exploring relationships with different people, and being confident and comfortable and strong,” Johnson chimed in. “That was the kind of thing that was appealing to me, because that's what's real and honest and there's nothing to be ashamed of. That's what single women do.”

Leslie Mann (Knocked Up), who plays Alice’s successful doctor of a sister who stubbornly rejects all notions of a relationship or family, also agrees, recalling her days of singledom before marrying director Judd Apatow. “I had so much shame when I was single. I would make out with a lot of people, but I would never have sex because I would feel bad the next day,” she recalls. “But I would make out with everyone. And some dry humping… I like the way things are changing though. I think there's nothing wrong with it.”

And what about the guys of How to be Single, you ask? While they may take a backseat to the leading ladies, the men’s roles still find themselves reflective of how the modern love really works. Anders Holm (“Workaholics”) plays a schmoozy bartender who seems to have perfected the so-called sweet bachelor life until a Lucy walks in and makes him rethink his whole formula.

“I think my character has convinced himself that being single is the only way to go, and doesn’t realize that there's a yearning, deep down, that Alison's character kind of brings out when she shows up at his bar and he's like 'Ooh, wait a second. She's kind of perfect and isn't falling for all my tricks that usually work.’ He's kind of forced to see a different side of himself,” explains Holm.

Lacy, on the other hand, plays Ken, a young, rather doe-eyed fella who falls spontaneously for Mann’s character, with little trepidation over their age difference or the fact that she has no time to give him, which to Lacy, makes him that much more believable.

“[Ken’s] a rare character where this relationship is presented to him as an option and he pursues it, although the other half doesn’t respond in kind, you know? I don't think he’s made a decision prior to meeting Meg whether or not he wants or needs a relationship, which ultimately makes him perfect to be in a relationship, because the universe presented him something and now he's continuing to explore that which is, in my experience, the basis for successful relationships,” says Lacy.

What seems to be the general consensus throughout the entire cast is the importance of reevaluating what your own distinct trajectory in the seemingly endless ocean of possible love interests is and exactly how you do that. If you can consistently keep in check what you need and want, then the rest ought to fall into place.

It seems Brie was kept in check by her character the most, remembering one of her worst dates at a Wilco concert, which really ends up informing how she wanted to take control of her future love life.

She explains, “[Lucy’s] created an algorithm to help herself navigate online dating as if online dating were not specific enough. That was really fun to play. You know, it makes it difficult for her in a lot of ways, because the things she's looking for are so specific, it's a question of will you ever find that diamond in the ruff, and she's sort of shutting herself off from every other option. But in the bad dates it makes it very easy for her to kind of being like, ‘I'm getting out of here.’ I know that when I was single, I don't think I would just end a date mid-date, even if I wasn't having a good time. Even if I show up the concert and the guys obscenely drunk, I'm sort of like, 'well I wanna be polite, I gotta stick it out, I'll just stay and hang with this drunk guy.' And I think that's a shitty thing. A lot of the time women feel like they don't want to be rude, or we don't want the guy to think we're a bitch, so we kind of entertain a lot of bad behavior. This character does not.”

And then Wilson boils it down even more, simplifying what we may all already know but many of us choose to ignore in our relationships—that it ultimately comes down to you and your own core of empowerment that drives us onward.

HOW TO BE SINGLE hits theaters Friday, February 12th.