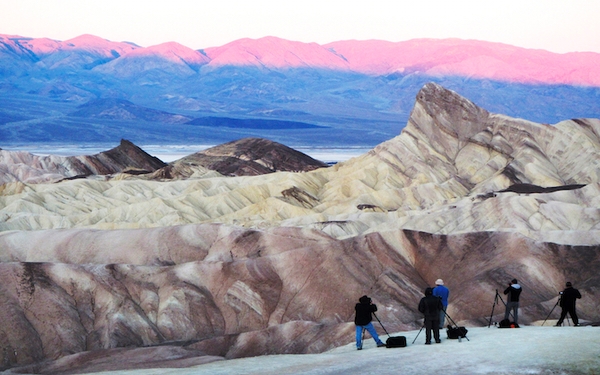 From the moment our car climbed over the rust-colored mountains and descended into boulder-studded valleys, a sense of peaceful solitude was the tone for our weekend in Death Valley National Park.

Only five hours from the coast, the barren landscape and dearth of cars outside our caravan of three added to the feeling that we were a world apart from bustling Southern California, away from civilization altogether, pioneers exploring virgin land.

It felt as though we ventured out onto the surface of Mars, or at least, that’s where my imagination took me.

Of course, we’re not the first people to set foot in Death Valley — far from it — but the vast expanses of open space, absence of structures and preternatural silences can inspire such musings.

It is astonishing that the land in Death Valley remains as pristine as it is, with its history of mining. In 1994, Congress expanded the area’s protection beyond its status as a national monument to that of a national park.

While its land is characterized by sparse vegetation, the rocky terrain is amazingly varied, from salt flats and sand dunes to snowcapped mountains and trickling springs.

We entered the park through the desolate mining town of Trona.

Had we driven an extra 100 miles or so, we could have stopped to visit Manzanar, an internment camp where Japanese Americans were confined during World War II. But on this trip, we concentrated on the area’s ancient history.

Driving into the park from the west meant we could stop by the Trona Pinnacles, jagged peaks formed underwater up to 100,000 years ago in the now dry Searles Lake, according to the Bureau of Land Management. There are more than 500 of these unusual tufa spires in the dry lake basin, their pores and jagged edges reminiscent of corral.

Our group of six left our respective homes at 6:30 a.m. on a Friday, wading through a little Southern California traffic before arriving at our rendezvous point, the Outpost Cafe in Hesperia. From there we would caravan into the park.

After our Trona Pinnacles pit stop, we arrived at our campsite in Furnace Creek by early afternoon with plenty of daylight left to pitch our tents, despite the shortened winter days.

Of the nine campgrounds in the 3 million acre park, Furnace Creek is perhaps the most “plush,” with sinks to wash dishes, RV hookups, fire pits, picnic tables and flushing toilets. It’s also the most expensive, at $18 each night during peak season. (During the park’s sweltering offseason, the price dips to $12 nightly.) It’s also convenient, given the campgrounds’ proximity to Furnace Creek Ranch, which includes a motel and a well-appointed convenience store with craft beer, firewood and decent snacks.

Fifty miles from the Furnace Creek campsite sits the incredible Ubehebe Crater, which was formed as recently as 300 years ago, according to the National Park Service. Visitors park near the crater’s precipice and can hike 600 feet into its core, or climb up and around its rim. We opted for the latter, walking up the pebbly path made up of tiny black volcanic rocks, where we glimpsed neighboring Little Hebe crater in the distance.

Closer to camp lie the rolling Mesquite Flat Sand Dunes that seem to stretch on for miles. Some mounds reach 100 feet in height. Climbing to the top of a few of the taller sandy hills is a must, if only for the view. The fine sand has an almost silky quality, although the tiny particles invariably find their way between your toes and coat your skin, detracting somewhat from the landmark’s appeal.

Salt and other minerals coating the landscape give Death Valley a perennial winter wonderland quality.

Despite its barren landscape, Death Valley isn’t devoid of life. The Devil’s Cornfield, a field of low-lying green brush, is between Ubehebe Crater and Mesquite Flat. A wooden boardwalk at the Salt Creek Trail follows a trickling stream in which pupfish perform a quirky mating ritual in the springtime. Croaking ravens patrol the campgrounds on the hunt for food.

Other desert dwellers, such as the hairy scorpion, kit fox, pallid bat and chuckwalla, are also Death Valley inhabitants, although we didn’t encounter them.

The night before we left, a full moon cast a luminous blue light over the campsite, eliminating the need for flashlights, and dry lightning over the distant mountains further lit up the night sky. Yipping coyotes, audible both from the north and south, intensified the eeriness.

On our last morning, we awoke before dawn to watch the sunrise at Zabriskie Point. The slowly unfurling light painted the distant mountains and marbled rock formations in incredible purple, pink, orange and yellow hues.

Getting there: There are several entry points into the park. We wanted to see the Trona Pinnacles and took I-605 to I-210, then caught I-15 to the 395. The road to turn off the 395, Searles Station, isn't clearly marked, so be sure to keep your eyes peeled for a green sign that says Trona.

Pro tip: Check your tires before you head out. Some of the backcountry paths are unpaved and have sizable holes and rocks that can wreak havoc on smaller cars. That being said, my Toyota sedan did fine.

Weather: Death Valley has highly variable weather and is the hottest and driest place in North America. Between November and March, though, daily highs range from an average of 65 to 82 degrees. After March, average high temperatures climb and by July can reach 116 degrees. Rainfall is near nonexistent. Pack accordingly.

Reservations: Campers should make reservations up to four days in advance during peak season — Oct. 15-April 15 — at 877-444-6777 or recreation.gov. Other times of the year, it is first come, first served.