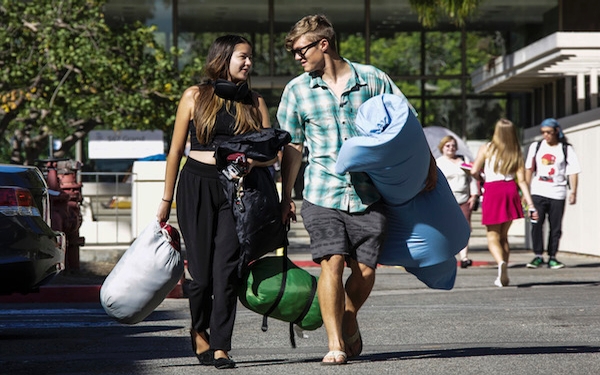 Jocelyn Lo, 20, left, and Jesse Moore, 20, carry their sleeping bags as they leave the area where students camped out in protests over racial bias at Occidental College in LA.

LOS ANGELES — Today’s American college freshman is more liberal, less religious and increasingly committed to civic involvement and political activism compared with those in previous generations, according to a national survey by researchers at the University of California, Los Angeles.

“Collectively, the findings suggest that more students are committed to social justice,” said Kevin Eagan, director of UCLA’s cooperative institutional research program, which has conducted the annual American Freshman survey for the last 50 years. “That may be why they are the most committed to political and civic engagement of any of the previous 49 classes.”

The results released last week showed that one-third of those surveyed said they were “liberal” or “far left,” the highest proportion in four decades, while one-fifth described themselves as “conservative” or “far right.”

But their attitudes were markedly different according to race and ethnicity.

Although interest in political and civic activism has grown among all students, African-American and Latino students were far more likely than Asians and whites to expect to participate in a campus demonstration. They were also more likely to believe it important to promote racial understanding and influence politics.

For instance, only 6 percent of Asians planned to participate in a protest or felt it important to influence politics, compared with more than twice that share for African-Americans.

The UCLA researchers said the heightened interest in political activism could be the result of students witnessing the recent wave of protests against police shootings of African-American men and student demonstrations against campus treatment of minorities at Claremont McKenna College and Occidental College in Southern California, the University of Missouri and elsewhere.

Whether the enhanced political interest will affect the presidential election this year is another matter.

Although Barack Obama produced a record turnout of young voters in 2008 — and won the backing of 66 percent of those under 30 years old — young people still have the lowest voting rates of any age group.

“We certainly see students embracing more of the progressive perspectives,” Eagan said. “But will it actually translate to action?

“If they organize, protest and show up at the polls, they may have a role in shaping the public discourse on issues related to social inequality, equity and discrimination,” he said. “By contrast, if these students do not follow through on their intentions and goals, the enthusiastic support we’re seeing for addressing social justice concerns will likely diminish, eliminating the potential for a broader impact in politics or American life.”

The researchers surveyed more than 141,000 first-time, full-time students who entered 199 four-year U.S. colleges and universities in 2015.

Despite their overall embrace of liberal views, today’s freshmen are more likely to support restrictions on free speech — a trend that has led to controversial student movements to disinvite commencement speakers, disrupt presentations by those with unpopular views and demand “trigger warnings” before uttering potentially uncomfortable speech.

Support for banning racist and sexist speech on campus reached 70.9 percent in 2015, up from 58.9 percent in 1992. And 43 percent of those surveyed said colleges should have the right to ban extreme speakers, up from 25 percent in 1971.

Eagan said he understood student concerns that derogatory speech could lead to violence or harm students. “At the same time, institutions need to make sure we aren’t insulating students from ideas that may be counter to their narratives,” he said.

The proportion of students who did not affiliate with a religion grew to 29.5 percent, an all-time high since the survey began. Freshmen also continued to report that they studied more and partied less in their last year of high school than previous classes.

For the first time, the survey asked students about their sexual orientation and gender identity and found that those who described themselves as bisexual, gay, lesbian, queer or “other” more frequently felt depressed and overwhelmed than the 93.2 percent of students who said they were heterosexual.

The survey also asked questions about financial aid for the first time.

It found that more than a quarter of freshmen received a federal Pell Grant — an annual award of up to $5,775 for low-income students — and they were disproportionately Latino and African-American. Those students worried far more than others about their ability to pay for college and had to scramble more to take out loans, find work-study jobs and seek other ways to foot their educational bills.

The UCLA institute plans to release another analysis in June that will provide more detail about how college freshmen have changed over the 50 years of the surveys.