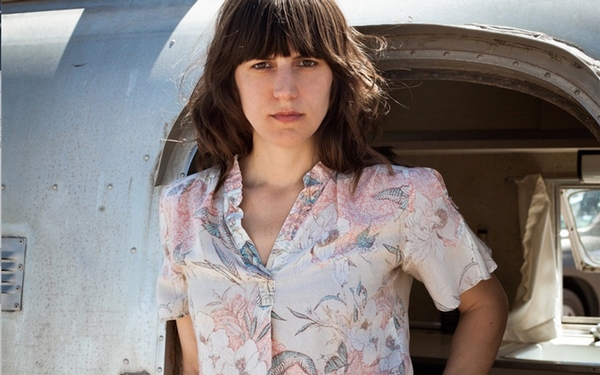 Eleanor Friedberger’s songs evoke more than reveal. The melodies stick in your head for days, and the riddles and questions they pose can linger even longer. Take the opening track of her latest album, “New View” (Frenchkiss): “He Didn’t Mention His Mother.” The information provided in the song title isn’t mentioned in the lyrics, as if it occurred to the narrator only in retrospect about why a relationship didn’t jell.

So why didn’t he mention his mother?

“Do you really want me to tell you?” Friedberger responds. “He didn’t mention his mother because his mother was dead. I didn’t know that. It was different for me to talk to someone that many times, and not have them blame their mother for something.”

The singer’s three solo albums are not only loaded with lyrics worth pondering, but hooks steeped in the classic-rock era. While growing up in Oak Park, Ill., Friedberger used to stock up on ‘60s and ‘70s albums at local record shops. Though celebrated in indie-rock circles for her adventurous, tongue-twisting work with brother Matthew in Fiery Furnaces, Friedberger indulges her love for relatively obscure ‘70s gems such as the pre-Stevie Nicks Fleetwood Mac’s “Sands of Time” on her solo recordings.

On “New View,” the woozy, neo-psychedelic “Does Turquoise Work?” turns “Alice In Wonderland”-style topsy-turvy lyrics into something unexpectedly majestic and moving.

“A complete idiot was Lord for an hour / There was crystal deception at the disappointing picnic,” she sings.

It sounds surreal, and yet somehow relatable. For at least one listener, those lines distilled the 2016 presidential campaign to a handful of words. Friedberger, of course, had her own ideas about lyrics that came to her in a one-hour rush of inspiration.

“That’s a mishmash of a bunch of different things,” she says. “The first couple lines were things I heard people say. One of the lines is from a friend’s art show. On the first album, I had a song called ‘Scenes from Bensonhurst’ about the paranoia that comes from social media, and that song is kind of an extension of that.”

Songs rule in Friedberger’s world. But the approach is different now that she’s on her own. With Fiery Furnaces, Matthew Friedberger called most of the shots in terms of arrangements and production, while Eleanor developed into a versatile vocalist. The band made elaborate studio recordings, then had to relearn the songs and often present them in more circumscribed arrangements when touring.

With Fiery Furnaces “one song could have five different melodies, but my songs might just have one,” she says. “It was just the two of us in the band for the most part, and it makes sense for a band to have a lot of ideas and do a lot. On my own, I’m following the tradition of music I like the most, which happens to be ‘70s singer-songwriter stuff. I’m just basically representing that.”

It’s sometimes inferred that she recorded her first solo album, “Last Summer” in 2011, because she needed to break off creatively after recording eight Fiery Furnaces albums in six years, but Friedberger says it’s not that simple.

“It’s complicated to talk about, but my brother would always ask for me to contribute more (to Fiery Furnaces),” she says. “But I don’t know if I had been, would he have allowed me? It’s hard to figure out how else it would work. He’d always ask (for her input). The last thing I want to present to the world is that he was holding me back and I had all this stuff piled up. That wasn’t the case. I don’t know if I wasn’t contributing because I wasn’t comfortable, but I couldn’t be doing what I’m doing now without that experience. I wasn’t fighting that. It was just the way it worked.

“By the time I made my first solo record, it was somewhere between an accident and an experiment. It wasn’t like I had a backlog (of songs). It was more if I don’t do this now, I never will, and it was fun. I had a job with my brother for a decade — that’s a long time for any job.”

Does she see herself working with Matthew again? “It would be hard not to,” she says. But she’s enjoying her increasing confidence as a songwriter and musician on her own. In addition to recording her own albums, she has performed and written music as part of the house band for the “Late Night with Seth Meyers” talk show on NBC and scored films for the Andy Warhol Museum in Pittsburgh. She’s also developed some new muscles as a vocalist, expanding her range in both lower and higher registers on “New View.”

“That’s the biggest thing I noticed about my singing, and I’m grateful,” she says. “It’s made me wish I could go back and sing old Fiery Furnaces records again. I feel like I’m still learning.”

Interviews
Searching for hope? Kacey Musgraves’ ‘Rainbow’ is a psalm, and balm, for the pandemic era
610 views

Interviews
You might think, ‘Who asked Dashboard Confessional to come back?’ Chris Carrabba has some answers
637 views

Interviews
Billie Eilish isn’t stressing over the Grammys. She’s busy worrying about the end of the world
1,137 views