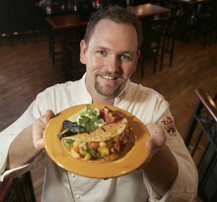 Most often, tacos are a familiar mix of meat, sauce and veggies – straightforward trios of complementary flavors clothed in warm tortillas.

But once a year, many Orange County, Calif., chefs gather to turn a taco-themed charity fundraiser into an opportunity to create concoctions that are, well, wild and crazy.

Off the beaten culinary path, these “tacos” can be filled with alligator, or octopus, or even smoked duck. Tacos with antelope filling, or overflowing with smoked snapping turtle. Frog leg chile verde tacos with artichoke salsa, accompanied by Cabernet-braised onions and a tequila sorbet.

“It's a great gesture for chefs to step out of their kitchens because we are so busy. The thing is it's a great cause, and we have a great time. We chefs are so happy to see one another. We talk about our lives and joke around and mingle with the guests,” says Brazier.

Chris Garnier, executive chef at Roy's Newport Beach and participant in the event for several years, says things can get pretty intense once it's under way.

“It's crazy, that's what it is,” says Honolulu-born Garnier with a heartfelt giggle, suggesting that lofty culinary ambition can sometimes add to the wackiness of the event.

“This year I think I'll make a really good beef stew with a hint of chipotle (chili), maybe garnished with crisp little taro strips and an edamame (soybean) and corn relish. Or, maybe I'll make some kind of wicked sushi roll.”

Tom Small, executive chef at TAPS Fish House & Brewery in Brea, Calif., will be participating for the first time this year.

“I've never made a wild-and-crazy taco before, at least not on purpose,” Small jokes. “I want to do something unique, but not out of the ballpark.

“So I chose [to use] Mano de Leon scallops. The name translates as ‘hand of the lion.' The shell looks like a lion's paw. It's a medium-sized scallop from the Gulf of California that is just starting to get popular. It's delicious, with a taste much like an Eastern scallop but with a little more sweetness, with a texture that is a little firmer. It's the right scallop for tacos.”

Small says he will marinate the scallops for 30 minutes “ al pastor-style ,” in a mixture of pineapple juice, garlic, fresh oregano and achiotepaste (achiote is a seed from the annatto tree that is ground into a paste and often used in East Indian and Latin American dishes).

“I'll sear them off, giving them a nice caramelization, put them in grilled tortillas that have been brushed with a little chili oil, then add some salsa, a guajillo chili (deep rust-red dried chili with complex flavor) and cherimoya salsa,” he says.

Mmmm. Cherimoya is a luscious tropical fruit that tastes like a combination of banana, pineapple and papaya. It should be delectable teamed with the subtle spiciness of those chilies and scallops.

When asked what makes tacos so universally adored, Small says he thinks it has something to do with the contrasts between hot and cold components, the play between ingredients that are soft and those that crunch.

“Plus, people love to eat with their hands,” he says. “Each bite offers different tastes and fun, right down to that last bite, which is often just tortilla and salsa. And that's great.”

Bless those big-hearted chefs. Wild and wacky, fun and generous, too.