Hot Property: Galecki is going out with a bang 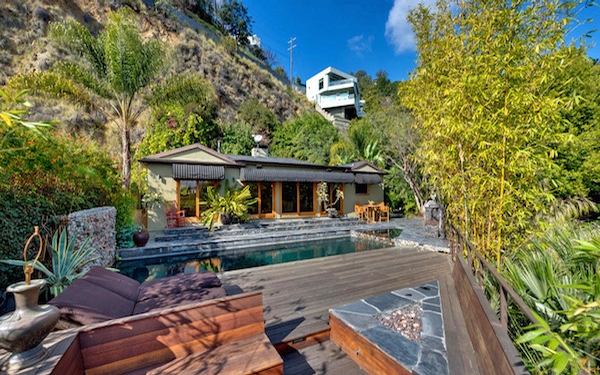 Johnny Galecki has put his home up for sale at $1.995 million. (Shooting LA)

LOS ANGELES — It’s in with the new and out with a bang for Johnny Galecki.

“The Big Bang Theory” star, who bought a pedigreed home from action film star Jason Statham last year, has put his old house in Hollywood Hills West on the market for $1.995 million.

The 1950s bungalow sits on more than a third of an acre with a swimming pool and spa, a fire pit and a garage/studio with a glass door. It is surrounded by mature palms and bamboo.

The roughly 1,700 square feet of space, with gallery walls and hardwood floors, includes a dining area, a living room with a fireplace and a modern kitchen with white cabinetry. A row of glass doors brings the outdoors inside.

Other living areas include a media room and a master suite with a soaking tub and a walk-in closet. There are two bedrooms and two bathrooms in all.

Galecki bought the house from actor Patrick Dempsey more than a decade ago for $982,500, records show.

He will appear in the upcoming films “Rings” and “The Master Cleanse.”

Oprah Winfrey has been on a roll lately.

In December, the media mogul scored a high-tech ski home in Telluride, Colo. Now she’s expanded her foothold in Southern California, buying an equestrian property in Montecito at auction for $28.85 million.

The roughly 23-acre estate known as Seamair Farm was put up for auction in November, with Marty Rogers of Sage Auctions and Dan Encell of Berkshire Hathaway HomeServices handling the sale, and closed escrow this month.

Before the sale, it had been owned by members of the Spencer T. Olin industrialist family for close to four decades.

Accessed by a private drive, the estate centers on a main house designed by noted architect Cliff May. The ranch-style home has four bedrooms, 4.5 bathrooms and four fireplaces in 4,750 square feet of space.

A manager’s cottage, a horse trainer’s house, a stable and barn, riding rings, paddocks and irrigated pastures make up the pastoral grounds. Tall palms and citrus orchards surround the property.

Panoramic views take in the Santa Ynez Mountains, San Ysidro Creek and the Pacific Ocean. A dedicated preserve of 44 acres borders the eastern part of the property.

Winfrey, who turned 62 last month, has a sizable real estate portfolio that includes other properties in Montecito, Chicago, Hawaii and Tennessee.

The billionaire hosted “The Oprah Winfrey Show” from 1986 to 2011. She is president of Harpo Productions, a media and entertainment company she founded in 1986.

CUTTING HIS TIES IN LOS FELIZ

Actor Michael C. Hall of “Dexter” fame is taking another stab at selling his home in Los Angeles. He has put the Spanish Colonial Revival-style compound in Los Feliz up for sale at $4.85 million — up $350,000 from when he had it on the market two years ago.

Set behind gates and tall privacy hedges, the updated 1920s home sits on more than a third of an acre with a guesthouse and a swimming pool.

A foyer, a den with built-in bookshelves and a center-island kitchen, six bedrooms and six bathrooms are within the 5,618 square feet of space. The den and the living room each have a fireplace.

Topped by open beams, the master suite has large picture windows and a refreshed bathroom with a soaking tub and glass-enclosed shower.

Hall bought the house three years ago for $3.825 million.

The Beverly Hills estate where Oscar-winning actor Charlton Heston made his home for nearly half a century has sold for $12.212 million.

Set behind gates on a knoll above Coldwater Canyon, the 3-acre property centers on a Midcentury Modern-style house designed by renowned architect William S. Beckett and built in 1959. A separate three-story structure with an art studio, a screening room and an observation deck is also within the grounds.

The main house includes an open-plan living room, an office with a balcony, a formal dining room done in terrazzo tile and a marble bar. Two bathrooms, two walk-in closets, an office, a fireplace and a two-story library highlight the master suite.

Nearly every room has views of surrounding treetops and mountains.

Within the nearly 9,700 square feet of living space are a total of five bedrooms and six bathrooms plus staff quarters.

A swimming pool, a tennis pavilion with a two-story viewing deck, mature landscaping and a meditation area complete the grounds.

Heston, who died in 2008 at 84, moved into the residence after its completion. It had been owned by the Heston family since.