In a film-obsessed town, you can find your Cinefamily 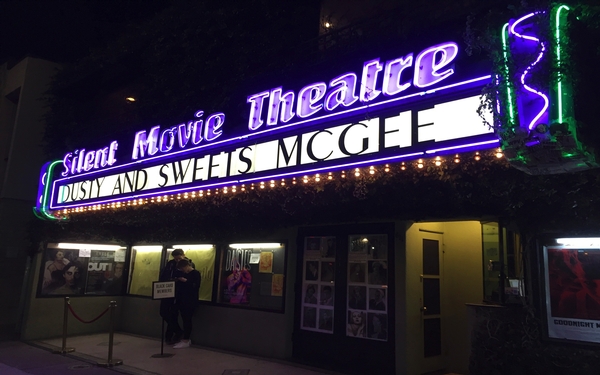 LOS ANGELES — This city adores the movies — excuse me, the cinema — absolutely reveres the art form, worships the craft to near fetishistic levels. No surprise, since it is a company town, home to studios big and small, theaters seemingly outnumbering those other places of worship: churches.

Given this milieu, it’s also no surprise that revival and repertory theaters flourish here at a time when, in much of the country, vintage films are only streamed in the comfort of your living room. Art-house staples such as the New Beverly Cinema, American Cinematheque at the Egyptian and the Aero, the UCLA Film and Television Archive, and the Nuart curate classic, cultish and curiously idiosyncratic offerings to audiences with a deep sense of history and equal amounts whimsy.

But you haven’t truly experienced Los Angeles’ celluloid culture — digital be damned; we’re talking primo 35mm prints — until you spend a night at the Cinefamily at the Silent Movie Theatre in the Fairfax District.

Since 2007, a group of film buffs, some of the periphery of the industry, has turned L.A.’s erstwhile lone silent movie house into a tabernacle of talkies with offerings even movie mensch Peter Bogdanovich wouldn’t recognize. Willfully obscure (anyone familiar with “Jeanne Dielman, 23 Quai du Commerce-1080 Bruxelles”?) at times, quirkily nostalgic (Bogey & Bacall in “Dark Passage”) at others, and campily creepy (“Blue Sunshine”) on weekends, the Cinefamily offerings may entertain you, mystify you, occasionally infuriate and disgust you, but these flicks are like nothing you’ll ever experience either in a chain theater or at home with a Redbox selection.

It’s more than just a revival house; it incorporates films into broader entertainment. About once a month, a program called “Doug Bensen’s Interruption” takes a cheesy movie — December’s offering: “Kirk Cameron’s Saving Christmas” — and has comedians and actors (Sarah Silverman and Zach Galifianakis, for example) sit on the couches in the first few rows, microphones in hand, providing snarky commentary, a la “Mystery Science Theater 3000.” Cinefamily plays vintage Saturday morning cartoons on, well, Saturday mornings, hews to its roots with a Saturday night silent movie, and often presents curated compilations, such as “The Comedians: Drunks, Thieves, Scoundrels and the History of American Comedy,” hosted by author Kliph Nesteroff.

Even if you don’t consider yourself a cinephile, even if your idea of edgy is the oeuvre of Garry Marshall, you’ll feel smarter and hipper hanging out with these cool kids.

If possible, try to schedule your SoCal trip to coincide with Cinefamily’s monthly “A Band and a Movie” night, in which a musician pairs a movie that best encapsulates the aesthetic of her or his music. After the showing, the crowd repairs to the back patio for a short set by the musician. In late December, for example, drone metal artist Dylan Carlson picked Sam Peckinpah’s bloody “Bring Me the Head of Alfredo Garcia.”

The night I attended, Bay Area singer-songwriter Cass McCombs chose a quintessential California drug movie, “Dusty and Sweets McGee” (1971, directed by Floyd Mutrux), preceded by a short called “Sean,” a 16mm documentary about a boy raised in Haight-Ashbury in 1969. I was not familiar with either flick, but when I saw the line stretched along Fairfax Avenue — not exactly “Star Wars”-long, but significant — I decided to check it out.

I fell into line behind a late-20s-something couple, Jordan Londe and Caitlin Geiger, card-carrying Cinefamily members. They’re both “in the business” — Londe works “in commercials” and Geiger “in fashion” — and both are admitted cineastes.

“I moved here 7 years ago, and I found myself not really liking L.A.,” Londe said. “I was from the Midwest and so it wasn’t until six months in that somebody recommended I come here. Something shifted for me. I found a group of people I like. It very much is a Cinefamily. I’m not joking. The cool thing is the aesthetic diversity. You find other theaters in town, but they have a very specific theme to their program. But this one kind of does it all. It’s all over the map.”

An added attraction for Geiger: “There’s the history of the place. Do you know the history?”

I reeled off what I’d read on Cinefamily’s website, how this was a silent movie house started in 1942 and run, on and off, until the early 2000s before a consortium of movie types — led by Hadrian Belove, a writer and owner of the erstwhile Cinefile Video store — got together and turned it into a repertory house.

“No, I mean the murder,” Geiger said.

Subsequent Googling turned up the story: In 1997, Lawrence Austin, the owner of the Silent Movie Theatre (which then stuck true to its name, refusing to play talkies), was killed in a murder-for-hire scheme by the theater’s projectionist, who paid an assassin/moviegoer $25,000 to off his boss/lover for the insurance money. The trigger man, Christian Rodriguez, and the projectionist, James Van Sickle, both were convicted of murder in 1999.

“But the really interesting part,” Geiger added, “was that there was a live organist playing and the man playing it was deaf and didn’t realize somebody had been shot. So he just kept playing the organ during the whole thing.”

The interior of the 180-seat theater is noir chic. It’s dark and slightly dank, with framed photos of silent-screen icons (from Fatty Arbuckle to Clara Bow) lining the walls. The velvet-backed seats clearly have seen better days, but early birds willing to pay slightly extra can lounge on the couches in the first few rows. A DJ is camped in the far left front of the stage to provide pre-movie entertainment, but most of the crowd hovers in the narrow lobby, getting caffeinated and talking movies under framed posters of John Cassavetes and Buddy Rogers.

Everyone’s a critic here, or so it seemed. I overheard a confab about the plot ambiguities of “Eraserhead” and how it presaged the psycho-sexual pathology in “Blue Velvet.” But then I ran into Steven Gonzalez. He was no cinephile, thank goodness.

“I just think this place is cool because they have all these strange movies,” he said. “One time I came, they showed a documentary about some religious cult. They showed infomercials from the cult from ’70s TV. Craziest stuff you’ll ever see.”

As is customary before viewings, Cinefamily staff took the stage to introduce the films. When one of the MCs said they had acquired the “original Warner Brothers 35mm color print” of “Dusty,” the crowd actually cheered. The other MC piped up, “I don’t know about you, but I’m more and more into seeing as many 35mm as I can.”

The audience then was told that “Dusty” was a portrait of L.A., circa 1970, and one of the first films to blend documentary and fiction (the heroin addicts depicted are real addicts, but the drug dealers were actors).

“Notice,” the first MC added, “that this was one of the first movies to be loaded with pop tunes. Pretty much all the characters are listening to the same radio station, playing oldies. I’m not sure, but it feels as if ‘American Graffiti’ might have been inspired by this.”

That may be the only, tenuous link with George Lucas’ sentimental tale. “Dusty” was a hazy, barely linear, mostly plotless tale of addicts and dealers, lots of vein-popping action, even more lying around in a narcotized daze. Its cinematography did, indeed, capture the languidity of ’70s Los Angeles, but, an hour in, the audience seemed a tad restless.

But they had the upcoming set from McCombs to lift their spirits. And the next night, these Cinefamily cinephiles could look forward to actor-director Rob Schrab’s “Found Crap,” an event hosted by the “Sarah Silverman Show” veteran who curates a “mashup of god-awful movies.”

Knowing this town, Schrab will have lots of material from which to choose for many years to come.

CINEFAMILY AT THE SILENT MOVIE THEATRE