Embrace of the Serpent: with brimming beauty, the Amazon speaks back 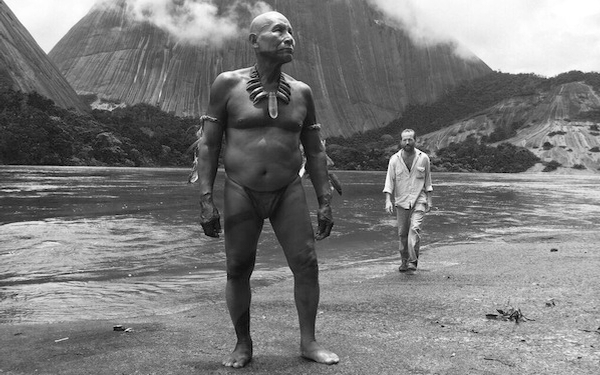 It’s pretty safe to assume that we—the collective we—like to believe we know something about our culture, our past. Countless history lessons, blackboards riddled with the concepts of peoples and places that now are reduced to the chalk with which they are described have all been deemed enough by some unwarranted standard. Writer/director Ciro Guerro found that standard an unacceptable truth after a lifetime of having little understanding of his own Colombian heritage—a heritage that was quickly, almost wordlessly wiped out due to its apparent otherness and its valuable resources that were simply irresistible to the rising capitalist world. His film, Embrace of the Serpent is an attempt at remedying that willful ignorance, and does so with a sometimes-shocking amount of grace and uncomfortable self-reflection to make us all believe we are clueing into an identity we had no idea existed.

With taking on this project, Guerro and his crew found themselves in some wildly uncharted territories, both geographically and thematically. Constructing the narrative around the journals of two ethnographers from two different periods of the 20th century, Theo Koch-Grünberg and Richard Evans Schultes, we might think that this is the tale of unlocking a new culture or traditions of the Colombian Amazon as told by two white men. But you’d be wrong, because that is a story already told, and Guerro wanted none of that. And so he gives us Karamakate.

Both white men encounter Karamakate at vastly different stages of his life and thus we witness that remarkable evolution of a solitary man on his land. Theo (Jan Bijvoet), after developing a severe illness on his journey, and traveling with his loyal companion Manduca (Yauenkü Miguee), comes upon young Karamakate (Nilbio Torres) on the banks of the Amazon as a shaman with little trust of the white man and especially the native who would seemingly blindly follow him. It quickly becomes apparent that the disease will surely kill Theo if Karamakate does not take them to a nearly extinct plant called yakruna, so when Theo proves himself worth saving, having been connected to Karamakate’s own dreams, the shaman reluctantly agrees, and the hunt begins.

By splitting up the narrative between the adventures of Theo, an explorer who spent much time with the indigenous people of Colombia’s Amazon, and Evan (Brionne Davis) the man who Theo’s journal would inspire decades later to return to the same jungle in hopes of finding yakruna himself, we also come to know Karamakate as the constant presence linking the two. When we see Evan canoeing into the jungle and encountering an older and resigned Karamakate (Antonio Bolívar Salvador), our consciousness and perspectives start to pan from that of the explorers to that of the men who breathe the stars, who dig their toes into these lands as their own source of being, and its here when Guerro’s story grows into something equally mesmerizing and haunting.

As Guerro guides us through the Amazon and as the horrors of colonialism and greed make themselves known, Embrace of the Serpent wields a sort of speculative nostalgia for many past systems of life that have since been wiped out or forgotten, and we get to see this theme in a variety of forms. Whether it’s Old Karamakate who has seemingly removed himself from the traditions of his shaman practice, having grown to question his very power of transcendence, or Manduca who has chosen to join the Western world rather than be buried along with the rest of his people, each character has to question whether or not their history is something worth moving on from or embracing as an integral part of their spirit.

But then, that whole concept is turned on its head as it quickly becomes apparent, through Guerro’s impeccable storytelling devices, that time isn’t relevant. The trajectories of Young and Old Karamakate, as well as Theo and Evan trying to find physical evidence of a plant that is supposedly nonexistent, both become illusory structures of a single journey that occurs within one central realm of focus. The idea that it happens to be experienced by many men over many decades is just a skeleton of fact that has little to do with the connection and magic of the land that brought them all together.

Oh yes, please let’s talk more about that land that is so unforgettably captured by cinematographer David Gallego. With sweeping landscapes and claustrophobic tree lines, Gallego managed to create a scope of black and white imagery that bathes in such rich enigmatic quality that it carries its citizens on the precarious brink of knowledge and destruction, insanity and transcendence. The first narrative fiction film to be shot in the Colombian Amazon in nearly three decades, in a region called Vaupés, and hiring local indigenous people to be a part of their own story, that sense of visceral precariousness mixed with Guerro’s idea of wholeness culminates into a world that rests on a delicate balance of themes and practice.

THE EMBRACE OF THE SERPENT is in theaters now!