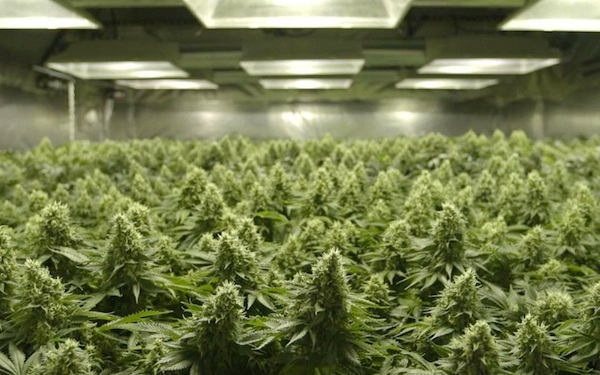 Just when you thought print journalism was dead—ahem—one paper decided that it was just a matter of adapting to the times and whatever the kids are up to these days to get sales back up. And what are we up to, you might be asking if you’re of a little out of the loop? Weed, that’s what, and there’s a booming market out there right now that is beginning to sustain itself in the eyes of the sometimes reluctant economy that it finds itself in. So, naturally, the next step was to start considering it in writing as a legitimate aspect of our daily lives, just as much as sports and weather, and that’s what the latest laid back documentary Rolling Papers is all about... and not too much more than that.

As it begins, director Mitch Dickman introduces us to the first man to be deemed a weed editor, and that is Ricardo Baca of The Denver Post. Serving as both a music critic and the Entertainment Editor for The Post for over a decade, Baca was the guy that seemed the most fit to tap into this excitingly legal, semi-taboo world of the weed business in Colorado. And so, he began The Cannabist, a matter-of-fact pot culture site that gives, just like any other news source, an investigative look at various happenings in that particular corner of the world.

While attracting celebrities like Whoopi Goldberg to contribute posts helps sustain and validate the columns’ cause, it really falls in the hands of the various pot critics, photographers, and investigative reporters that Baca employs to keep the allure of this new journalistic approach alive.

And so, Dickman’s documentary explores those very people who aim to breathe new and hopefully exciting life into the precarious waters of the print newsland in anyway they can. Unfortunately, while this new and novel turn of the tides is something to be documented, Dickman’s Rolling Papers doesn’t seem to trudge through the muck and the mire enough to reach any sort of rich conclusions.

Yes, we do get to see a lot of pot critics get to go smoke weed and write about it—which is pretty titillating—but we don’t get to see any reaction or consequence, private or public, of such groundbreaking subject matter. In the peripherals we hear of people buying more newspapers when there’s an interesting weed topic on the cover, or Whoopi rescinding her outward support for The Cannabist when her motives are questioned, but we never hear from opponents of this new journalistic endeavor directly, and that takes a big blow on the impact of Rolling Papers.

There is one particular personal tale that does become a prominent voice within the somewhat one-note perspective of Dickman’s documentary, and that’s of one of the pot critics that Baca hires who also happens to be a mother of a two-year-old. From her testimonies we begin to understand what the trials are for a woman who also wants to enjoy the perks of weed, something the rest of the state gets to indulge in without many repercussions. Because of her status as a mother, however, and despite carrying a medical card, smoking weed in her son’s vicinity becomes a matter that could potentially involve Child Protective Services. Now, whether or not you agree that a mother should be able to toke up in the privacy of her own home is not exactly what’s important here, but it does put into question the exact kinds of debates weed journalism can and should stir up and tackle if the momentum is strong enough. This is what progresses a new movement in the right direction: being able to discuss how we want new legislation to rule our personal lives.

Another interesting take on the weed criticism that Dickman explores, however too briefly, is the comparison of the American market to that of its international counterparts. Following Baca to Uruguay where the government is actively deregulating the weed business, as opposed to America attempting to regulate it, we get a clue how different cultures and economies view how weed can profitably impact their lives, rather than stubbornly reject it purely based on its initial taboo status. Once again, however, Baca leaves without seemingly too many conclusions about what our government or our public in general should set out to accomplish to keep the often-bullied business alive.

And so we have Rolling Papers, an interesting yet not entirely influential documentary about a lot of people’s favorite recreational drug. Whether or not you’re a pot-smoker, you may surely find some entertaining bits within Dickman’s story, but in the end, you’ll probably be underwhelmed by its lack of building momentum that may have got lost in the, you know, haze.

Rolling Papers opens at The Laemmle and other theaters this Friday, February 19th.