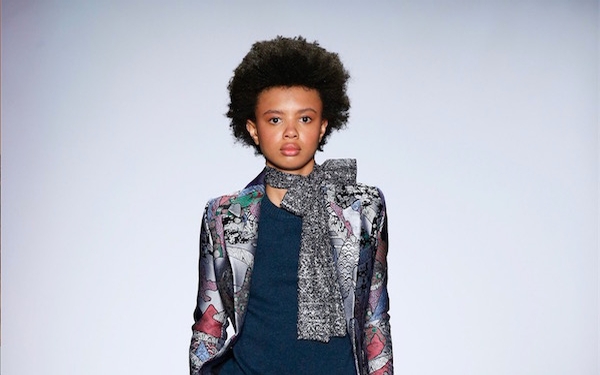 Shades of blue were popular hues in many fall 2016 collections, including looks by Vivienne Tam. (Dan Lecca)

NEW YORK — Another New York Fashion Week is in the books. While this biannual marathon of runway shows across the Big Apple is always a big deal, this one was a little extra special to me.

The fall/winter 2016 shows, which wrapped on Thursday, marked my 10th time covering New York Fashion Week (excluding a stint reporting on the inaugural Council of Fashion Designers of America men’s shows last summer, and hours upon hours spent organizing editors’ runway show invites in college as an intern for a Manhattan-based fashion magazine, back before most of the invitation process was digitized).

Over the years, I’ve been asked all sorts of questions about these experiences: What’s it like? How does it work? Do you get to dress up? Can people sneak in? (And the list goes on … )

Here’s what I’ve figured out along the way:

— Not for the faint of heart: If you’re not prepared for it, New York Fashion Week will kick your butt. Most days, shows span from morning to night, you’re on your feet (a lot!), and a meal is sometimes whatever you can find in your bag or grab on the go while dashing between shows. Plus, factor in whatever the weather is up to (90-plus degrees sometimes during the September shows, and the occasional blizzard, ice storm, wintry mix and below-freezing temperatures during the February Fashion Week). Lots of sleep isn’t a luxury, either. For journalists, nights and early mornings are spent writing, catching up on emails and responding to last-minute invitations.

The Fashion Week cold is a common thing. One season, mine turned into mononucleosis. I also developed severe tendinitis in my ankle from attempting to traipse around the city in cute heels. Lesson learned.

Now before I head to Fashion Week, I’m like a runner training for an actual marathon: I take lots of vitamins, try to stay hydrated and eat the right things, get plenty of sleep to build up my strength and break in comfortable shoes.

— Misunderstood: Sure, New York Fashion Week has its glamorous moments. I’ve seen some of the most spectacular views of the city from fashion shows atop five-star hotels and swanky Fifth Avenue penthouses. One time, I entered a room and there was singer Rod Stewart lounging on a couch chatting up guests. Another time, I almost rode in a golf cart through Central Park with supermodel Karlie Kloss. For a few seasons, my assigned seat was regularly a couple of rows behind Vogue editor Anna Wintour, so I started a collection of photos of her signature bob shot from behind. But for every chance to rub elbows with a celebrity or see the back of Wintour’s head, there are lots of less-glamorous moments. Fashion Week isn’t all parties and paparazzi. Most of the time, it’s work. (Not convinced? See above.)

— At times, political: Who gets in and sits where is serious business at New York Fashion Week. There’s lots of jockeying involved. For journalists, it’s about knowing the right people and trying to forge relationships with those you don’t know. As a reporter for a regional newspaper, it’s interesting to learn about how a brand measures the importance of a metro daily newspaper based on how it responds to me. (Thankfully, there still are several designers who view newspapers as valuable.)

Tips for rookies: If you can snag an end seat, take it (the sight lines are typically better). If you get stuck in the standing section, don’t fret it (if you maneuver your way to the front there’s a good chance you’ll get tapped to fill an empty seat). If you don’t get in at all, try again next time (the more you cover Fashion Week, the more it will open new opportunities with other shows in future seasons).

— A terrible place to use the restroom: At some venues, it’s just a trailer with skinny stalls and sticky floors, sometimes with an artificial flower bouquet or some fancy soap on the sink to try to make you feel like you’re back in that Fifth Avenue penthouse with the spectacular views (where you wish you would have used the restroom instead).

— Is unlike anything else: In spite of the long days, scarce food and less-than-ideal restroom accommodations, I would do it all again — and again and again. For me, New York Fashion Week is not only an opportunity to network and accumulate story ideas for the next six months, it’s inspiring. I’m always amazed by what designers come up with, from the clothes to the actual runway shows themselves.

I’m awestruck by someone like Tommy Hilfiger, who season after season comes up with creative sets and show concepts that are masterfully executed. Every minute detail is tended to, and it inspires me to strive for the same attention to detail in my line of work. Someone like Dennis Basso or Zang Toi produces collections and shows that are shining examples of pure glamour, no matter what the garments look like or who the models are. Those are reminders that beauty comes in all shapes, colors and sizes.

When Betsey Johnson or Libertine holds a runway show, models usually end up dancing down the runway. It’s hard to not have a smile on your face. You forget about that smashed granola bar from the pits of your purse that you called lunch. Shows like these are just plain fun. Isn’t that what we all need to make a little more time for?