These Stanford graduates want to help you run a YouTube empire 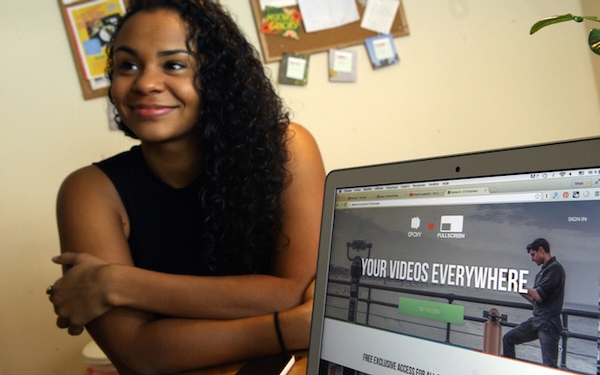 Millennial travel vlogger Jo Franco rests next to her computer which, features the site for Epoxy, at her apartment on Jan. 26, 2016 in Koreatown in Los Angeles.

LOS ANGELES — Aspiring stars in Los Angeles used to measure success by the number of parts or auditions they snared.

Travel video-bloggers Damon Dominique and Joanna Franco do it by brewing a pot of coffee in the morning, opening their laptops and counting the number of new comments, mentions and likes they tallied.

The duo, known online as Damon and Jo, have attracted advertisers by amassing more than 210,000 subscribers on YouTube. That’s enough of a following to hopefully never have to walk dogs or deliver groceries again.

But maintaining that momentum won’t be easy. It takes a relentless pace of new content and round-the-clock tending of fans on social media.

“When you get to a certain level it’s impossible to see every YouTube comment,” said Franco, a 23-year-old native of Rio de Janeiro who grew up in Connecticut and moved to LA last summer. “It’s easy to say, ‘I’m overwhelmed.’”

Without the means to hire a team of publicists, agents and assistants, Dominique and Franco turned to software developed by a LA startup called Epoxy to maximize their digital influence. The company’s tools bolster the art and science of Internet fame, giving so-called content creators, in the parlance of the digital video world, a badly needed edge at a time when competition is fierce.

“I don’t have to have 7,000 tabs open anymore,” said Dominique, a 24-year-old native of Fort Wayne, Ind., who became close friends with Franco at Pace University in New York.

Settings can also be toggled so that the pair are notified any time someone with a big social media following gives them a shout-out — a golden opportunity to reach a wider audience with a simple reply.

The emergence of companies like Epoxy underscores the breadth and sophistication of today’s YouTube and online video ecosystem, which only recently was dismissed as a compendium of cat videos rather than an alternative to traditional entertainment.

There are now 165,000 YouTube creators around the world with followings of at least 10,000 subscribers, according to Tubular Labs, a Mountain View, Calif., digital video analytics company.

Those at the top of the heap, such as Lilly Singh, Tyler Oakley and PewDiePie, command millions of dollars in endorsements and brand campaigns.

“It’s a more crowded environment,” said Allison Stern, co-founder of Tubular Labs, which offers creators free software to chart their influence. “I do think it’s definitely harder to become a star today than before.”

Creators compete with one another for eyeballs and brand campaigns. Advertisers look for the top influencers in targeted markets.

That gave rise to an industry connecting advertisers to creators led by startups such as Zefr, Famebit and OpenSlate.

Although Epoxy also wants to help the most established creators maintain their social media empires, it largely helps up-and-comers find their footing.

The company was co-founded in 2012 by Stanford graduates Juan Bruce and Jason Ahmad, who both have backgrounds in design and engineering.

The idea came when Bruce served as head of digital at Team Downey, a production company founded by actor Robert Downey Jr. and his wife, Susan.

Team Downey was making a Web series and asked Bruce and Ahmad to research why some online videos prospered while others didn’t regardless of production value. Bruce and Ahmad interviewed top YouTubers like Jenna Marbles and Hannah Hart, ad agencies, Hollywood studios and multi-channel networks that were representing the biggest digital stars.

Using the Downey name helped open doors for the soon-to-be founders. When they were done, they were surprised by what they discovered.

“Winning in online video very often didn’t have anything to do with the video itself,” said Ahmad, now Epoxy’s chief product officer. “It actually had more to do with all the activity surrounding community building.”

The way beauty vlogging star Michelle Phan explained it to them, you have to build an audience first by promoting a new video on Twitter, Facebook and Instagram before you can expect to rack up views on YouTube and elsewhere.

“All these different networks support each other. They’re not the islands people had traditionally thought they were,” Ahmad said.

Bruce and Ahmad started building Epoxy while at Team Downey and spun it out when they realized that there was demand for the software across the online video industry.

Mark Suster, managing partner at Upfront Ventures, said Epoxy wasn’t a short-term bet. The rise of Netflix, Hulu, YouTube and HBO’s streaming service signaled the end of a stranglehold on distribution by a handful of powerful media companies. That will eventually lead to a surge in demand for more content and the people needed to make it, he said.

“We believe by capturing the most elusive part of the market — the creators — we become infinitely more valuable to distributors who want access to talent,” Suster said.

When Epoxy officially released its publishing platform in May 2014, it included an editing tool to tailor video for the different social networks, a scheduling feature so that content could be posted strategically and a system to sort social media interactions so that creators could quickly respond.

The company released a mobile version of its software in September and recently released a feature where, instead of replying to posts in text, users can do it with a short video clip.

The company charges between $19 and $109 a month for access depending on the level of service desired. About 60 multi-channel networks, including Fullscreen, Maker Studios and AwesomenessTV, have purchased bulk subscriptions to Epoxy.

Bruce declined to say whether the company was profitable and it’s unclear how many creators are using the software. The company will say only that its clients collectively capture about 6 billion views on YouTube each month. For comparison, Maker, a Disney-owned multi-channel network with stars such as PewDiePie, attracts 10 billion views each month.

For creators, many of those views are hard-won.

“It’s a really hard, exhausting, fragmented life,” said Bruce, Epoxy’s chief executive. “But on the plus side for us, if you can solve for that, you can win loyal users.”