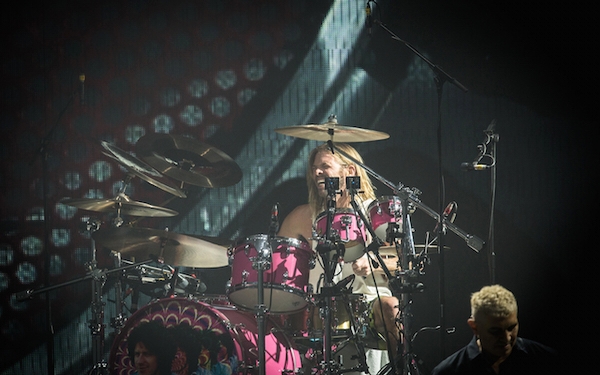 According to Hawkins, these are the rules:

1. Pick some songs you know.

3. Don’t be afraid to shuffle the set list around: Two fast songs followed by a medium-tempo song will usually work.

4. Don’t worry about playing slow ones. There will be no slow ones. “We’re not good enough to play Journey or anything like that,” Hawkins says wistfully.

5. Special guests are something everyone can enjoy (Hawkins: “I’ll let anybody up”). Past examples include Hawkins’ boss Dave Grohl, Motley Crue’s Nikki Sixx (this happened one time, and was a highlight of Hawkins’ career) and “the guy from Ratt.”

6. If a gig is going poorly, there is nothing to be done, no messiah, no one surefire, crowd-pleasing song that will save you. Let it happen.

Hawkins, 44, is a drummer of formidable skill, but he’s also an unjaded Everybro. He formed Chevy Metal to fight the boredom and erosion of musical discipline brought on by Foo Fighters down time, and because he wanted to play James Gang covers with his friends. He divides his life between his superstar rock band and the pressure-free existence of his other rock band. He is doing what you would do with your life, if somebody let you do it. “I need to find another hobby,” Hawkins protests. “I could use a life, trust me.”

Hawkins belonged to a few cover bands in high school in Laguna Beach, Calif. They would play school dances, and the weddings of the less discerning. “Those were fun,” Hawkins says. “That’s fun. When we go do those kinds of shows, it kind of transcends you back to that frame of mind, which is a very simple way to enjoy music, remembering the old songs you love, getting together with your bros. There’s no real high tension. No one’s life depends on this.”

He joined the Foo Fighters in 1997, a few years after they first formed. “When we were younger, when we were first trying make our mark for real on the first three records, it was intense,” Hawkins recalls. Participation in outside bands was frowned upon: When Grohl joined Queens of the Stone Age in the early ‘00s, it sent fear into the hearts of those in the Foos camp. “When you would do anything different, people would get uptight,” Hawkins says. “I remember when Dave was doing Queens, everyone was really uptight. They were like, ‘Oh no, he’s in that band right now.’”

Chevy Metal began as a reaction to, and an escape from, the Foos’ pressure-cooker existence. “I started Chevy Metal because I needed to stay in shape,” Hawkins says. “I needed to kind of lightly think about music, because the Foos had gotten really heavy at that point. We were trying to make this record, and it was really hard. We just weren’t doing what we wanted to do, and everyone scattered. Chevy Metal became kind of a musical gym, somewhere I could stay in shape and enjoy music on a high school level.”

The Foos play arenas and large-scale European festivals. Chevy Metal plays clubs, a lot of charity gigs and the kind of local events that involve tractor pulls. Grohl sometimes appears alongside them onstage, and he guested on the self-titled 2014 debut from the Birds of Satan, which is Chevy Metal reconstituted as a prog-flavored rock band performing original material.

If Hawkins minds being upstaged by his superstar boss during his own gigs, he betrays no sign of it: The Foo Fighters seem to be the rare band that actually enjoys one another’s company. “If we do a Foo Fighters record, we work off and on for six months, from inception to final recording. Sometimes it takes a year to do one, but that’s not (working) every day,” Hawkins says. “There’s a lot of time to do other stuff. The more you do, especially if it’s a good, positive experience, you come back and you bring that zest back to the Foo Fighters, which is the mother ship for all of us. (We’re) always doing stuff on the side, and that’s fine. You should.”