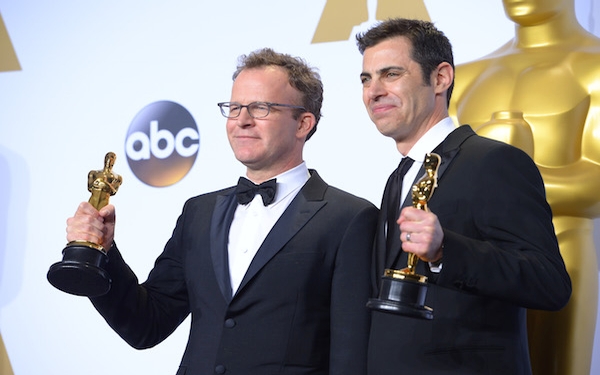 As he walked briskly out of the Dolby Theatre on Sunday night, his screenwriting Oscar in hand, “Spotlight” filmmaker Tom McCarthy slowed down a moment as a reporter sidled up to talk about the season that had just ended.

Wouldn’t it be a relief, after all these months of extolling journalism, to get a break from the ink-stained wretches?

“I gave you guys a shout-out!” he said playfully, referring to a comment he made about journalists during his screenplay acceptance speech. “I mean, you gotta take care of everyone,” he continued lightheartedly.

McCarthy has been taking care of a lot over an improbable 20-year career that’s included acting, writing studio movies and directing smaller independent films such as the best picture winner “Spotlight.”

Starting out around the age of 30 as a character actor in the mid-1990s, McCarthy segued into writing-directing with the Peter Dinklage-starring “The Station Agent” in 2003. What seemed like a promising if unsure beginning — he won the Spirit Award for first screenplay — would soon evolve into a finely calibrated arc.

McCarthy would continue acting, often in studio pictures such as “Meet the Parents” and “2012.” Those gigs, besides paying the bills, gave him an entree into Hollywood and writing; the writing jobs, which would themselves sometimes include more for-hire-ish studio pieces such as “Up” and “Million Dollar Arm,” in turn allowed his passion projects.

He would follow his filmmaking debut with 2007’s “The Visitor,” an immigration-themed story of solitude and otherness that hit a post-9/11 sweet spot and gained Richard Jenkins an Oscar nomination.

In 2011, McCarthy returned with “Win Win,” a seemingly simple story set in a small New Jersey town that somehow managed to encompass parent-child relationships, the Great Recession, high-school wrestling, masculinity and the legal system. (McCarthy grew up in New Jersey and sets most of his movies on the East Coast.)

His trajectory is unusual. The actor-director — or at least the actor-director who consistently finds work in both realms — is a rare enough breed in moviedom. To put together a dossier of acclaimed movies like “The Visitor,” “Win Win” and “Spotlight” is even less common.

Throughout, McCarthy’s work has been known for a kind of realism and humanism and the mixing of comedy with the dramatic. He has also proved himself to be an exacting director on set — patient but intense. On one day during production of “Win Win” witnessed by a reporter, a 15-second scene was shot and re-shot with the diligence of Steph Curry taking 300 practice jumpers.

If that has demanded a lot from those around him, it has also attracted the right kind of talent; Jenkins, Paul Giamatti, Mark Ruffalo and a host of actor’s actors have sought to work with him. Speaking to The Times last spring about the musician-turned-actor Cliff “Method Man” Smith, McCarthy gave a glimpse into his own mind-set on the subject of persistence.

“Cliff’s work ethic is great,” he said of Smith, whom he had worked with in the past. “And whether you’re a good rapper or not, you only become a famous rapper if you work hard.”

Mary Jane Skalski, a producer who has often collaborated with McCarthy, said in an email Monday that “Tom is endlessly curious, amazingly open and the smartest guy in the room who never has to be the smartest guy in the room. I’m not surprised he made a great movie about investigative journalists — he would have been a great investigative journalist.”

In interviews, McCarthy often displays insightful candor. Asked about his unvarnished depiction of a slack-jawed teenager in “Win Win,” he said, “The thing about people that age is they know everything that’s going on. They just don’t let you know they know what’s going on.”

Where his newfound “Spotlight” cachet takes him remains to be seen.

Cautionary tales of the Oscar-anointed abound, such as the story of the European director Florian von Donnersmarck, who in 2007 hit it big with his foreign-language Oscar winner “The Lives of Others,” and wound up next making a Hollywood star vehicle — “The Tourist” with Johnny Depp and Angelina Jolie. It was an infamous misfire.

Though McCarthy and his representatives haven’t locked in a new project, most in the industry don’t believe the director is likely to take a step to big studio movies. Partly that’s because his unflashy directing style hasn’t earned McCarthy the same kind of attention as, say, “The Revenant” helmer Alejandro G. Inarritu. But it’s also because McCarthy is the kind of filmmaker who would much rather write and direct his own stories; if the screenplay and best picture Oscars for “Spotlight” give him leverage in Hollywood, it’s simply to make more of them.

Throughout there’s been a sense of personal decency for McCarthy. He has generally earned a good-guy image in the chatty film world. On Sunday night, as executives at Open Road Films and Anonymous Media — the distributor and producer of “Spotlight,” respectively — waited for him to arrive at a post-Oscars party at a West Hollywood restaurant, they noted the role that McCarthy’s favorable reputation might have played in the tight race for best picture.

Hard to avoid in the “Spotlight” victory story is the turnaround aspect. Much has been made of Inarritu’s prolific work pace. But McCarthy, too, had a movie at the fall festivals in 2014. It was “The Cobbler,” a fable-cum high-concept action comedy starring Adam Sandler that was dissed by many critics and was a commercial flop.

The film was a leap to a new genre, and McCarthy was honest about how the backlash affected him.

“The critical reaction was difficult,” he said in an interview in the fall. “It’s like the athlete who had a bad moment or game — you’re emotional and passionate. You’d be lying if you said you don’t feel it. But in the end, it reinforced that all we could do is the work. The reviews for ‘The Cobbler’ came out while we were working on ‘Spotlight.’ And what they really did was just reinforce my desire to keep going.”