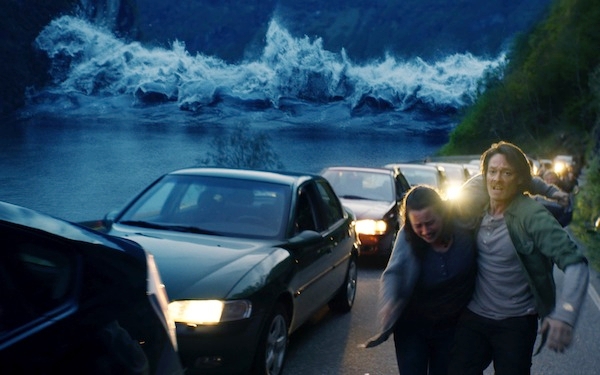 The power of a disaster film relies on its ability to instill a distinct set of fears within the viewer. Feeling like it could happen to you and that there’s an inescapable fate awaiting you around any corner is why we have an almost masochistic fascination with the genre. The Wave, however, is different. Forget what happens to LA or New York or any other metropolis when faced with the unstoppable forces of nature. No, this time, we’re going to a small, picturesque Norwegian village, where most of us haven’t been and probably will not go—especially after this flick—but, due to its emphasis on the individual within a tightknit community, the power of destruction becomes something more, something chilling.

As the first Norwegian disaster film ever (!), The Wave at first seems like a flippant attempt at battling its loud Hollywood counterparts that for years have been ceaselessly destroying our most recognizable cityscapes. While director Roar Uthaug (Cold Prey) wanted to give a proper nod to us Americans who really like to mess s**t up, he always wanted to refocus The Wave to incorporate something that many of our favorites, or at least the first that come to mind, lack—a heartbeat. Does he do that effectively? Often, yes.

The entire frame of the story is set within the confines of one of the most breathtaking span of mountains in Norway in the small but bustling tourist village called Geiranger. The reason it attracts adventurers from across the globe is also the reason for much trepidation from the people that study it: the mountain Åkerneset. Nestled just below this gorgeous giant and its range, Geiranger remains in constant—and real life—peril due to the fact that Åkerneset is constantly chipping away, as a crack that increases 15 cm a year threatens to cause the entire mountain to fall into the water, inevitably causing an 80 foot tidal wave that would completely wipe out everything in its path, including Geiranger, in just ten minutes.

It’s not a matter of if, but when, and that’s why Kristian (Kristoffer Joner, The Revenant), one of the scientists who has been keeping watch over the mountain’s movements for several years, finally decides to take his wife Idun (Ane Dahl Torp) and kids to move on to bigger and better things, namely a job in oil.  Of course, the day of the bittersweet move, something seems to halt Kristian in his tracks. At first glance everything seems to be its normal quiet… until its not, and that’s when the 10-minute countdown begins.

The madness that ensues is only focused on the actual disaster for a minute portion of the entire movie. The wave, which truly is huge and entirely terrifying, comes and goes in a matter of minutes, but its in the build up and aftermath where Uthaug tries to explore that idea of intimacy and thought that may go unnoticed in other directors’ hands.

And in seeing whether or not he pulls it off, I’m surprised by my instinct to compare it to Titanic, where a very small group of people is affected by a catastrophic event. The reason that film was so affective—besides the effervescence of 90s Leo—was its detailing of the intrapersonal relationships of many of the ship’s occupants.

This is the direction Uthaug goes, or at least attempts to go, for much of the set up before the water sweeps everything away. Joner, who may not be the most memorable lead in a disaster movie ever, is still able to find that nice balance between playing the role of father, husband, and scientist, and ultimately the glue that brings the whole community of Geiranger to one central point of dramatic focus.

We begin to follow Kristian as the trudges through the rubble to find his family and save whoever he may come upon, and the situations that confront him are tough enough to make us turn in on ourselves and ask what we would do if this were us in his shoes. That being said, when we see his family’s perspective, stuck in a hotel boiler room, the situation becomes a little more farfetched to make that reflection period all of the sudden disappear. In the end, however, the nerves that The Wave strikes end up leaving a lasting impression, enough so that fellow press members and myself refused to get into an elevator that was malfunctioning ever so slightly.

So, yes, there may be some stretches in the script that often throws inconveniences in some pretty silly places, especially when it seems like there should be plenty given the horrid circumstances, as well as a super melodramatic ending that may play too much into the Hollywood list of expectations, but over all, we can find enough emotional weight, terror, and straight up geographical beauty in The Wave to make us look forward to the next disaster film Norway may have up its sleeve.

In Theatres (The Nuart in L.A.), On Demand, on Amazon Video and On iTunes March 4th! Visit the official website for theatre locations and to purhase tickets near you.