Homeless college student shows true grit in her pursuit of a home, degree 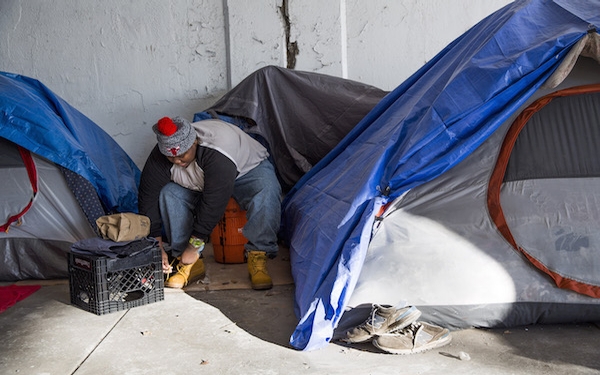 CHICAGO — On a frigid winter morning, Latia Crockett-Holder, 23, emerges from her tent beneath a crumbling overpass in her stocking feet.

In the dim viaduct, where the streetlights are out and water drips from melting icicles like stalactites in a cavern, Crockett-Holder pulls two sheets of baby wipes from a box to wash her face. She squirts toothpaste from a small tube directly into her mouth, brushes and spits into the street.

Then Crockett-Holder laces up her boots, slings a book bag over her shoulder and heads off to the No. 148 bus a block away. She has a 10:45 a.m. economics class at MacCormac College in the Loop.

Crockett-Holder is studying criminal justice and dreams of a career in law enforcement.

It’s an unlikely goal for a woman living in the tent city that has sprouted beneath an overpass in Chicago’s Uptown neighborhood. For the last five months, she’s lived in an overstuffed tent that she shares with her husband and his stepfather. Inside the tent, she wears a headlamp to study.

She’s been saving money from government assistance in an effort to get into an apartment.

“I could get (more) done in the house and not being in the tent doing homework,” she said. “That’s like the hardest thing ever. You’re bunched up in one tent and you can’t stay focused. You hear people outside your tent arguing and you can’t study.”

Young people like Crockett-Holder will be the subject of an upcoming study by the University of Chicago’s Chapin Hall research center. Starting in May, the center plans to conduct a first-of-its-kind count of homeless and runaway young people in more than two dozen communities across the country.

Researchers will attempt to survey homeless people from ages 14 to 24 in urban, suburban and rural communities. The resulting report is expected to produce state and national estimates on the number of homeless young people and, hopefully, serve as a boilerplate for future research and policy, according to Bryan Samuels, executive director of Chapin Hall.

“Part of the beauty of doing it for the first time is that we’ll do it, publish it and make it all available to everybody, so everything behind the estimate can serve as a methodology that others can improve upon over time,” Samuels said.

The Chapin Hall initiative deviates from biennial homeless counts mandated by the U.S. Department of Housing and Urban Development. Those counts are carried out in the last week of January, typically the coldest time of year, with the thought that it’s the best time to get an accurate count of homeless people in shelters.

Last year, researchers counted 6,786 people in shelters and on the streets, nearly 2,000 of them 24 and younger, according to a report from Chicago’s Department of Family & Support Services. The HUD-required counts have “historically focused on adults,” who are more likely to take advantage of shelters and other services during the winter, Samuels said.

In recent years, social service agencies in major cities have added youth-specific counts. After performing its first supplemental youth-specific count last year, DFSS declined to do one this January in the hope that Chicago would be included in the Chapin Hall count.

Crockett-Holder said she has been homeless for much of her life. After a dispute with her family in west suburban Melrose Park, she bounced between homeless shelters, where often a nightly lottery would determine whether she would have a bed. She eventually settled for sleeping under the viaducts of Uptown, often with nothing more than a pillow and blanket.

That’s where DFSS workers found her during the city’s general homeless count in late January. They pleaded with Crockett-Holder to come to a local shelter, but she refused. She told them she was applying for a two-bedroom apartment she thought she could afford and hoped to be moving in on Feb. 5.

“We try to focus on getting them off the streets on a cold night like this,” said Lisa Morrison Butler, the department commissioner. “Our homeless outreach teams, they’re out here three days a week checking in with people and offering them shelter again and again and again. Sometimes they don’t trust us in the beginning. We have to keep coming back and offering them. And, maybe, on the 50th time, they say, ‘Yes.’”

The next day, Crockett-Holder headed off to school. She sat in the back row of her sociology class, scrawling in her notebook as professor Joanne Howard engaged students on the topic of poverty.

“We think poverty can be eradicated,” Howard said. “We also think it will not be eradicated in our lifetimes. We’re a little pessimistic in the room.

“But we think that our primary and secondary groups can assist us. What are some of lessons we learn from them?”

Students came out with a number of answers. “Interaction.” “How to be self-sufficient.” “Emotional development.”

“Dysfunction,” one student said to his classmates’ laughter.

Howard had learned Crockett-Holder was homeless only about a week earlier when she went to each of her professors with a doctor’s note indicating she was having emotional issues as a result of medication she was taking.

Crockett-Holder went on to divulge she had been suffering from depression because she was homeless. She assured her teachers she’d be better soon, since she expected to be moving into an apartment.

“A number of students, especially first-generation college students, have various hardships,” Howard said in an interview later. “I’ve had students who were autistic, students who were blind, and students with various disabilities and different aspects of mental illness and depression. So Latia is not very different from them. But she has a lot of resilience, and I appreciate that.”

Crockett-Holder interviewed with the manager of the building where she hoped to land an apartment. But the move-in date came and went without a call.

After several weeks of waiting, she was still living in her tent, coming to terms with her disappointment.

In the middle of one of her recent classes, however, Crockett-Holder was surprised by an email from the building manager. Crockett-Holder and her family are moving into an apartment.

On Sunday night, she enjoyed a few final moments with her tent city neighbors, wearing a beaming smile.

“We’re moving off the streets,” she said.