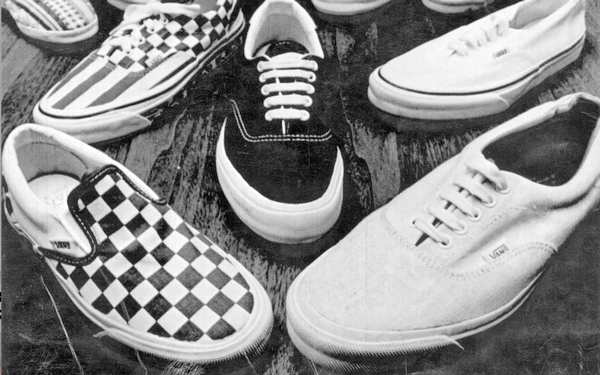 ANAHEIM, Calif. — When the Van Doren Rubber Co. threw open its retail doors in Anaheim on March 16, 1966, the business was so new many of the boxes on the shelves didn’t even have shoes in them. But there were samples to try on. Somewhere between 12 and 16 customers (accounts vary) placed orders for the company’s rubber-soled canvas deck shoes that had to be manufactured on the premises overnight and picked up the next day.

Faded color photographs of that first factory show an unassuming building painted warehouse white, with a storefront almost willed into existence through a few hundred square feet of brick and stone. A wood-paneled station wagon parked out front seems to take up half the block.

That building, that day and those dozen or so pairs of freshly cut, assembled and boxed shoes could have been just another blip on the radar of 1960s manufacturing, but it turned out to be something much bigger. The Van Doren Rubber Co. would become Vans, makers of the super-casual SoCal footwear with the waffle-bottom sole that goofy-footed its way into our collective consciousness.

That Vans, which has come to symbolize Southern California youth culture, is old enough to join AARP is surprising enough, but, as it notches the half-century mark, Vans isn’t just surviving, it’s thriving.

“In 2004, Vans was a $325-million business annually and essentially breaking even — making no money,” said VF President and Chief Operating Officer Steve Rendle. “Fast-forward to where we are today: Vans is our second-largest brand at $2.2 billion [in 2015 revenue], and they are one of our most profitable businesses.”

Vans’ journey from storefront start-up to global lifestyle brand has as many curves as a skate park. Along for every moment of the ride has been Steve Van Doren. Now 60, the son of company co-founder Paul Van Doren is officially vice president of events and promotions. But unofficially he is brand historian, mentor and keeper of the family flame.

In advance of the bashes, Van Doren — who is scheduled to hit several of the global birthday parties with Vans-loving skateboarders Tony Alva and Steve Caballero, no less — ushered a reporter into his Cypress, Calif., office to talk about the brand’s past, its present and where it might be in another 50 years.

The space is crammed with fantastical footwear. An enormous pair of high-tops bears signatures of employees around the world. A 50th anniversary slip-on — reserved for employees only — sits on his desk. The heel logo has the word “family” stamped in gold glitter. On the wall above Van Doren’s head is a framed picture of a pair of feet. It’s a wedding picture of his daughter, Kristy, and her husband wearing custom Vans.

“I had hers made out of the same fabric as her dress,” Van Doren said, beaming with pride for Kristy Van Doren-Batson, who is not only his daughter but also his senior director of events and promotions.

Steve Van Doren cites two factors that helped the fledgling business survive. An early embrace by SoCal skate culture, plus the company’s ability — and desire — to churn out custom shoes.

That part of the Vans story began two years before the company was founded when his father, then an employee of Massachusetts-based Randolph Rubber Co., came to Southern California from Boston in 1964 to help turn around a Garden Grove factory. By the next year, he and his employer had parted ways — but before he left, an encounter with surf legend Duke Kahanamoku planted the seed for a future business model.

“My dad was down in Huntington Beach,” Van Doren said. “Duke Kahanamoku was there, [surfers] Fred Hemmings, Corky Carroll and Paul Strauch were there too, and they all had these navy blue Hawaiian shirts on … . My dad said: ‘Duke, I can make you a pair of shoes out of that Hawaiian shirt … ’ Duke gave him Fred’s shirt, my dad went back to the Randolph factory and made a pair of shoes for him.”

Randolph briefly sold versions of the aloha-print slip-on in 1965 (vintage pairs have been valued at $3,000 in online forums), with Vans reissuing its own version over the years.

Determined to build his own shoe business from the ground up, Paul Van Doren teamed with his brother, James Van Doren, and business partners Gordon Lee and Serge D’Elia. By early 1966, the wheels were in motion, and in March, the Van Doren Rubber Co. sold its first shoes. The very first style was a lace-up canvas deck shoe known as the Style 44 Authentic.

Skateboarders were early fans. “They adopted us, no ifs, ands or buts about it,” Steve Van Doren said in a 2009 interview with The Times. “When you’re skateboarding, you tend to wear out one shoe because you’re dragging it to brake or you’re sliding with it. And the shoes were $8 back then, and they could buy one shoe for $4.”

Vans signed Stacy Peralta as its first sponsored skater and, later, Alva. In 1976, they helped the company create the first dedicated skateboarding shoe.

If there was a single stroke of luck in Vans’ first two decades, it was the black-and-white checkerboard, a pattern so much a part of the brand DNA it covers millions of pairs of Vans, the facade of company headquarters and even a tricked-out Fiat in the parking lot.

In “Fast Times at Ridgemont High,” Sean Penn wore his own checkered pair as part of his Jeff Spicoli wardrobe.

“‘Fast Times’ definitely put us on the map,” Van Doren said. “We were about a $20-million company before the movie came out, and we were on track for $40 million to $45 million after that.”

But the brand’s biggest break nearly became its undoing.

“In 1982, my uncle decided we should do athletic shoes — we actually had two shoes in Runner’s World,” Van Doren recounted, “and we ended up with running flats, basketball, volleyball, wrestling and even break-dancing shoes. We poured all the money from the [success of the] checkerboard into that stuff, but it wasn’t us.”

In 1984, Vans filed for Chapter 11 bankruptcy protection, from which it emerged in 1986. Two years later, the co-founders sold the company to banking firm McCown De Leeuw & Co. In 2004, it was purchased by VF.

For the last dozen years, the parent company has let the design, sales and marketing sides of the Vans business do their own thing. Between that hands-off approach and Steve Van Doren’s longtime role as standard-bearer of what Rendle calls “the Van Doren spirit,” it’s easy to forget it’s not a family-owned business.

But it’s VF’s less-sexy “back of the house” functions — infrastructure, finances, sourcing and manufacturing — that have the brand poised for growth after 50 years.

“We see this as a brand with tremendous upside,” said VF’s Rendle, noting that Vans globally has “less than a 2 percent share” of the footwear categories in which it sells and describing a growing Asian market — which has had years of double-digit growth — as “completely untapped.”

New footwear categories are part of the strategy (though don’t hold your breath for wrestling or break-dancing shoes), including kicks that are likely to get more traction outside of SoCal.

“We introduced a Mountain Edition Collection two years ago, which includes winter versions of our footwear and apparel,” he said, “with water-resistance, insulation and a traction-driven sole that’s a reverse version of the traditional [Vans] waffle sole.”

What the Vans brand might look like when it turns 100 is anybody’s guess (one can hope for checkerboarded honest-to-goodness moon boots on the lunar surface), but given the successful synergy between the founding family and Vans’ corporate parent, it’s hard not to imagine a Van Doren in the mix.

“Baylen will 52 by then,” Steve Van Doren said, a smile slowly creeping across his face. He’s referring to his grandson and Kristy’s son, Baylen Batson. This particular day happened to be his first day of preschool.

Kristy, 38, who has worked alongside her dad since childhood (“I used to be paid in Barbie dolls,” she jokes), takes out her smartphone and pulls up a photo of her son. Completing his outfit is a brightly colored pair of Vans.

“He’s really into ‘The Lion King,’” Kristy said. “So I had an artist I know in Europe hand-paint him a pair.”

The fourth generation seems to be starting off on the right waffle-soled foot.