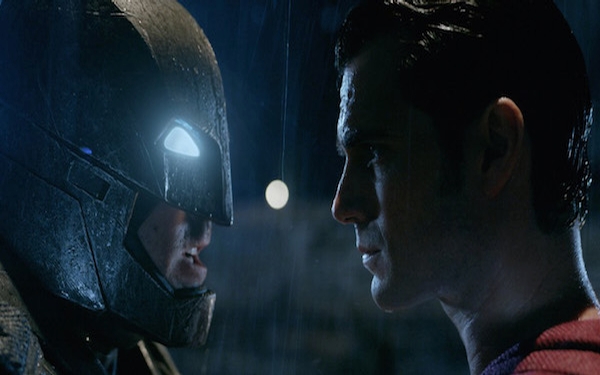 Forget Hillary versus the Donald. Hollywood has its own clash of the titans coming, and it’s likely to be yuge.

Comic-book fans have long debated who would win in an all-out battle between two of the superhero realm’s most formidable icons, Batman and Superman. In director Zack Snyder’s “Batman v Superman: Dawn of Justice,” in theaters March 25, that heavyweight title bout — which has been depicted numerous times in the comics, most famously in Frank Miller’s classic 1986 series “The Dark Knight Returns” — will finally play out on the big screen.

A follow-up to Snyder’s 2013 “Man of Steel,” the superhero mash-up sees a vengeful Batman (Ben Affleck) taking on Superman (Henry Cavill), whom he views as a threat to humankind, even as a mutual foe emerges in the form of psychopathic tech genius Lex Luthor (Jesse Eisenberg). Budgeted at $250 million, “Batman v Superman” represents a critical gambit in Warner Bros.’ bid to expand its DC Comics cinematic universe, teeing up a long-awaited movie featuring Wonder Woman — introduced here by Gal Gadot in a breakout supporting role — as well as other standalone superhero movies and a larger team-up Justice League film that will unite all of DC’s marquee heroes, a la Marvel’s “The Avengers.”

On a recent afternoon, we spoke with Affleck, 43, Cavill, 32, and Snyder, 50, about the supersized stakes behind one of the year’s most highly anticipated comic-book epics.

Q: There’s been an incredible amount of scrutiny aimed at this movie. From the start, fans have been picking apart every nugget of news, every trailer, every rumor. What does it feel like to be on the other side of that? Is it possible to tune it out?

Snyder: The tweets, comments, articles, blogs — it’s insanity. I tune it out to the extent that, when it’s really dumb, then we go, “OK, someone stomp this (rumor) because it’s stupid.” But mostly I just go, “Thank God they’re talking about the movie.” The fact that they care enough to get online and either rage or praise — that’s just cool for the culture, for the fans.

Affleck: Nobody tweeted about “Casablanca,” and look at how they did. (Laughs) From directing movies myself, at this point I always feel too enmeshed with it, where I get this panicked sense of like, “Is it good? It’s horrible, right? It’s going to bomb.” But I have a little more sense of remove from this. I feel relaxed and I’m proud of the movie and excited for people to see it. It’s a much nicer feeling. I’m so glad I’m not Zack.

Q: How did the idea of putting Batman and Superman together in one movie first come up?

Snyder: It was born from a conversation about what to do with Superman (after “Man of Steel”), what to face Superman off against next. I was also really interested in expanding the comic book universe. I think Chris (Nolan) did an amazing job with those three Batman movies he did, but to me those worlds are very self-contained. If Green Lantern came into the Dark Knight movies, you’d be like, “That’s weird.”

I really wanted the “Man of Steel” world to be a world where other DC characters could exist. So I was talking to Chris and I said, almost off the cuff, “What if Batman was the bad guy?” And once you say that, you can’t take it back. I mean, who’s a better guy to fight than Batman?

Cavill: What I love about the fact that we’ve introduced these two really important characters as well (in Batman and Wonder Woman), with these two fantastic actors playing them, is that we get to finally expand upon this incredibly rich DC universe. I think it would be a waste just to have one hero from this DC universe and focus on him when there’s so much opportunity to tell really good stories using everyone.

Q: The obvious question you face right away is, how do you actually have these two battle? Batman has amazing fighting skills and weapons, but Superman is basically indestructible and could just throw him out to Saturn if he wanted to.

Cavill: (Deadpan) I should have thought of that at the time.

Affleck: It’s a credit to what a good guy Superman is. Put it this way: It takes an hour of storytelling to make it plausible. You don’t just ring the bell at the beginning and they go out and start fighting like “Alien vs. Predator.” (To Cavill) Have you seen the Rock ‘Em Sock ‘Em Robots toy with me and you, where we just pummel each other?

Cavill: No, that’s awesome! I want one of those!

Affleck: We should have done that movie. Just a three-minute short.

Snyder: It’s cool to have the setup where it’s like, “This guy is a man. This guy is a god.” They do fight, and the fight is compelling. That’s the fun — that you have these two titans of that universe, and we got to use that playground to set them at each other. And the mythology is so rich, you can mine it all day and it allows all the subtlety and the nuances and the motivation for the conflict.

Q: Ben, you’ve said you were initially reluctant about playing Batman. You once said starring in “Daredevil” “inoculated” you from ever playing another superhero.

Affleck: I just thought it wasn’t a good fit. But I went in and met with Zack and saw this kind of visual 360 of posters and drawings and action figures and animatics — and I was totally blown away. All of the sudden I saw something I’d never seen before and hadn’t even imagined.

This genre is the biggest forum for telling stories in the world right now. You get the biggest megaphone. But this movie is using the genre to explore really interesting themes. And just for me personally — you mentioned “Daredevil” — I thought, “I want to be in one of these movies that works.”

Q: There have been several actors who’ve played Batman over the years. How did you set about making him your own?

Affleck: You’re right, he’s been played by a number of great actors — obviously most recently by Christian (Bale), who’s an amazing actor and was directed by Chris Nolan, who’s a genius. You don’t want to just try to do that because you’re not going to live up to it. So the idea is to do something different but that also exists within the canonical realm of what is still considered Batman.

What I liked about Zack’s vision for it is that it’s sort of an existential Batman. He’s a guy who’s not actually in the throes of being Batman but looking back and asking himself, “Was it worth it?” He’s a graying Batman and more of a slugger and more of a man because he’s more vulnerable. He’s feeding some hole inside him — (burning a brand into) criminals at night, going to these underground fights, having some woman in his bed from some random encounter. He’s functioning, but not in a healthy way. He’s a haunted and broken guy.

Q: The first time we see Batman in this movie, it almost plays like a scene in a horror movie.

Affleck: Exactly. It’s like out of “Se7en” or “Aliens” or something, which is a really different vibe. My son still watches the Adam West “Batman” (TV series). It’s a far cry from where it started.

Q: Henry, this movie also brings some new darker dimensions to Superman, whom we often think of as just the simple embodiment of pure goodness.

Cavill: Right, certainly in some previous live-action adaptations of Superman he’s been — I don’t know if “simplified” is the right word but something around there. But there is a complexity to Superman that is very prevalent in the comic books. It’s just a matter of bringing it out, which is tricky to do.

Snyder: Because we’ve had the experience of the Dark Knight movies, we’re generally open to a complex Batman. But I think — I hope — “Man of Steel” started the conversation about what a more complicated Superman would be. He loves just as hard and has as much at stake in relationships as anyone, and you don’t know where he’s going to go when you put pressure on him and threaten his loved ones.

Q: Ben, when it was announced you were playing Batman, the Internet went nuts — and not in the most favorable way. Were you prepared at all for that reaction?

Affleck: Yeah, I wasn’t totally up to speed with the extent to which the Internet can react to this stuff, and Warner Bros. was like, “Look, we just want to give you a little heads-up.” And they kind of briefed me on the reactions to some past casting choices: negative reactions to Heath (Ledger) being cast as Joker and other past stuff I wasn’t even aware of.

In my experience, the truth is, if your work is good, people are going to like it. If it’s bad, people won’t. The rest of it is just speculation. It’s like when a team drafts a player: Fans can speculate, but you’ve got to wait until the season starts to see how they play.

Q: Did the negativity hurt your feelings at all?

Affleck: I’m pretty grown up about this stuff. If I had my feelings getting hurt about stuff that was said on the Internet, I would have been gone a long time ago, my friend. (Laughs)

Q: Last month, “Deadpool” proved to be a giant hit. What does it say to you about where we are in the evolution of the superhero genre that this R-rated, irreverent comic-book movie resonated so much with audiences?

Snyder: It’s interesting. When I had my initial meeting with Chris Nolan about doing “Man of Steel,” he said to me, “‘Watchmen’ is a movie you made too early.” Because that movie was written deep into comic-book culture, as a way of exploring the why of heroes within pop culture. “Deadpool” shows that audiences have now gotten to the point where they can understand the satire of the genre. Before that, audiences were like, “I’m not ready for that. I’m not there yet.”

Q: That said, “Deadpool” was made on a much smaller budget and wasn’t necessarily expected to be a massive hit. This movie is almost the opposite of that: The budget and the expectations are huge. How do you see the stakes?

Affleck: Look, in the broad sense, from a long-term portfolio perspective, Warner Bros. has already won. They own this vast underexploited (intellectual property) that is DC. They’re going to make all these movies regardless. Will every DC movie be great and be successful? No. Would it be good if “BvS” works for them? Yes, obviously. But if any one of the movies doesn’t work, it doesn’t mean it all goes away. “Green Lantern” didn’t work, and Green Lantern is going to come back and work for them.

Zack spent two years of his life on this movie, and we put in months and months. We are truly, deeply invested in this movie. We want the movie to be good. We want to be proud of it. I want to make a movie that my kids think is cool. It’s not just us punching the corporate clock. You know, you get up at 5 and go to work at 6 in the morning and put on the suit. It’s not particularly fun and sexy to roll around in a rubber suit fighting a stunt guy.

Cavill: (Scoffs) Says you. Whatever, prude.