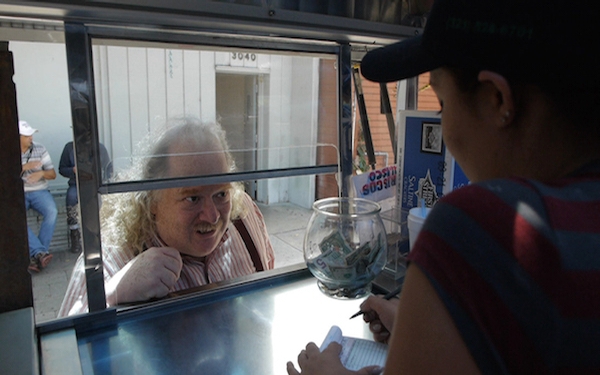 An amiable documentary about an extraordinarily well-liked critic, director Laura Gabbert’s “City of Gold” follows its subject, Jonathan Gold of the Los Angeles Times, as he drives his Dodge pickup from Oaxacan restaurant to Ethiopian joint to his favorite Southern Thai place (Jitlada, on Sunset) looking for his next great, cheap, aromatic meal.

The film will mean one thing, or set of things, to those living within a few miles of his recommendations and another thing to those who haven’t been following Gold’s writing since Ronald Reagan was in office. The selling points here, as with any food documentaries, are the many close-ups of glorious-looking food bubbling on a stove, much of it prepared and served in food trucks or in tiny strip mall locations.

Gold’s palate is expansive and democratic, and he’s a terrific writer (the first to win a Pulitzer for restaurant coverage). First published in the LA Weekly, Gold’s “Counter Intelligence” dispatches became rolling accounts, grease-stained and loving, of his native city, one entree or taco or bowl of peppery stew at a time.

He wrote, and writes still, about the way LA’s first-generation cooks from all over the globe become a crucial part of the geography and spiritual fabric of their surroundings. “Culinary mapping” is how urban planning expert Michael Dear describes Gold’s profession in “City of Gold.” Not long after the 1992 riots, an LA friend of mine told me that the only thing holding the city together was Jonathan Gold’s columns. And he was serious. As one New York chef interviewed for the film says: “His empathy level is higher than anyone else’s.”

The onetime cellist and full-time punk-rock aficionado did more to redraw the image of the haute-cuisine restaurant critic than any other human. In the film we learn a few basics about how Gold met and married editor Laurie Ochoa (now the Los Angeles Times Arts and Entertainment Editor), with whom he has two kids; the very real monetary value Gold’s lavish praise has meant for so many fledgling restaurateurs; and Gold’s own views on criticism, which he conveyed in a UCLA commencement address excerpted in the documentary. “Criticism is criticism,” he says. “An aria is in some way equivalent to a well-cooked potato.”

Other critics (even restaurant critics) must contend with so many forgettable, so-so or worse examples of what they cover in a given year on their beats. Gold, by and large, does not. He’s a goodwill machine, accentuating the positive by ignoring the vast middle ground of the usual and the lame. He visits a restaurant three, four, sometimes a dozen or more times before writing and prefers not to take notes while eating. (“You could take notes while you’re having sex, too, but you’d sort of be missing out on something,” he says.) We learn from “City of Gold” that he has a procrastination problem; one editor and friend, Peter Meehan, speaks of nearly “psychotic levels of email and phone and text harassment” required to get Gold to turn something in.

On camera, Gold is good, easy company; he doesn’t have a wearying “on” quality, which is nice. The whole movie’s nice, maybe too nice. Director Gabbert doesn’t push her subject into anything too uncomfortable. At times in “City of Gold,” the serenely adoring perspective, composer Bobby Johnston’s soothing music and the drone’s-eye view of the city blend into a pretty sort of blandness — something Gold himself, a cultural gatekeeper and kingmaker of boundless curiosity, would never champion in his own writing.

Still, it’s a tasty primer on the man, the eater, the critic and the city.

MPAA rating: R (for some language)