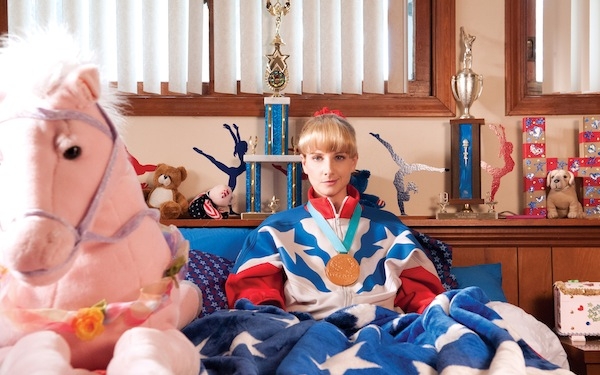 They say good things come in small packages, but clearly they, whoever they are, have never met Hope Ann Gregory. She’s a gymnast—a former gymnast—who won a medal at the Olympics—a bronze medal—and after sustaining a career-ending injury still clings to the pride and glory that the third prize brought to her, however minutely, all those years ago. And when I say pride and glory, I really mean straight up disillusion about a fame never quite attained but fabricated and stretched to the point of no return. This is The Bronze, and it’s not the comedy you’re expecting this spring time.

Written by the little lady who also stars as Hope, aka, every dad’s nightmare, Melissa Rauch (“The Big Bang Theory”) along with her husband Winston, The Bronze is the encapsulation of the madness of celebrity, where even the tiniest taste of it can go straight to someone’s head and completely blind them from the often harsh truths of her real, un-famous, unimportant life. We watch as Hope is given the opportunity to coach the next leading gymnast of now, with a big fat cash reward attached to it, and now must confront the possibility of being replaced, erased, and forgotten.

The Rauchs, very much unlike the leading character who has no boundary between illusion and disillusion of her true standing in the world, were able to tap into their own reality of mediocrity way back when to make Hope’s that much more relatable.

Melissa recalls, “This came out of when I started to have just a little bit of success and was starting to get recognized. I went back to my hometown in New Jersey and I got a free Wetzel’s Pretzel at the mall and was so excited, so stoked. Winston and I sat there eating this pretzel—like, it tasted so good. We were like ‘this is so amazing, this is so cool.’ Winston and I even got them to throw in some extra cheese sauce—we kind of took advantage. It was for a VH1 show I was on and a little while later the show was cancelled. So we went back and the same manager at the mall totally pretended like he didn’t know me, charged me for the pretzel. I was in this really weird place, looking for a new job, and feeling bad about myself, and not getting that pretzel just felt like pouring salt in my wounds. Again, it’s such a small thing, but that’s when we started talking about the fickle nature of celebrity and what that can do to a psyche if you really do start to feed into it.”

Playing Ben, aka Twitchy, one of the few people in her hometown who truly craves to see what Hope is really made of underneath all the cuss words and free-Sbarro hustling lifestyle is Thomas Middleditch (“Silicon Valley”), and to him, that layer of gooey melancholy of fame’s fickleness is something, as actors, that was something easily tapped into.

“[Celebrity] is quick and no matter how prickly you play that character, Melissa’s character Hope, there’s an inherent built in sort of sadness to that; someone who’s clinging onto this ‘afraid and of fame’, especially when their ‘afraid and of fame’ is kind of undercutting it at the same time, like famous for being third place. The movie starts off in that tone. I think great comedy, well at least in all my favorites, has sadness in it to something. Sadness or some kind of dystopia going on and this has it,” Middleditch proclaims.

That sense of deeply engrained self-doubt is much of what drives Hope to say and do all of the seemingly outrageous and illogical things that she does, and for Melissa, finding a director who wasn’t afraid to tap into both the often uncomfortable truths boiling under the surface as well as the free-flowing crassness of Hope’s psyche was essential to bringing their baby to life. And so they found Bryan Buckley, a mogul of commercial directing, as well as the director of the 2012 Oscar nominated short Asad.

Melissa explains, “He didn’t want to water it down in any way, which was really important to us. I think there is all this pressure on female characters to be likable and making them palatable across the board. That was something we definitely didn’t want to do with this character and he was 100% on board with that. He said, ‘unapologetic, all the way.’ He’s a visual and creative genius; I can’t say enough good things about him. When we were meeting with directors, it was sort of our baby and it kind of felt like an adoption for us. We asked ourselves ‘is this an open adoption?’ And it very much was. It was such a team effort all the way through.”

For Sebastian Stan (“The Martian”), who plays the Hope’s rival Lance Tucker, having both Buckley and Melissa, as star and writer, on set, provided a wealth of creative energy that allowed for The Bronze to grow into itself in a truly organic way.

“I always think it starts with the script, and you always have to honor the script and the writer in my opinion, especially if it’s really well written. That’s your source material, so to speak. To have [Melissa] on set, to work off of her, and ask ‘hey, how are you feeling about this; is this close to what you were thinking?” Because her and Winston were so open to us making these characters our own, was just even easier,” Stan remembers.

With that kind of effortless environment of support and small-town charm brimming throughout the production of The Bronze, the product becomes embedded with that rich gooey center of compassion and care while still churning out a delicious dose of despicability that makes Hope Ann Gregory’s story one for the podium.