Audit: UC schools harm California students by admitting so many from out of state 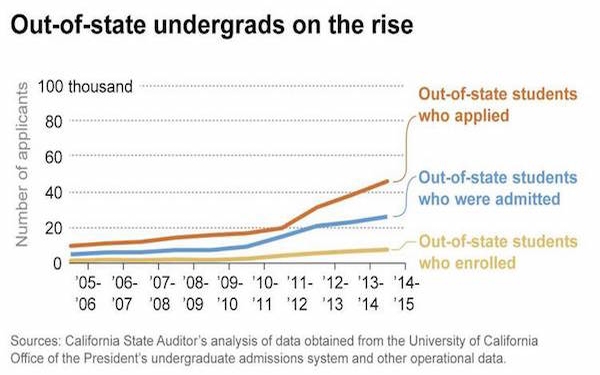 LOS ANGELES — The University of California has hurt the state’s students by admitting so many out-of-state applicants to its campuses and should be reined in with tough restrictions, according to a sharply critical state audit released Tuesday.

The audit recommends stricter entrance requirements for nonresident students, a cap on their enrollment and greater recruiting efforts of Californians — particularly African-Americans, Latinos and other underrepresented minorities.

The audit was requested more than a year ago by Democratic state Assemblyman Mike Gipson, who has expressed concerns that the tripling of nonresident students since the fall of 2007 has hurt Californians — especially minorities. Students from other states and countries have grown to 13 percent of the system’s total undergraduate enrollment, up from about 4 percent eight years ago.

“Over the past several years, the university has undermined its commitment to residents in an effort to increase its revenue by recruiting and enrolling nonresidents,” the audit said, adding that UC practices have particularly hindered minorities.

“Because of the significant harm to residents and their families resulting from the university’s actions, we believe that legislative intervention, as outlined in the report, is necessary to ensure that a university education once again becomes attainable and affordable for all California residents who are qualified and desire to attend,” state auditor Elaine Howle said in a letter released with the audit.

The audit found that resident enrollment increased by only 10 percent over the last 10 years while out-of-state students rose by 432 percent. Nonresidents benefited from lowered admission standards, while California students increasingly were turned away from their campus of choice, the audit found.

The audit’s conclusions were denounced by UC President Janet Napolitano. She said that an unprecedented cut in state support for the 10-campus system prompted the effort to recruit more nonresident students, who pay higher tuition.

“To suggest from the outset that UC decisions regarding admissions were designed to ‘disadvantage Californians,’ as opposed to mitigate the impact of a 33 percent budget cut, is a rush to judgment that is both unfair and unwarranted,” she said in a March 8 letter included in the audit.

UC officials insist that nonresident students don’t displace Californians. Instead, they say, the $23,000 in additional tuition that nonresidents pay each year has allowed UC to enroll thousands more California students than the system could otherwise afford.

Without the extra money from out-of-state students, Californians could have faced an additional $2,500 in tuition — a 20 percent boost, Napolitano said. Tuition and fees have doubled since the 2008 recession, but have stayed flat — except for one fee increase — since 2011-12 as part of an agreement between Napolitano and Gov. Jerry Brown for more than $3 billion in new dollars over four years.

In a separate agreement, UC agreed to admit 5,000 more California students for the fall 2016 term in exchange for $25 million more and a continued lid on tuition increases.

“Providing adequate state funding is the best way to increase the number of California students enrolled at UC,” said a special report on admissions and finances released Tuesday by university officials.

The report made the case that UC policies “overwhelmingly favor” California residents over nonresidents. The system guarantees admission to at least one campus for all eligible California applicants — those in the top 9 percent of their high school class who maintained at least a 3.0 grade point average while taking a battery of English, math, science, foreign language and other required classes. No such guarantee is offered to nonresidents.

Californians are also admitted at higher rates, with 71 percent accepted to at least one campus of choice compared to 55 percent for nonresidents. And, the report said, Californians are eligible for much more financial aid, including access to three state scholarship and grant programs that have helped more than half of UC’s undergraduates to enroll without paying any tuition or fees.

Hans Johnson, a senior fellow at the nonpartisan Public Policy Institute of California, said UC’s decision to enroll more nonresident students in the face of dramatic budget cuts was defensible.

But he said he favored reducing their numbers, as they now make up more than 20 percent of undergraduates at the most popular campuses, UCLA and UC Berkeley.

With fewer nonresident students, he said, more Californians could win admission to their top campus choices. Today, thousands of qualified students who are turned away from their selected campus are offered a seat at UC Merced, even if they did not apply there.

Gipson and others have raised concerns about that practice because those referred to UC Merced are disproportionately Latino and African-American.

But with fewer out-of-state students, UC would need to make up the financial loss with more state dollars or higher tuition and fees, Johnson said. In his view, higher tuition should be considered, so long as financial aid for low-income students increases accordingly.

The state finance department, however, has said that UC also needs to control its costs. The audit recommends a biennial cost study and a review of how to reduce $13 billion spent on staff salaries in 2014-15.

UC officials said they have reduced costs aggressively and will continue to seek new ways to do so.

Gipson also asked that the audit investigate UC’s progress in equalizing funding per student across campuses. An earlier audit from 2011 found that the four undergraduate campuses with more underrepresented minorities received about $3,600 less per student, on average, than the five campuses with fewer minorities.

UC explained at the time that campuses with more graduate students and health sciences programs — such as UCLA, UC Berkeley and UC Davis — for instance, were more costly to run. But officials have since revised their formulas and expect state dollars will be equitably distributed by the 2016-17 school year.

Gipson also asked for a review of the compensation paid to UC’s top executives.