Yung Lean is, at present, having a moment 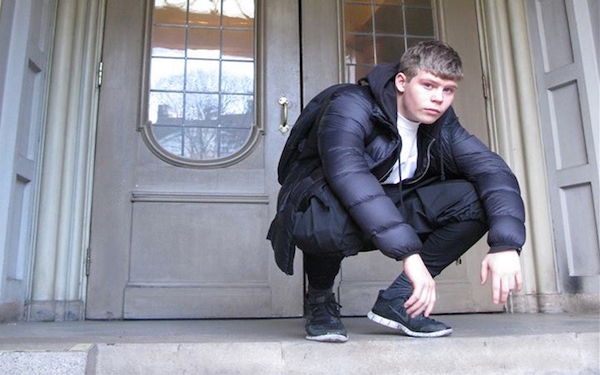 Yung Lean is the nom de rap of 19-year-old Swede Jonatan Leandoer Hastad, who is currently having a moment. Yung Lean is an invention, a character, like Lil Wayne or Eminem or Mr. T. He is famous in a way that is possible only in the mid ‘10s: He’s Internet famous, huge on Tumblr, YouTube and SoundCloud. This enables him to regularly sell out shows in American big cities without the benefit of tools that used to be considered vital, like radio play, or the backing of a major label.

Lean doesn’t like to talk much about his family, or his personal life, or about anything, really. His possibly excessive sense of reticence is directly at odds with the bare-it-all, selfies-and-fanfic fanbase that birthed him. He struggles with this. Ask him if he ever looks himself up on Tumblr, and he sounds genuinely horrified. “No, I don’t do that. It’s an ego boost. I wouldn’t want to do that.”

Fame in general, even the qualified fame of an Internet rapper, is proving difficult to manage. “Yeah, for sure I don’t really care for it. I don’t like taking pictures, that’s very cringe. I turn some people down because I have a life, you know? I can’t just walk around and take selfies all day. That’s for Justin Bieber, that’s not my job.”

Lean’s songs are famously about nothing, and about nothingness as a general condition. He mumble raps, often more deftly than he’s given credit for, about very American things like Arizona Iced Tea and North Face, and universal things like clothing and weed.

The fans who like him, like him a lot, which is fine with Lean. Not great, but fine. “If someone comes up to you and says, like, ‘Oh, I really like this song, this speaks to me,’ you know? That makes sense. But if you only want to take a selfie and show it to your friends, it’s more of a popularity statement, and I don’t really (mess) with that. I prefer a proper conversation with someone who cares about my music.”

Lean is on the phone from a conference room in New York City, days before his sold-out show at Webster Hall. He speaks with the forced politeness of a teenager who has been told he must make conversation with an adult. By the sound of it, he’s playing a very loud video game at the same time.

Lean, who was raised in Stockholm, made his first mixtape in Swedish, when he was 11. “I started rapping in English when I was 14,” he recalls. “It came naturally. I just listened to English music, so when I was thinking about lyrics, they were just in English. Sometimes, it can be honest in Swedish. Too honest.”

Lean leads a crew of friends who call themselves Sad Boys, which includes his producer Yung Gud. Their output (a mixtape, an EP, and two studio albums, including the just released “Warlord”) is logy and trap-influenced, heavy on Auto-Tune and angst. Google “Yung Lean,” and the phrase “existential apathy” comes up a lot.

So does the phrase “elaborate parody.” In the three years since Lean uploaded his first online hit, “Ginseng Strip 2002,” debate has raged over whether anyone that miserable could possibly be serious. For Lean’s fans, his mostly morose songs about nothing speak to the very real anomie of being a teen, while his detractors roll their eyes at the exaggerated miseries of a millennial white kid.

Until recently, the latter category included most of Sweden, whose citizens never took Lean very seriously, and with whom he has claimed to have a love/hate relationship. “I guess I do,” he says. “It’s like, if you meet a person and they don’t like you directly, and then they like you because someone else likes you, that’s sort of how my relationship with Sweden was. People would follow me as a joke, then when people in the U.S. started (enjoying) my music, they were like, ‘America likes it. We have to like it.’ I remember that, you know? I won’t forget.”