Ezra Furman is, first and foremost, a songwriter 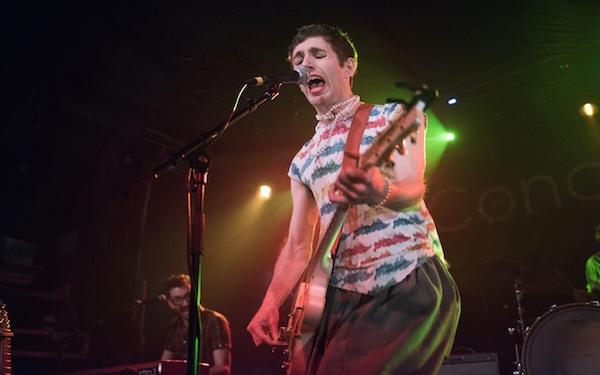 Ezra Furman has gotten rave reviews as a striking live performer. But he thinks of himself as a wordsmith first. “If I had to claim one role, it would be songwriter,” he says. “I feel like it’s my primary job.”

The indie-pop singer-songwriter shines on his current release, “Perpetual Motion People.” His sound echoes the punkish melodicism of the Velvet Underground and the ragged brio of the Violent Femmes. Furman’s confessional numbers address identity, confusion, loss and empowerment. “Sometimes the wound hurts powerful indeed/ but sometimes you just got to let that sucker bleed,” he sings in a raw voice on “Hour of Deepest Need,” evoking the sad and spare country of Lucinda Williams.

Furman, 29, called recently from his current home in Oakland, Calif. This is an edited transcript.

You’ve been making music professionally for a decade. You were embraced in Europe before recently getting traction in the United States. What was the breakthrough moment for you?

I made the record “Day of the Dog” (in 2013). I thought, “If this doesn’t work I don’t know what will.” The record came out. I toured around America for two months to empty clubs. I decided I couldn’t do it anymore. I decided to stop being a touring musician. A few weeks after that decision was made, I got a five-star review in the Guardian. They were playing me on the radio (in Europe). I thought, “OK, we’ll go there now. It should be interesting. But this is the last tour ever.” Then things picked up in a whole new way. I think it really helped me to have a sense of giving up this yearning for success and acceptance. There were a few stages of getting more and more to that place. I still have that mindset. I don’t care so fiercely about what’s going to make people like me.

Your lyrics are deeply personal. Do you hear from fans about your songs?

Yes. Maybe the most satisfying part of my job is to talk to people who have used these songs in their lives the way I’ve used music to make sense of the pain of living. As a fan, I use songs as a place to live. When people do that with my records, it’s such a heart-stopping honor. My songs have a theme of coping with the illness at the core — mental illness and problems of identity — that go bone deep. For those people who have problems with being human, it gets them reacting and wanting to talk to me. I love it. It’s really validating.

In “Body Was Made” you sing: “Your body is yours at the end of the day/ And don’t let the hateful try and take it away.” It’s a powerful declaration of self. Where were you in your life when you wrote that song?

I was coming through this breaking point. It was a long road for me. I found that I spent a lot of time hiding some stuff about myself that I was told was an aberration. Being bisexual was one thing. The drive to dress feminine was another. Coming out is telling people, “Hey, I’m bisexual” or “This is how I dress now.” But there’s the much more muddy and drawn-out process of trying to shake the habit of hiding things from people. You lie to people, withdraw and just live with low-level shame and evasiveness. I was putting a lampshade on my soul. It’s a bad habit. My whole life has been trying to get rid of that. At some point, I realized I had to start, and that it was going to take a lot of positive energy to fight that negative energy. I had to make a loud affirmative sound. I’ve been introducing “Body Was Made” as a song for someone who felt ugly, then angry, then happy — in that order, then cycling back through it.

You’re writing a book about Lou Reed’s 1972 album “Transformer” for the 33 1/3 series of music books. How is that going?

I’m excited. I’m deep in it. There’s something about “Transformer,” both consciously and unconsciously, that is concerned with identity and flux. I think I share something with Lou Reed from that era, this insistence on transcending a type. That applies to gender as well as genre and the type of artist that he was. He was honestly not settled on any of those things, and I think that’s what makes him fascinating. He was transforming. It’s great to hear on record, and it got me writing and thinking.

What kind of music did you listen to as a kid?

I was a solitary music listener. Not that I didn’t go to shows and share stuff with friends. But the transformative moments were late at night alone in my bedroom with music. When I was 10 years old, I would stay up late with my cassette player. I was obsessed with (a tape) that had Billboard’s top 10 hits of 1961. It had “Blue Moon,” “Runaround Sue” and a great doo-wop song called “Daddy’s Home.” When I was around 12, I heard punk music for the first time. I thought, “This is mine. This has something to say to me.” That’s when I started finding out about bands. Green Day was the gateway band to all that punk rock. It’s a good start for a 12-year-old.

When did you start to play music and write your own songs?

I am a ravenous music listener. It was something I wanted to study very early on. When I was 12, I was borrowing someone’s guitar. Then I got a guitar for my 13th birthday. I started (writing songs) right away. It was almost why I started playing guitar. For whatever reason, I had low self-esteem in most areas of my life. But musically, I was very cocky. I found out later that my parents wanted to take my guitar away because I was horrible — a terrible, terrible singer. But I had no concept, no inkling, that what I was doing didn’t sound great. I was hearing a symphony. (laughs)

You’ve mentioned your Jewish faith in the past. How important is spirituality in your life?

I am observant. I pray three times a day with lapses. I observe Shabbat. I don’t work on Friday night or Saturday in the day. Those are the outward facts. Inwardly, it’s a whole world to me. It’s like the storehouse of wisdom that is so deep it just goes and goes. It’s the thing I’m most in love with other than music. I use it like music — to find the doors inside my head that lead to other interesting places.