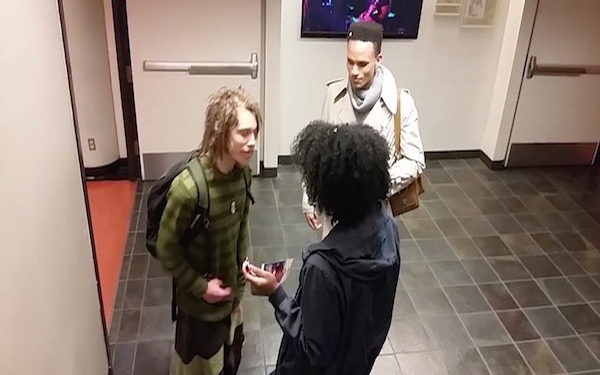 San Francisco State University said Tuesday it was investigating an incident captured on video in which a black woman confronted a white man on campus for wearing dreadlocks.

In a video posted on YouTube on Monday, the man and woman can be heard arguing in a hallway about his hair.

"You're saying that I can't have a hair style because of your culture? Why?" the man said.

"Because it's my culture," she said.

The man tells her that dreadlocks were part of Egyptian culture and asks her, "Are you Egyptian? Nah, man, you're not." She asked him if he was Egyptian, and he told her no.

He responded: "You know what, girl ... you have no right to tell me what I cannot wear."

In the video, the man tried to walk away, but the woman stopped him, continuing to ask where Egypt was. When he tried to go around her and go up a nearby set of stairs, the woman grabbed his arm, trying to stop him.

"Yo, girl, stop touching me right now," he said. "I don't need your disrespect."

He came down the stairs, and she said, "You put your hands on me, you're going to learn."

When the man walked away, the woman asked a man taking video, "Why are you filming this?" and appears to put her hand in front of the camera.

San Francisco State officials said in a statement that the confrontation happened on campus Monday and that university police were called to the scene when it happened.

Although the title of the video — which had more than 130,000 views on YouTube on Tuesday — says the woman was a campus employee, university officials said none of the people shown were employed by San Francisco State.

"San Francisco State University promotes the rights of the campus community to engage in free speech, but does not condone behavior that impedes the safety or well-being of others," the university said. "We are taking the matter seriously and will promptly and thoroughly investigate this incident through applicable University channels, including our campus student conduct procedures."