Richard Linklater’s ‘Everybody Wants Some!!’ is bigger than it looks, deeper than it seems 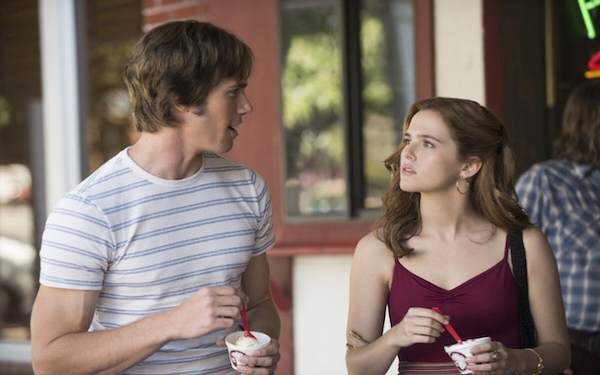 Zoey Deutch and Blake Jenner in "Everybody Wants Some!!" (Van Redin/Paramount Pictures)

Richard Linklater may be the biggest maker of little films in American cinema. With his regionalist specificity and divining-rod intuition for the emotional core of even the most inconsequential moments, his movies often mask their own perceptiveness. His latest, the ostensible college comedy “Everybody Wants Some!!” is like a stream that looks shallow but once you’re in the middle of it reveals an unforeseen depth.

Written and directed by Linklater, who has taken to calling it a “spiritual sequel” to his high school-set 1993 film “Dazed and Confused,” the new film is his first since 2014’s “Boyhood.” That 12-years-in-the-making project dared to expand the mundanities of everyday life and the simple notion of time passing into something grandly epic. In “Everybody Wants Some!!” the excitement of the title’s twin exclamation points are in counterpoint to the casual vibe conjured up, as the film examines the comradery and internal competitiveness within a baseball team at a regional Texas school in its off-hours and how all the players’ bravado and shenanigans come together once the team is on the field. The little things matter and add up.

Linklater himself played baseball at a small Texas college, and so for all its ease, the film has a constant undercurrent of emotional truth. Over the course of a Thursday afternoon to a Monday morning the weekend before classes start, the players find themselves moving from their ramshackle housing to a disco, a country bar, a punk club an and art student party, maybe changing their shirts a bit to fit in more from place to place.

The stand-in for both Linklater and the audience in entering these overlapping realms of college, the team, the different social spaces, is a newly arrived freshman pitcher named Jake (Blake Jenner). He quickly picks up that as they move through these realms, they are dabbling as if at some kind of personality buffet, trying a bit of this and a touch of that. Yet they also make that feel somehow genuine, an ethos best articulated by the self-styled philosopher and pick-up artist Finnegan (Glen Powell, giving one of the film’s standout performances), who eventually reveals a level of both insecurity and self-understanding that is otherwise masked behind his bluster.

The film is also set very specifically in August 1980, so that the cultural 1970s are not quite over but the 1980s have not yet really begun. A campus campaign booth for Jimmy Carter is just about the only nod to current events in the film, as it is more concerned with the expressly personal than even the implicitly political.

Setting the movie in something of a cultural transitional zone also allows for a wide range of music blasting from car windows, stereo speakers and in local haunts. From the showboating hard rock strut of the Van Halen song from which the movie takes it title to spaced-out stoner jams that sit alongside disco, funk, punk and new wave, music is always percolating in the background of their lives. Something of a show-stopper set piece is five guys in a car bopping together to the early hip-hop of “Rapper’s Delight.”

Eventually these baseball players actually play some baseball, and all their disconnected moments and experiences begin to form a cohesive whole. A self-aggrandizing pitcher played by Juston Street — who provides the film with some of its strongest, and strangest, comic relief — faces off against the team’s star and leader, played by Tyler Hoechlin. They exchange heated words and a fierce confrontation on the field, but moments later come to a moment of mutual, quiet understanding conveyed with only a few words and a convivial pat on the butt (that gesture having been previously played for laughs before suddenly gaining an unexpected, unspoken resonance). Baseball is portrayed as a team sport that nevertheless celebrates the individual, what one player calls the “inner strange,” where the idiosyncratic and esoteric can still contribute to something larger.

Wyatt Russell is also noteworthy among the cast as a flaky pitcher from California, as is J. Quinton Johnson as an older player most tuned in to easing the transition for his newest teammates.

“Dazed and Confused” had a less centralized story, as there was a wider swath of characters across grades and social spheres that it showcased as co-leads, including scenes featuring the experiences of girls outside the view of guys. In comparison, “Everybody Wants Some!!” feels slightly diminished: By sticking so close to the experiences of a team of ballplayers it is often trapped with the 1980 attitudes of a group of young men and the way they talk and act about women when on their own. While his players do show an at-times nascent sensitivity, Linklater stumbles with some gratuitous T&A and an incongruous scene of female mud-wrestling.

Actress Zoey Deutch is sweet as a girl pursued by Jake, but as the only significant female role it winds up feeling slight. If Linklater hadn’t gotten the boy-girl divide so spot-on in “Dazed and Confused,” the internal conflict over the depiction of women and men in “Everybody Wants Some!!” wouldn’t feel so glaring.

It shouldn’t spoil much to mention that the film ends at the beginning of the first class of the school year. Whatever is to be officially taught will likely not much compare to what will be conveyed on the ball field and off, in bars and on walks and just hanging out. School may just be starting, but the lessons have already begun.

Rated: R, for language throughout, sexual content, drug use and some nudity