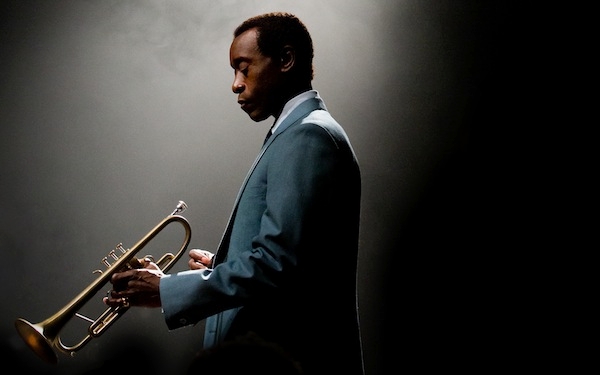 Despite the pedestal and the ideals of perfection we bestow upon them, us cultural undertakers like to see our legends torn and battered. Lucky for us, many of the most significant actors, musicians, and artists happen to be just so, which also often is the cause of their curated genius.

So if we look at Miles Davis, the jazz musician who stole listeners’ hearts with a simple blow of his trumpet over the course of his nearly half-century career, we see the imperfection, we see the frayed edges of a man split in half by his personal and musical urges. If we look at Miles Ahead, Don Cheadle’s directorial debut about the man with the brass machine, we see that polar rift in action, but much like its iconic subject, the film remains imperfect, and unlike its iconic subject, it unfortunately doesn’t reach any legendary status.

As an actor who has, I think, won much of the film world’s respect through some breathtaking bouts on screen, Cheadle (Hotel Rwanda, Crash) saw the life of Miles Davis as something that needed the time and proper wherewithal to be captured cinematically. On numerous occasions the Davis family approached Cheadle with hopes of bringing Miles to life due to the uncanny resemblance and spirit the two share, yet he always felt a distinct trepidation about finding the right person to bring it to life. He then realized that, hey, who better than himself? And so, Cheadle took to the director’s chair, co-wrote the script, and cast himself as the star himself in Miles Ahead.

And does he pull all of it off? Only sometimes, and that unpredictable push and pull of its success ultimately becomes the most frustrating aspect of Cheadle’s final product.

Chronicling the period at the end of Miles’ hiatus in the late 70s, Miles Ahead embodies what happens when the cogs of genius have slowed their turning. He’s recorded one session that rests in his file cabinet, yet refuses to give it to Columbia Records until they pay him his due so he can fund his drug and alcohol habits. It’s when the young, rambunctious Rolling Stones journalist, Dave Brill (Ewan McGregor) knocks on his door, eager to find out what the master has been doing in the quiet of his den, that the clouds of stupor have a chance to clear away. Of course, writing groundbreaking music is not that easy, but that’s the fun of art, isn’t it?

Shot on a short budget—a budget ultimately realized with the help of the crowd-funding site IndieGogo—and in a relatively short time frame, Miles Ahead pulls off a viscerally stimulating and entertaining screen experience. Employing many adept hands across the board, including cinematographer Roberto Schaefer (Quantum of Solace) and sound designer/editor Skip Lievsay (No Country for Old Men) this particular fragment of Miles Davis’ life, which is probably his most ignored, becomes instilled with proper chaos, frenetic energy, and momentum that we may all associate with Davis’ music.

On top of that, the performances by both Cheadle and McGregor provide a distinct vivaciousness to the period piece, where both contagious funk and indisputable darkness comingle like brothers. While Cheadle stars in every scene and does do a solid job at honing in on Davis’ many quirks, it is arguably McGregor who stands out the most with his eager cheekiness and surprising warmth he brings to Brill.

There’s more to be questioned, however, in the written narrative that Cheadle and co-writer Steven Baigelman crafted surrounding this tumultuous state of Davis’ career. While the team was able to steer from most conventions of the biopic genre—something that can quite quickly become inundated with tepid accounts of fame’s fickleness and evils—Miles Ahead still suffers from some other ailment.

Perhaps we can call it a shadow or an echo, as the tale ultimately becomes muddled among all the other tales about artists who lose control of their art and then themselves. Walking out of the theater, I found myself considering biopics that left me thinking about the individuality of the person who suffered and made others suffer for what they created, and ultimately the human that rested at the core of it all, like Ray and Walk the Line.

By the end of Miles Ahead, however, thoughts drifted toward how similar Miles Davis was to the artists of the former films, rather than how much of an impactful and complicated individual he was in his own right. And knowing how much Davis and his music has made this world sway, that is a big blow to Cheadle’s project, and an unfortunate one.

MILES AHEAD comes to the theaters Friday, March 31st.