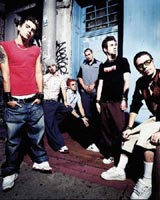 The room was filled with an immense amount of energy all night, which was reinforced by both bands’ spirited performances. Head Automatica’s Daryl Palumbo’s flamboyantly convulsive stage presence, coupled with the band’s dancey-rock feel, had everyone in the crowd moving and bouncing their heads, eager for more of this new blend of the best elements of Palumbo’s Glassjaw and collaborator Dan the Automator’s grooves. Live, Head Automatica sounded almost as good as they do on their debut record, set for release this July.

Lostprophets literally took the stage from Automatica, though, and got the capacity crowd jumping. Lead singer Ian Watkins took the mic, singing tunes such as the popular "Last Train Home" and their newest single "Wake Up (Make A Move)" off their album Start Something. Suddenly, one of their roadies was overtaken with heart-pumping excitement and ran out onstage to sing with the guitar-swinging, stage-diving British rockers. Lostprophets were on their game and have graduated from being rock’s underdogs to being full-fledged rock stars.