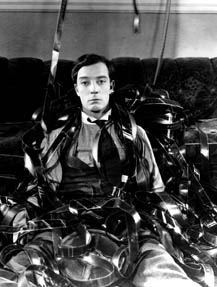 I confess, I didn’t know most of the old-time movie actors and actresses in the enlarged, framed black-and-white photos that line the theater walls in the country’s only silent movie theater. Since we had time before the show, I looked around to see who might be able to identify those faces.

My new friend Harvey not only pointed out the icons – Clara Bow, Rudolph Valentino and Charlie Chaplin – but every last one of those glamorous faces, before going on to add background information about the movies associated with those images. A retired schoolteacher and longtime Silent Movie Theatre regular, Harvey Thomas spoke about the cleverness of silent films.

In the 1928 classic, The Wedding March, the charming Mitzi (Fay Wray) communicates sweetly and flirtatiously with her true love, the prince, and with absolute disgust and sarcasm with the butcher she is being forced to marry. The best of this era’s actors were clever indeed and must have had a gift for observation, being able to express a range of emotions without overacting. This quick-witted ingenuity had to be conveyed through gestures, rendering words and other literal sounds unnecessary. When Mitzi sneers at the butcher, his beastliness is clearly understood, and in another scene, when she covers her ears and strains her eyes, the viewer can nearly “hear” the rifles shooting through the air.

Seen in its rightful theater context, it is just as much the live musical accompaniment that brings the silent movie to life as it is the performances taking place onscreen. A live organist plays along with every movie shown at The Silent Theatre – but not just any organist. The 92-year-old Bob Mitchell, who appeared in legendary Hollywood films with greats such as Fred Astaire, Bing Crosby and Bob Hope, and performed with Frank Sinatra, is the house organist. At just the right moments, the organ rises to create suspense or surprise. The expressive instrument in Mitchell’s hands seems to “worry” when someone is hurt, and “laugh” with the characters’ triumphs.

The silent movie experience transports the viewer to a bygone era, to a time when things at least seemed innocent. This age of cinema left a legacy of nostalgic films that mirror the decade known as the roaring twenties, with its spirit of pre-depression era optimism and prosperity.