The Wild Feathers & The Shelters ain't no strangers to the road 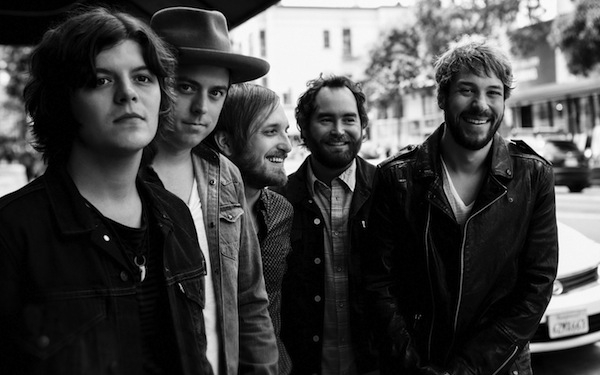 Something about the billowing dust picked up by an old pickup; the endless diners and bars that appear like beacons along desolate stretches of earth; and of course that old crooning of an engine working endlessly to get from point A to point B that all add up to what we call a road trip. For some, the road is a scary place, wrought with the looming ominous of isolation. For bands like The Wild Feathers and The Shelters, however, that same somber loneliness is the gift that keeps on giving.

It all started back at SXSW this year where The Wild Feathers, the latest rock quartet hailing from the musical mecca of Nashville, began their most-beloved aspect of musicianship: the tour. While it’s to promote only their second record Lonely is a Lifetime, these four fellas definitely are not strangers to everything the road has to offer. In fact, all of their music can be attributed to it.

Vocalist and bassist Joel King recalls, “We toured so much for that first record that most of the body of this record was actually done on the road. A lot of the lyric content—I mean it’s called Lonely is a Lifetime, and I mean you kind of feel that way on the road. You’re always around somebody, but it’s still lonely and weird. The whole record has a road vibe, and it’s direct cause from us recording the first record, and touring a year before that to support it. Then we drove like two years once it came out, and then it was just time to make the next one… It all pretty much happened on the road, during sound checks, or just in quiet moments when you had time to knock a few out. So I think it’s natural that we’re road folks, ‘cause it’s all we’ve been doing.”

And he’s not joking; The Wild Feathers have toured over 250 cities in their relatively short career, but it’s that feeling when they climb on stage in front an entirely new set of ears and eyes that the sense of wholeness washes over them. These are the places they need to be, showing the world a sound that is wholly their own.

What is their sound exactly? It’s a drawling, swaying, pummeling rock that is drenched with the dirt of old Americana that has been endlessly soaked up by driving through this wild country. And while they are stationed in Nashville, these boys don’t suit themselves as wannabe country singers or anything of the mocking sort. Instead, it’s the wide variety of musical spirit that embraces the city that so inspires them.

“I think if we were trying to sound like a certain thing, it’d be hard to sell for us, that classic country sound. If I got up there and tried to do that, I’d look like a f***ing idiot,” says King. “You just want to be yourself. But what’s great about the Nashville thing, everybody’s kind of in it, and they really know what music is capable of there. You see it work. Like in Tulsa, the only people making money playing music has a regular job at a casino for ten hours a night. In Nashville, when I went out I saw people living regular lives, actually getting work, getting auditions, becoming writers. You could see the business work, for every kind of music.”

On the same note, The Wild Feathers’ companions on the second half of their tour, The Shelters, find that while their home-base of Los Angeles can indeed be overwhelmed by that constant sense of creative push, their music has been about standing up against the current, no matter how strong it is.

“I guess I hope we would be able to figure out how to fit in to that world, but I think us going into that scene, all of us are just trying to keep true to ourselves,” remarks Josh Jove, vocalist and composer for The Shelters. “It’s about us having our own sound, and yes, being influenced by other bands and seeing what we’re a part of, but not letting the direction of those bands dictate which direction we want to go.  If we feel that we want to go a direction that others aren’t then we aren’t afraid to do it, and we’ll try it, and maybe it will work. I think that people can appreciate a sound that isn’t dictated by its surroundings.”

With their debut album set to be released later this year, this four-man rock band, who pull from a vast collection of influences, such as 60s psych-rock and contemporary surf-rock, The Shelters have a seemingly endless well of sound to tap into and rework to their own unique vision. And with legend Tom Petty producing the album, you better believe the boys were in good hands.

“Working with Tom [Petty] is a blessing, obviously, and a dream come true that anyone would wish to have happen. We learned so much from him, in terms of how to put together a song and how we could—you know we’d have a song that was 90% there and then he’d give that little extra 10% of opinion that would make it into a good song. Just to think that structurally or just giving us tips about lyrics, like ‘Oh, that should be more relatable.’ Those are all the things that he’s very great at. It was such an amazing tool to have with us the whole time, to guide us in the right direction,” remembers Jove.

And so, as both of these traveling bands now find themselves in our lovely city of Los Angeles, set to play at The Troubadour on Wednesday, April 6th, know that they come with eyes full of blurred billboards, lush forests, and the melancholic wonderment of what it means to be boys on the road.