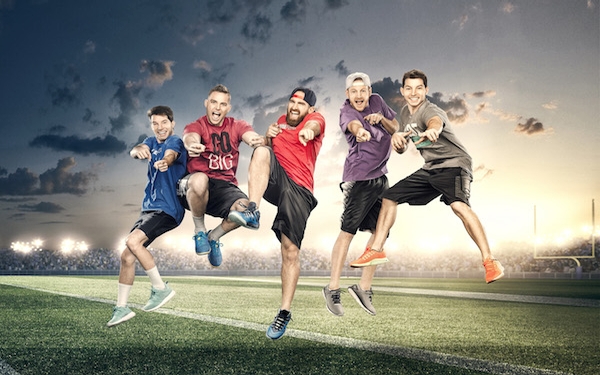 After that, they cemented their internet fame, gaining more than 25 million fans and racking up more than 1 billion views for a series of amazing, oh-no-they-didn’t video stunts that included a nothing-but-net trick shot from the top of Dallas’ Reunion Tower.

Now the Dude Perfect team is venturing into the world of television.

“It’s the next step in our plan for world domination,” says Coby Cotton, who is one-fifth of the group along with Tyler Toney, Garrett Hilbert, Cody Jones and Coby’s twin brother, Cory Cotton.

Don’t bet against these guys. If even a very small fraction of their Internet fan base follows them to TV, Dude Perfect will have a hit and yet another reason for raucous chest-bump celebration.

But if viewers tune in expecting to see a half-hour of basketball-football-golf-archery-and-more trick-shot highlights, they’re going to be surprised, because that’s not what “The Dude Perfect Show” is all about. This show is more character- and comedy-driven.

“Stunts are very important to us,” Coby Cotton says. “It’s what our online presence has been built on. But over the years, we’ve been doing more character development on our online shows. That’s what we want the focus of our TV show to be.”

So while the first episode features an insanely conceived golf-cart/archery battle, there also are comedic bits about baby-proofing their man-cave headquarters (so Garrett’s little one can visit) and teaching intern Chad Terrell how to be cool in the presence of celebrities.

In the follow-up episode, Tyler and Garrett throw down for the honor of driving the pace car at Texas Motor Speedway, while Coby and Cody try not to throw up during a Man v. Food-style eating challenge (involving monstrous 7-pound El Jefe Grande burgers at Kenny’s Burger Joint in Dallas).

“The show is unscripted and very off the cuff,” says Coby Cotton, who runs point on the business side of Dude Perfect. “It’s about letting people get to know us better for who we really are: a group of five best friends who are very competitive.

What makes these guys and their frat-boy friendship worthy of their own TV show?

“These guys are truly an all-American brotherhood that turned a passion into an amazing business,” executive producer Rob Dyrdek says. “This show will give their fans and the world an inside look at their camaraderie and the fun they have behind the viral hits they produce.”

The Dude Perfect guys have been on television before. But it’s surreal, Cotton says, to join a reality TV club that includes the likes of Ozzy Osbourne, Anna Nicole Smith and Dog the Bounty Hunter.

“For anybody who gets involved in entertainment, a TV show is one of those dreams you hope you may have a chance to be part of,” he says. “But it’s still crazy every time we see the previews come on TV.”

“There is all kinds of good stuff coming,” he says. “We continue to work with celebrities and athletes.” Singer Luke Bryan and NASCAR driver Chase Elliott appear in the first two episodes.

“I can’t give away too many details, but we are incredibly excited about some of the folks featured on the show. And the competitions continue to get crazier and, in some cases, more extreme.

“Every single episode has something unexpected and fun about it. We just can’t wait for everybody to enjoy it.”