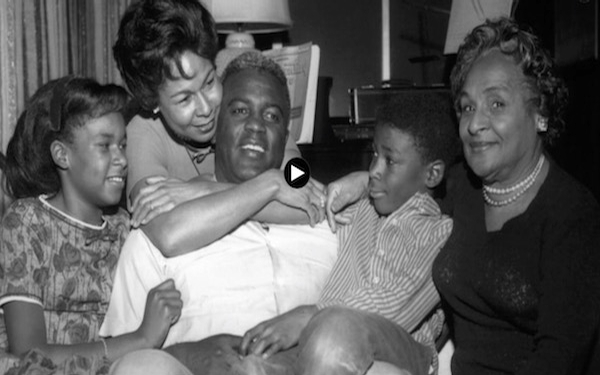 Ken Burns has added another face to the metaphorical Mt. Rushmore of a career dedicated to chronicling great events and people of American history: Jackie Robinson, subject of a four-hour documentary airing Monday and Tuesday over PBS.

Narrated by Keith David, with Jamie Foxx reading Robinson’s words, it’s a lump-in-the-throat trip, inspiring and exciting, through a life that has often been viewed only within the confines of the game he played; Burns widens the view to take in the husband, father, activist, columnist, businessman and political figure, for better and worse (but mostly for the better) an expression of the man.

Burns traces the steps that brought Robinson together with Branch Rickey, the Brooklyn Dodgers’ president and general manager, whose interest in breaking baseball’s color line had a moral and a practical component: There was talent in the Negro Leagues he was eager to use; he hoped a black player would draw black spectators to the park. And he determined that Robinson could take the abuse that inevitably would accompany the promotion, from inside the team as well as without. New York Post writer Jimmy Cannon called Robinson “the loneliest man I’ve ever seen in sports.”

“All my life I had believed in payback, retaliation,” Robinson recalled. “I had a question, and it was the age-old one of whether or not to sell your birthright. Could I turn the other cheek?”

It’s a story of sports and character, civil rights and changing times; it honors the beauty of Robinson’s play as well as the strength of his resolve. And it’s also very much a love story, whose living star is the endlessly impressive Rachel Robinson, the Dodger’s widow and the mother of their three children, whom Robinson met when they were students at UCLA, and whose sense of self was a match for his own. (“Do you have a woman?” Rickey asked him when they first met. Robinson said he did. “Well,” Rickey continued, “you’ll need her.”) Everyone who knew them seems to have regarded her presence in his life as a kind of verification of his own excellence. “I don’t think you would have a Jackie Robinson without Rachel,” says first lady Michelle Obama.

As much as history asked him to stand for, Robinson could only finally stand for himself. Martin Luther King Jr. called Robinson “a sit-inner before sit-ins, a freedom rider before freedom rides,” and he was an active campaigner and fundraiser in the movement. But he was also an independent thinker who regarded himself as “an American Negro first, before I am a member of any party.” It led to what some, including his wife, saw as disappointing support for Richard Nixon in 1960. (He felt John F. Kennedy was too cautious about civil rights.) Later he would work for Nelson Rockefeller when he was governor of New York.

And times were changing. Malcolm X, who had written “Robinson had his most fanatic fan in me,” would later write him, “You’ve lost touch with the black masses.” But Robinson continued to call for equal treatment for African Americans on and off the field, in and out of baseball. Throwing out the first pitch at the 1972 World Series, a little more than a week before he died, Robinson announced, “I’m extremely proud and pleased to be here this afternoon, but must admit I’m going to be tremendously more pleased and more proud when I look at that third-base coaching line one day and see a black face managing in baseball.”

All the Burns stylistic hallmarks are here: the usual unmatchable collection of photos and film clips, interviews with friends and colleagues and fans and scholars, the knitting together of disparate threads, the love of dates and places. As in his 1994 “nine-inning” film “Baseball,” the subject suits the director’s deliberate, even poky pace, and the air of what might be called critical nostalgia that colors all his films. “Jackie Robinson” brings the old world to vivid life, but its messages are for today and any day.