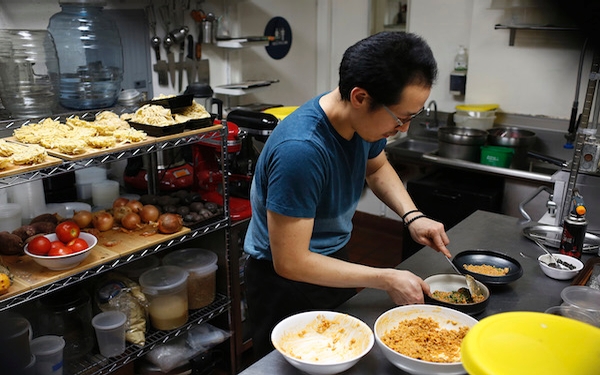 LOS ANGELES — Kwang Uh is quietly focused, placing a few pickle slices in an earthenware bowl. The chef and co-owner of Baroo — a restaurant named for the bowls Buddhist monks use to eat their meals — is composing a plate of noorook, the Korean name for a richly flavored mold, and it’s perhaps the most popular dish at his Hollywood restaurant. Here, the mold lends savory notes to a porridge-like combination of grains, nuts and seeds stained a vibrant magenta with a roasted beet cream. The pink of the rose-pickled onion plays against a bright scattering of micro greens and orange flower petals, the dish topped with a saffron rice chip. It’s an artist’s canvas, a play on texture and over-saturated color.

Driving past the space, you might never guess that Baroo has been nominated for a James Beard Award for best new restaurant — and that it’s been open only since August. Set in a dilapidated strip mall on a quiet stretch of Santa Monica Boulevard, there’s no signage, and the interior is spartan save for stacks of cookbooks, a bookcase full of ingredients in various states of fermentation, and a framed saying Uh attributes to a Buddhist meditation during mealtime: “Where do these meals come from? I don’t deserve them with my own virtue. Putting down all the desires of my mind, regarding this offering as medicine to keep our bodies, we get it to complete the task of enlightenment.” Menu items and daily specials are scrawled on a chalkboard.

Baroo has so far been a wildly successful experiment, a recent addition to the chef and culinary professional circuit. “I never expected this,” says Uh. “I’m grateful, though I feel there is perhaps too much praise. This fuels me to deepen and broaden my cooking, to have more insight about my food.”

Uh, 34, was born and raised in Seoul. Though at one point he considered becoming a monk, he says he also was drawn to film and music — he plays guitar and saxophone — and he’s always loved food.

“My parents would remind me when I was younger, how I remembered various foods, tastes, restaurants, where we ate.” Jamie Oliver was a major inspiration, as was his mother. Uh remembers how “she put so much importance on the family gathering at mealtime, sacrificing herself to prepare all the meals,” Then, at age 19, he got his first cookbook: “Nobu.” “It was mind-blowing. There was this whole different world out there.”

Uh walks the noorook out into the dining room, the calm of the kitchen replaced by the thrum of loud music — today it’s Adele and Jay Z — and a full house. Baroo is tiny: big enough for one communal table, a few chairs against one wall, and three seats at the counter if you shove away Uh’s stacks of cookbooks. There is no wait staff at Baroo; the only employees are Uh and his business partner, Matthew Kim. As each dish is composed, the men take turns in the dining room: serving, smiling at the customers, asking what they think, explaining a dish or component, apologizing for the wait, acknowledging and thanking each person who walks through the door.

Uh and Kim became friends while they were studying hospitality in college in Korea; the idea of opening a restaurant began then, and then resurfaced when they were both in New York, Kim at New York University and Uh at the CIA. Over the next several years, Uh traveled the globe, staging, training or working in a number of kitchens; Noma in Copenhagen, Daniel in New York, Piazza Duomo in Italy, Quique Dacosta in Spain, Nobu in the Bahamas. Kim was in charge of operating franchises for Bibigo, an international food company based out of Korea; his job eventually landed him in Los Angeles, where the friends reconnected.

Baroo was originally conceived of as a one-year plan, a quiet exercise of sorts to explore Uh’s cooking commercially. Both men would work full-time at the restaurant to keep overhead minimal and menu items affordable (the most expensive item is $15). Why Los Angeles? “It’s cheaper than New York or San Francisco,” says Uh. “And so many people are involved in the arts and entertainment — it’s a multicultural city that is very embracing.”

Uh’s cooking is a freestyle blend of inspirations — his Korean roots meet the latest in Nordic and other global trends, at once avant-garde and familiar — and he incorporates both seasonal ingredients (he maintains a small cooking garden at Kim’s house) and is heavy on fermentation. “Raised in South Korea, all meals were served with fermented components or garnishes — it’s in my DNA.” As his own style of cooking has developed and evolved, his interest in fermentation has grown. “It’s so unexpected, natural, complex, subtle and funky.”

Baroo consumes almost all of Uh’s time. “I may work until 3 a.m., do some office work and research, and go to bed at 5. I wake up at 9 or 10 and start all over again.” It’s not uncommon for the chef to sleep at the restaurant. “It saves on commute time.” He still hasn’t had time to find his own place; he stores his belongings and sleeps sometimes at Kim’s house in Santa Clarita.

But Uh is thinking about the future, both his own and his restaurant’s. “I’m grateful for the success, but I haven’t had much time to experiment, though I’m embarrassed and shy to admit this. This was not part of the plan.” With all the attention, he says, “I need to think. And meditate.”

Combine the kombu and water in a saucepan and bring to a simmer over medium heat. Remove the kombu and bring the liquid to a simmer. Remove from heat. Add the shiitake mushrooms and trimmings and simmer very gently for 5 minutes. Remove from heat and strain the solids, discarding them. This makes about 1 quart dashi, more than is needed for the remainder of the recipe. The dashi will keep, covered and refrigerated, up to 5 days.

1. In a nonreactive pot, combine the maple syrup, vinegar, wine, dashi, rose water, peppercorns and leaf. Whisk in the salts. Bring to a boil over high heat, and then remove from heat.

2. Pour the hot liquid over the onions in a nonreactive container, and weight the onions down so they are completely submerged. Cover the container with cheesecloth or a towel, and keep in a cool, dry place for 1 to 2 days to quickly pickle the onions. Afterward, cover and refrigerate until ready to use.

3. The pickles are best if used within 1 week, but will keep, covered and refrigerated, up to 1 month.

Note: Adapted from a recipe by chef Kwang Uh of Baroo restaurant in Los Angeles.