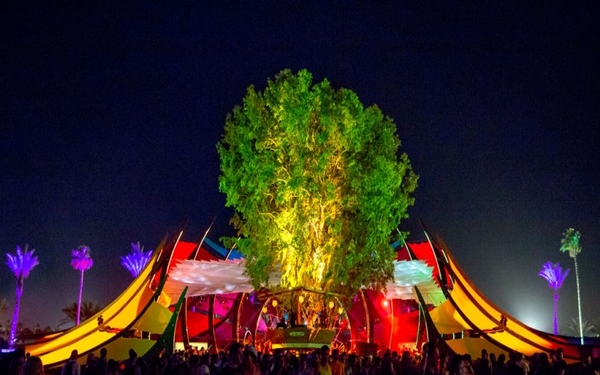 World-renowned, Los Angeles based event producers, Do LaB, are pioneers in America’s festival culture and the masterminds behind Coachella’s wettest and wildest oasis, the Do Lab Stage.

LOS ANGELES — The Coachella Valley Music and Arts Festival is notoriously secretive about its annual art installations until the big reveal on opening day, but the early word is that this year’s festival will boast projects large enough to rival Guns N’ Roses’ big reunion.

“We don’t do anything on a human scale, or even a twice human scale,” he added. “We’re at the absolute limits of what we can fabricate, what we can physically move onto the field. We want visual impact that hits you from hundreds of feet away.”

This year, in addition to performance-oriented acts such as the circus-inspired Lucent Dossier and the Do LaB stage, artist Robert Bose will produce his balloon chain installation for the sixth year running.

Beyond that, organizers said they are going bigger, with more expensive and physically more ambitious works than in years past.

Among the artists is crowd favorite Smith, as well as the Coachella-based Date Farmers (Armando Lerma and Carlos Ramirez), who have also appeared here before. Expect a grandiose, Light and Space movement-inspired piece from Smith. The Date Farmers will go bold and colorful, in line with their Chicano Pop style. They’re creating a 30-foot sculpture of Lerma’s recently deceased cousin.

The other four commissioned artists are new to Coachella and bring global influences. Clemente said it was important to branch out beyond Southern California and “the Burning Man scene,” which is where much of the festival art hailed from in years past. He spent about four months last year scouting new work at the Venice Biennale, the Havana Biennial, Art Basel Miami Beach, Prospect.3 in New Orleans and Crystal Bridges’ State of the Art exhibition in Arkansas, among other events, plus more than two dozen artist studios around the country.

“It’s important to bring ideas, outside from our immediate environment, into the world of our fans,” Clemente said.

Clemente was drawn to Latvian artists Katrina Neiburga and Andris Eglitis after having seen their multimedia “Armpit” installation at the 2015 Venice Biennale. Clemente describes that piece — a giant geometric structure made of reclaimed wood and housing video projections of men toiling in garage workshops — as “the artists’ version of a Soviet-era man cave.” Neiburga and Eglitis will create a version for Coachella.

“It’s a very different piece than anything we’ve ever had at the show,” Clemente said. “The capacity is very limited, it’s very controlled with all these interior spaces, and the video content is very esoteric. There’s a lot of different meaning people can take away from it if they spend the time.”

A gallerist in Cuba introduced Clemente to the work of Cuban-born artist Alexandre Arrechea. Clemente saw a painting of Arrechea’s in a book last year while in Havana; he later visited the artist in New York, where he lives. “I saw the painting and I said to Alex, ‘Can you build this for us?’” Clemente said. “He said, ‘I’d love to.’” The result will be a 50-foot-tall, 140,000-pound sculptural work that comments on global warming and rising sea levels.

Clemente wouldn’t reveal much about the work of L.A.-based, Taiwan-born Jimenez Lai, who teaches at UCLA. He is creating “a complex architectural form, with compound curves,” Clemente said. “I’ve never seen anything quite like it. It’s the largest single thing we’ve ever moved out here.”

For the selfie-seekers, there’s Miami-based R & R Studios, a collaboration between Roberto Behar and Rosario Marquardt, who are originally from Argentina. They’re creating a piece, Clemente said, “that very well might be our most photographed work.” Pucker up for your picture: The massive sculpture is “an undeniable message of love.”

Big is significant because photos of Coachella art live on “and end up to be the iconic images and memories people have from that year,” Clemente said. “So we’re always wanting to outdo ourselves, in every way, every time.”